Golden Globe nominations highlight the need for recognition of diversity 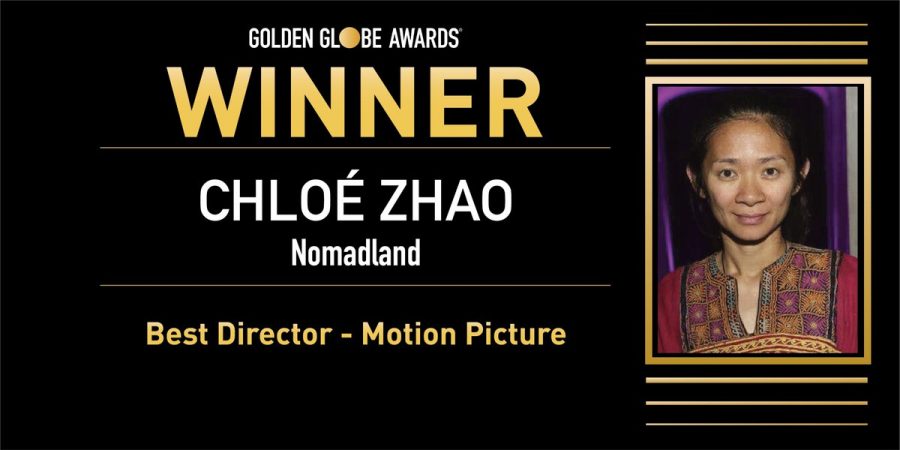 On Feb. 28, Chloé Zhao made history as the first Asian woman and second woman ever to win Best Director for her 2020 film Nomadland.

Almost 40 years after Barba Streisand won the award of Best Director at the Golden Globes for her 1984 film Yentl, Chloé Zhao made history as the first Asian woman and second woman ever to win the title. On Feb. 28, Zhao won Best Director for her 2020 film Nomadland and was nominated alongside Emerald Fennell (Promising Young Woman) and Regina King (One Night in Miami). This year, the majority of Best Director nominees were female, and two of them women of color – a record-breaking number.

Sadly yet unsurprisingly, no woman had won the award since Streisand in 1984. The only other women to be nominated for Best Director at the Golden Globes include Ava DuVernay, Kathryn Bigelow, Sofia Coppola, and Jane Campion. Prior to this year, you could count the number of nominated women on one hand. Additionally, the only woman to ever win an Academy Award for Best Director was Kathryn Bigelow for The Hurt Locker in 2010, and four other women – Campion, Coppola, Greta Gerwig, and Lina Wertmüller – have been nominated for the Oscar.

Hollywood award shows have long been dominated by a narrow, mainly white, male lens. In recent years, award shows have become a prominent vehicle for encouraging social change. Similar to the uproar of support for the Time’s Up movement at the 2018 Golden Globes, entertainers have continued to highlight Hollywood’s representation issues and demand better.

This year, the Golden Globes received backlash as it was revealed that the Hollywood Foreign Press Association has no Black members, highlighting a major lack of representation in international journalism. Many celebrities and nominees called out the organization, which has now promised to increase its diversity and support of underrepresented members of the press.

Another source of controversy this year was the drama film Minari, about a Korean family that immigrates to Arkansas in pursuit of the American dream. The film was nominated in the foreign language category instead of Best Motion Picture, despite being directed by an American and produced in America.

The HFPA has been criticized for the quality of this year’s television nominations as well. Comedy series Emily in Paris was nominated for a Golden Globe, while Michaela Coel’s drama series I May Destroy You was snubbed of any nominations. I May Destroy You features a majority cast of people of color and confronts prevalent issues such as sexual assault, while Emily and Paris has comparatively less representation and nuance.

On the whole, the amount of award show nominations for people of color has increased since last year. This year, 28 percent of SAG Awards nominations went to BIPOC, which is notably more than the Golden Globes’ 18.6 percent, and an overall increase from 2020. The Golden Globes saw diverse nominations in Ma Rainey’s Black Bottom, Minari, One Night in Miami, and others. So, why has Hollywood been so slow to recognize stories that reflect the diversity of our country?

While the amount of diverse stories and perspectives highlighted in film and television has grown in recent years, it’s clear that there is a need for change. Representation in front of and behind the camera is essential, but how long will it take Hollywood – and our country – to fully accept it?