‘Canvas’: a Netflix short film about love and coping 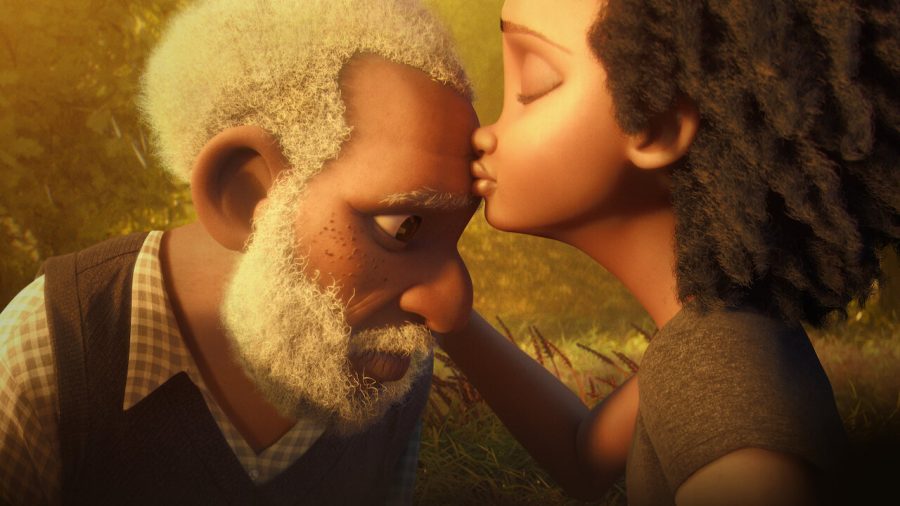 Released on Dec. 11, 2020, Netlix’s animated short film “Canvas” explores the heartbreak of a former artist after the loss of his wife.

“Canvas,” is a Netflix short film that was released a couple months ago along with “Cops and Robbers” and “If Anything Happens I Love You.” It follows an old man and former artist who stops painting after the loss of his beloved wife, but gradually grows to love it again after his curious granddaughter makes a discovery in a hidden room. Although there is no dialogue, the emotion and love is beautifully conveyed through both hand-painted and computer animation.

The film was directed by Frank Abney III, a former Pixar animator, who produced “Hair Love,” an Oscar-winning short film about a black father who is faced with the task of doing his daughter’s hair after his wife is hospitalized with cancer. Abney revealed that the two main characters of his new short film—the man and his granddaughter—were inspired by two important people in his life, his own grandfather and his niece. In an interview with Variety, Abney said, “Kids are so carefree. They navigate the world without the burden of things that we have on our shoulders as adults. It really inspired me to create something.” On the topic of his grandfather, Abney said, “he was very quiet and it seemed like he was always a little withdrawn . . . and that’s how ‘Canvas’ starts to begin; that’s how it began to take shape, actually.”

While watching “Canvas,” I was continuously reminded of the classic novel, “The Secret Garden,” by Frances Hodgson Burnett. In both pieces, a man, broken-hearted after his wife’s death hides symbols of her and sinks into deeper sadness. In “The Secret Garden,” Mr Craven hid the key to the garden that his wife loved to spend time in. In “Canvas,” the main character uses clothing racks to hide the door to his studio, where an unfinished portrait of his wife lays. Mr Craven and the man both experience profound loneliness after the deaths of their wives, which subtly affects the people around them.

But what his granddaughter unknowingly helps him realize is that embracing his wife and celebrating her life instead of shoving it under a rug will help him heal.”

Another similarity between the two works was the role children played. Both Mary and the man’s granddaughter discover these hidden treasures and in doing so, help the two grumpy men make discoveries about themselves. Specifically in “Canvas,” the man thinks his pain will go away if he hides everything that reminds him of her. But what his granddaughter unknowingly helps him realize is that embracing his wife and celebrating her life instead of shoving it under a rug will help him heal.

The movie also happens to feature only black characters, which I appreciated. The animators did an amazing job incorporating the often overlooked features black people have. For example, the main character, an elderly man, has Dermatosis Papulosa Nigra, a skin condition that many people with darker skin face encounter. This skin condition brings harmless black bumps on the neck and face and is more prominent with older people. The granddaughter also wears two Afro puffs on her head, which are exactly what they sound like.

By creating this beautiful black family, this film helps normalize people of color in movies. Oftentimes, people of color aren’t put into animated films unless being a minority has something to do with the plot or their character. Movies such as “Up” or “Inside Out” are both movies that explore human emotions, but have white protagonists. These movies have set the standard as being “white.”

In “Canvas,” however, the family is black. This has nothing to do with the plot itself, which revolves around the inner self rather than the external. What this does do, however, is create a new standard where all races can be cast in all types of movies, not just movies that are about people of color.

“Canvas” is a Netflix short film about love, heartbreak and death that pays homage to classics, but with beautiful new details that haven’t been seen. Although the plot isn’t as heavy as its sister films, “If Anything Happens I Love You” and “Cops and Robbers” it is packed with emotion. Many of us have lost someone we loved dearly. This film teaches us to move forward, while still carrying memories with us. I would definitely recommend this movie as it is touching and might cause you to shed a few tears.