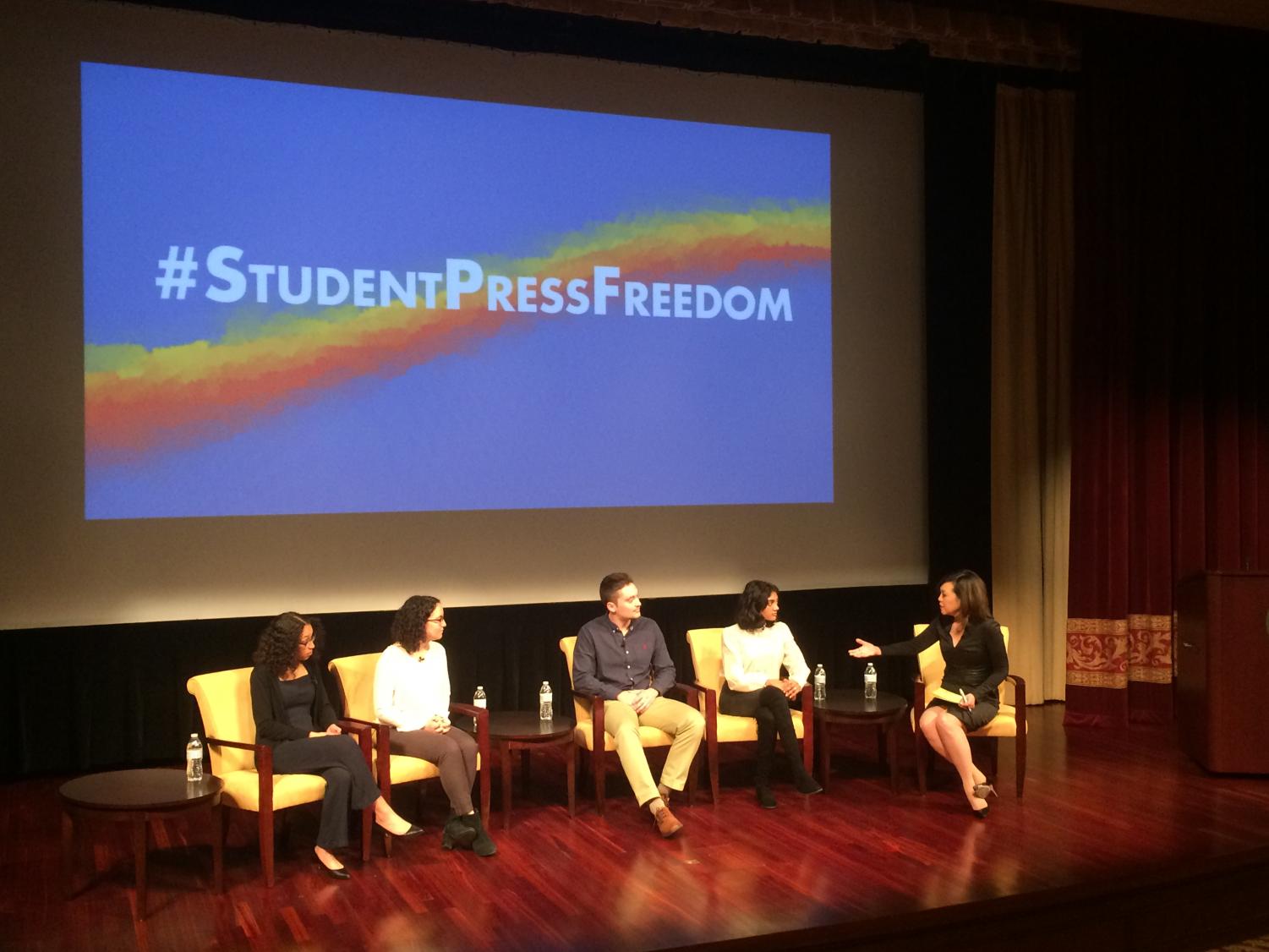 On Wednesday, Jan. 29, which is Student Press Freedom Day, three students from RM’s Advanced Journalism class attended the New Visions of the Future of Press Freedom event, held at the National Archives in Washington, D.C. The event was held in partnership with the Student Press Law Center (SPLC), a nonprofit organization that works to defend and protect the legal rights of student journalists across the nation.

During the event, which was led by SPLC executive director Hadar Harris, audience members heard from four panelists – all current or former student journalists – including Maya Goldman, the editor-in-chief of the Michigan Daily at the University of Michigan Ann Arbor, Kristine Guillaume, the president of the Harvard Crimson at Harvard University, Neha Madhira, the former editor-in-chief of the Eagle Nation Online at Prosper High School and current staff member on the Daily Texan at the University of Texas, Austin, and Joe Severino, former news editor at the DA at West Virginia University and a current reporter at the Charleston Gazette. The discussion was led and monitored by former CBS and CNN correspondent and current host of America Tonight, Joie Chen.

The panelists discussed a wide variety of topics, ranging from the influence of school administrations withholding certain articles to the challenge of allowing marginalized communities to have a voice in the world of journalism. Much of the discussion was also focused on the “New Voices” movement — a grassroots coalition with the intention of developing laws in cities and states across the nation in order to restore student press freedom.

The panelists all brought a wide range of perspectives to the conversation. Goldman and Guillaume, who have both been editors-in-chief of large college student newspapers, spoke about issues with backlash from their communities when covering controversial topics, while Madhira, who has dealt with staff issues while working at her high school newspaper, spoke about the problems facing student journalists whose administration attempted to suppress articles. Severino, who has had experience covering rural communities in West Virginia throughout his college and professional career spoke about the lack of public respect and understanding of student journalism and challenges he faced when covering stories in a more remote location. Additionally, many of them discussed the challenge of being responsible for bringing news to a community where there might not be enough local coverage, known as news deserts.

One important topic discussed during the panel was a major driver for the current state of student press freedom: the landmark 1988 Supreme Court case, Hazelwood School District v. Kuhlmeier, which ruled that the First Amendment allows educators could exercise control over student publications if they had “legitimate pedagogical concerns” about the content of the publication. The panelists discussed this court case and how it has affected student journalists since.

This case reversed much of the rights previously provided to student journalists under the 1969 Supreme Court case Tinker v. Des Moines Independent Community School District, where the Supreme Court ruled that schools could not limit students’ free speech and expression and that students did not forgo their First Amendment rights when going to school. Mary Beth Tinker, who was a plaintiff in Tinker v. Des Moines and a current activist for freedom of speech and the press, was in attendance and commended the panelists and shared her hopes for the future of students’ First Amendment freedoms.

Despite legal battles for First Amendment rights, many of the panelists and speakers during the New Visions event felt that the journalism landscape is still difficult to navigate, especially for young journalists today. Severino furthered this idea as he discussed “fundamental misunderstanding” of the First Amendment today and how it impacts student journalists’ rights and ability to do their jobs. “We have to give high school journalists the same rights as regular journalists,” Severino said during the panel.

The panelists also pointed out that many states lack sufficient legislation protecting the rights of student journalists, such as New Voices laws, which are currently only present in 14 states in the US, and self-censorship is still prevalent in high school and college publications. “A generation of students have been taught to second-guess themselves because they fear censorship,” Harris said.