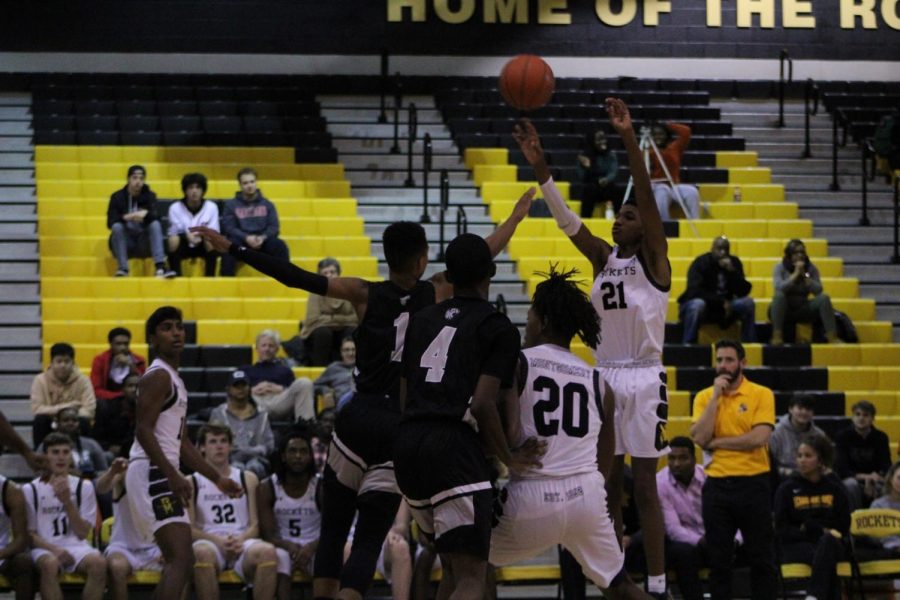 Catch Up with Boys Basketball: Northwest and Gaithersburg

The Richard Montgomery varsity boys basketball team improved their record to 6-2 with a tight win over the Northwest Jaguars on January 9th.

The Rockets started the first quarter by winning the tip only to be stolen by Northwest’s number one, Marcus Stubbs, and score an easy layup. The Rockets bad start was followed by two more consecutive turnovers. In response, Coach David Breslaw subbed his starting five and installed his fast pace offense. This move got the rockets rolling with a three pointer by senior guard Henok Kassahun. The Rockets ended the first quarter leading with a 9-8 score.

The Rockets offense began to heat up during the second quarter. Junior power forward Shaquille Samules had multiple baskets, senior shooting guard Devin Liyanamana had a big three pointer, and junior point guard Jabril Robinson had multiple Layups. A total of 23 points were scored by Rockets in the quarter. They led 32-22 going into halftime.

The third quarter the Jaguars struck first but senior center Harrison Oheler answered with a rebound and a layup. The game then became tight as the Jaguars began to close the Rockets lead. The Jaguars made a couple three’s and a handful of layups. The Rockets answered back with threes from Ronnie Davis, Hayden Ludenfeld, and Kordell Lewis. Oheler got into foul trouble with his 4th foul. He was pulled and Junior Patrick Hemmig entered the game. The third quarter ended with RM leading 45-43.

The 4th quarter began and the Jaguars took the lead. Both teams kept answering with big baskets. Davis hit another three, he screamed and pointed at the bench getting his team hype. The game was tied 50-50 with 4 minutes and twelve seconds left. With 12.3 seconds left Lewis is fouled makes the free throw, and  RM won the game 63-60.

The Rockets leading scorer was Lewis who had a three pointer, three from inside the paint and hit seven out of eight free throws. Samuels wasn’t far behind with twelve points and Davis with nine. Marcus Stubbs gave the rockets a headache with 26 points for the Jaguars.

Despite losing senior captain Henok Kassahun in the first quarter, the RM Varsity Boys Basketball team narrowly defeated the Gaithersburg Trojans by a score of 74-73 in the final seconds of the fourth quarter.

The game started with the Rockets winning the tip off, but then both teams would start off cold. Junior Kordell Lewis scored the first two points for the Rockets, though it was quickly matched by a Trojans bucket. After missing five of their first six shots however, the Rockets began finding their groove and went up 8-2.

The Rockets had been playing well on defense and was gaining momentum on offense when Kassahun went down with an injury that forced him to miss the rest of the game. Although that moment hurt the Rockets’ momentum, RM managed to limit the Trojans to 7 points in the first quarter, making the score 12-7 at the end of the first.

The second quarter started with a made basket by Trojans guard Mandela Torke, followed closely by baskets by both Lewis and junior Jabril Robinson, bringing the lead up to 8. The Trojans would then go on a run and take their first lead at 21-20, with baskets from Trojan forwards Jao Ituka and Jahdel Darego. The Rockets were able to gain their momentum back with a three pointer by sophomore Tre Powell and a fierce and-one by junior Hayden Lunenfeld, which ignited the crowd. The Rockets had a 10 point lead during the second quarter, but the score was 34-28 Rockets at halftime.

The fourth quarter started with some small runs, traded by both teams. However, the Trojans started chipping away and even cut the Rockets lead to 4. Lunenfeld and Lewis, who had 15 points each for the game, hit some key shots to extend the Rockets lead. The Trojans, however, continued to play hard, as Ituka and Torke made some clutch shots to cut the lead to three.

Senior Devon Liyanamana, who had been held in check for most of the night, had 4 points in the last 2 minutes. The Rockets led 73-68 with just under 30 seconds left, and it seemed as if the Rockets would escape. However, the Trojans hit two key free throws to cut the lead to three. Then, with 20 seconds left, the Rockets committed a turnover, giving the ball back to the Trojans. In the final ten seconds, Ituka made a contested three to tie the game up.

The Rockets rushed down the court, trying to run a play. Robinson drove to the basket, and was fouled with 4.2 seconds remaining on the clock. Robinson went to the line for two shots, missing the first one. Despite the miss, the Rockets still had confidence that Robinson would make the second free throw. He did just that, giving the Rockets the lead 74-73. The Trojans rushed up the court, trying to get a shot off but were denied by a solid Rockets defense. The Rockets escaped in a thriller against the Trojans, and they will now try to keep up their momentum against both Clarksburg and Northwest this week.