“Bombshell”: Shocking, but not quite explosive 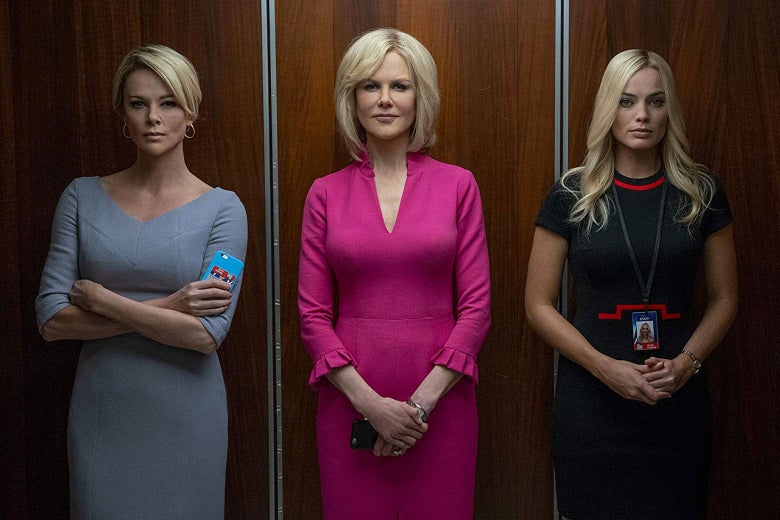 Charlize Theron, Nicole Kidman, and Margot Robbie deliver outstanding performances, but the film’s storyline does not do the characters justice.

After much anticipation, I finally sat down to watch Jay Roach’s “Bombshell,” a shocking account of ongoing sexual harassment buried within the inner levels of Fox News that helped ignite future movements such as #MeToo and Time’s Up. The plot starts in 2016, right before Donald Trump is elected president, a time in which the early stages of these movements begin to unfold and conversations about sexual harassment in the workplace become more common. My expectations for “Bombshell” were high, mainly due to the premise and award-winning cast, but the film didn’t entirely deliver. The ending was satisfying in certain ways but left me wanting more to the story in others.

In part, my hopes for the movie were piqued by the trailer alone, which plays up the scandalous nature of the plot. A tense elevator scene packed with suspenseful music and heavily mascaraed side-eye introduces the film’s three leads—star anchor Megyn Kelly (Charlize Theron), “Fox & Friends” host Gretchen Carlson (Nicole Kidman), and young news producer Kayla Pospisil (Margot Robbie)—and certainly leaves viewers intrigued by the promised drama of the film.

However, the plot of “Bombshell” involves multiple narratives that eventually become jumbled, messy and way too much to handle. A myriad of characters, ranging from Fox News employees to prominent political and journalistic figures, flit in and out, which adds to the confusion. From the start, the movie reads like a fast-paced, stylized news segment: the camera follows sharp-eyed, confident Kelly as she introduces audiences to the important figures of Fox, touring us around the building.

Right away, audiences catch a glimpse of the underlying culture permeating Fox’s newsroom: one of the male employees compliments Kelly on her dress in an overly friendly, slimy tone, but she passes it off with a cool demeanor learned from years of deflecting unprofessional advances. Degrading comments are just the beginning, though. Kelly’s role as one of the most well-known conservative broadcast journalists in the nation is constantly undermined, and she, along with the other women at Fox, face scrutiny that implicitly devalues their work. “Bombshell” constantly reminds audiences that the success of Fox women largely depends on maintaining the misogynistic beauty standards of the organization and the men who run it. Tan-legged women in tight dresses fill the halls, and words like “feminist” or “ambitious” are used as derogatory terms.

The conflict kick-starts with Carlson, a former host of one of Fox’s prime programs who was quickly demoted and fired by network head Roger Ailes (John Lithgow) after refusing his sexual advances. With unwavering strength, Carlson then sues Ailes for sexual harassment. Ailes is credited with building the Fox empire into a multi-million dollar media conglomerate, but the praise ends there, “Bombshell” assures audiences. Ailes’ years of sexually harassing and gaslighting female employees are hinted at from the beginning of the film, but it isn’t until Carlson sues Ailes that the full extent of the situation is revealed.

Soon after, over 20 women come forward, with immediate consequences: any woman who then speaks out about Ailes’ sexist comments and advances is ostracized and condemned as a traitor to the network. At one point, staff members even pass out “Team Roger” tee shirts in an attempt to solidify support for Ailes.

One of those women is Pospisil, who Robbie plays with girl-next-door likeability. Pospisil is one of the film’s most important characters, but also one of the most incomplete. Her short-lived fling with coworker Jess Carr (Kate McKinnon), a closeted gay and liberal woman, incorporates the perspectives of LGBTQ characters at a right-wing news organization. On the surface, Pospisil fits in with her coworkers—she is conservative and labels herself as an “evangelical millennial”—but is upset that Carr has to hide her identity at work. The pair’s secrecy also highlights the requisite characteristics for female journalists at Fox, primarily being expectations for women to fit a traditional mold that is not inclusive of diversity—whether it be in appearance, sexuality, or ideology—and exploited on television.

In the end, the complexity of Pospisil’s sexual orientation is left unanswered, as well as her relationship with Carr. Considering Robbie’s growing repertoire (including “The Wolf of Wall Street,” “Suicide Squad,” or “I, Tonya”) and range, Roach could have crafted a more dimensional plot for Pospisil, whose storyline concludes triumphantly, but still feels incomplete.

One scene stands out from the rest of the film. A career-focused conversation turns into a stomach-churning assault when Ailes demands Pospisil to lift up her skirt to see her legs. When Pospisil, whose naivety is shattered at this moment, pushes back, Ailes justifies his request by saying that Fox is a “visual medium.” To Ailes, Pospisil’s only value is her body, and Robbie conveys the pain of this realization expertly. This scene is one of the most brutal moments of the film, but also one of the most powerful. Pospisil’s character is fictional, but she stands for millions of women who have faced the same issues at their workplace, and she feels the most heartfelt and nuanced out of the three main characters.

I left “Bombshell” feeling like it didn’t quite live up to its potential—the nearly two-hour run time could have been longer to expand on the futures of Kelly, Carlson, and Pospisil beyond the limits of Fox, specifically expanding on the consequences of Ailes’ takedown on a more personal level for the protagonists. “Bombshell” grabs your attention and gives you an inside look at the perspectives of three women that you might not otherwise consider, but it doesn’t finish the job. Though the acting is wonderfully earnest, the film is stylistically choppy; the news-story style of filming becomes confusing and hard to follow as the plot becomes more complicated. “Bombshell” is worth watching, but audiences have to overlook the film’s convoluted organization to truly appreciate the gravity of its message.