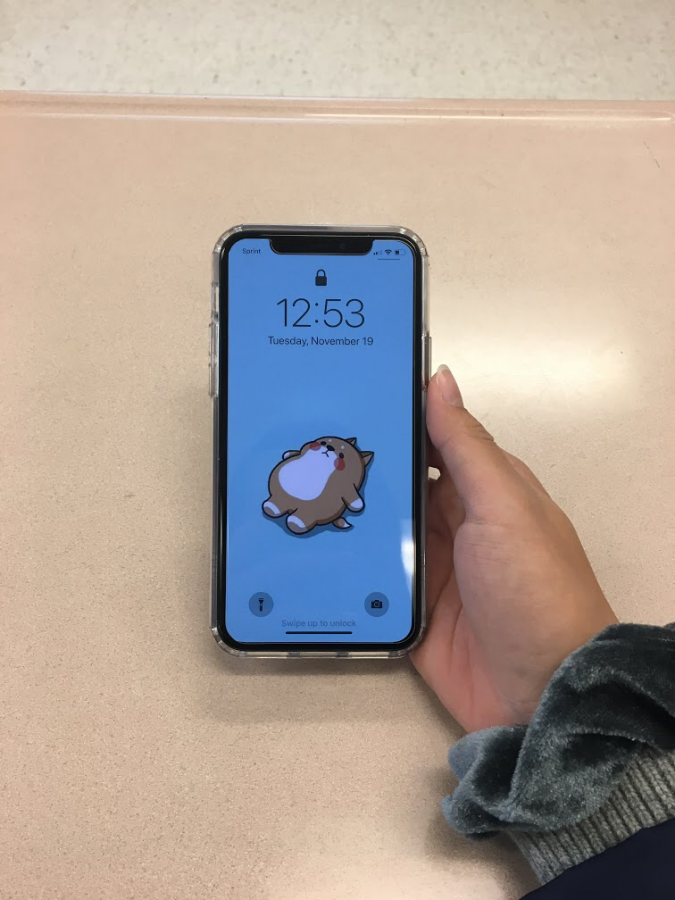 An iPhone 11 owner shows off the lockscreen of their new phone.

iPhone 11 is the better phone

From streaming Black Mirror to ordering pick-up from Panera, a smartphone is a versatile part of your life. Due to its enhanced capabilities, the new iPhone 11 provides the best experience.

The iPhone 11 has incredible specifications. Powered by the latest A13 bionic chip, the new iPhone works faster with a battery life far surpassing its rival, the Google Pixel 4. This combination naturally lends itself to smoother and longer-lasting gaming and video-streaming experiences. Students would no longer need  to worry about their phone battery dying in class.

The new iPhone has an undeniably spectacular camera quality. Referring to her iPhone 11, senior Joy Wang said, “I used to think the 2-camera design was a little strange, but I can’t really argue with the quality of the pictures.”

To take photos in the dark, the iPhone 11 boasts a new night mode. With ultra-wide lenses, next-generation Smart HDR and the new QuickTake feature, the new iPhone allows for stunning landscape photos and clearer videos. These upgrades are perfect for aspiring photographers and those who want high  resolution photos or videos for social media.

Additionally, several users have praised the new iPhone for its sleek design. “My favorite thing about it would have to be the colors,” Wang said. “I personally have the purple iPhone, which I think is gorgeous, but I also think the green and yellow colors are really unique and pretty.”

Furthermore, Apple has a convenient trade-in program to reduce the iPhone 11’s price, making it more affordable for all iPhone owners.

Having an iPhone also gives access to iMessage group chats and a plethora of   apps only available on the App Store, like Apollo, Enlight and Co-Star.

Reviews also show some problems with the new Pixel that the iPhone does not have. For example, while the new Pixel supports a unique radar sensor, reviews suggest that this feature is not particularly reliable and can even compromise your privacy. According to Forbes, there have been several security concerns over the  FaceID feature of the Pixel, which recognizes users and unlocks the phone even when the owner is sleeping and their eyes are closed.

Strangely, Google also chose to remove unlimited Google Photos backup on their new phone, which was a major selling point of their previous models. On the other hand, the iPhone 11 now supports larger storage sizes, giving avid photo-takers an option for more storage for photos and videos.

“Generally, regarding the two phones, I would have to agree that the iPhone is better, simply because of the great iOS system and the popularity of the Apple brand,” Wang said. While still imperfect, compared to the Pixel 4, the latest iPhone models offer a higher quality camera, longer battery life, and more aesthetic design  for both photo enthusiasts and casual student users alike.