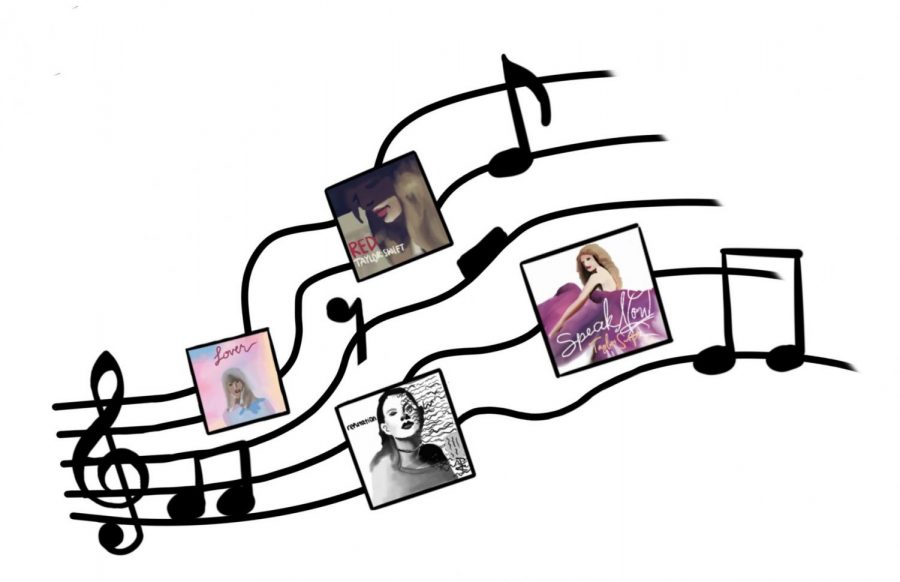 Taylor Swift has released seven albums, but only owns the master rights to one: her most recent album, “Lover.”

On Nov. 14, Taylor Swift published an open letter alleging that the former and current CEOs of Big Machine Records, Scott Borchetta and Scooter Braun respectively, have prevented her from performing her older records, asking fans and other musicians for support. Swift said that she had been planning to perform a medley of her songs from the past decade to perform at the American Music Awards on Nov. 24, where she will receive the Artist of the Decade Award.

So why are Borchetta and Braun allowed to keep Swift from performing her own music? Big Machine owns the master rights to Swift’s first six albums. Having the master rights of the actual studio and live recordings of an artist’s music allows labels to license those recordings to third parties who may want to use the songs in a TV show or movie and keep the money gained from this licensing. They are free to do this without the artist’s permission.

It used to be routine for an artist who signed a record deal with a label to forfeit their master rights. In return, the label would financially support the recording and release of the music. However, in the past decade or so, the frequency of music licensing has increased dramatically, particularly with the rise of streaming services such as Spotify and Pandora, making it more important for artists to maintain their master rights than ever before. To complicate the situation even more, if the artist’s record sales increase the original investment of the label in the production of their music, as Swift’s clearly have, the artist can receive part of the profit from licensing, but the label still maintains control.

Swift’s relationship with Big Machine over the course of her 13-year career reflects the increasing importance of master rights. Swift signed with Big Machine in 2005, when she was just 15 years old. She was one of the first to sign with the label, which Scott Borchetta had just recently founded. Swift was arguably the driving force behind the label’s success, becoming the first Big Machine artist to win a Grammy Award—four, in fact—in 2010.

Swift’s 12-year contract with Big Machine ended in 2018, after the release of her sixth album, “Reputation.” In November 2018, she signed a multi-album contract with Universal Music Group, Big Machine’s distributor. Under this contract, Swift keeps the master rights to the new recordings she makes, including those of her most recent album, “Lover,” which received the highest Metacritic score of any of her albums. “Lover” has also received high praise from fans: “This album is amazing, especially the music videos,” sophomore Erin Mullens said. “Taylor Swift’s songs are real. She always writes from the heart, and you can feel that in every beat, every chord, every note of her songs.”

She always writes from the heart, and you can feel that in every beat, every chord, every note of her songs.”

After Swift’s departure from the label, her relationship with Big Machine grew even more thorny on June 30 of 2019, when Scooter Braun acquired the masters to all of Swift’s albums with the exception of “Lover.”

On that same day, Swift published a lengthy letter on Tumblr addressing the controversy with Big Machine and Scooter Braun, calling it her “worst case scenario.” Explaining the reason why she left Big Machine in the first place, Swift said, “For years I asked, pleaded for a chance to own my own work. Instead, I was given an opportunity to sign back up to Big Machine Records and ‘earn’ one album back at a time, one for every new one I turned in.”

Unwilling to accept this offer, Swift had “made peace with the fact” that Borschetta would eventually sell the label, deciding to leave her master rights with him and sign with Universal Music Group instead. However, when Borschetta sold Swift’s masters to Braun, she was not pleased, mainly because Braun represents Kanye West, and was involved with him around the time of the “Famous” music video, which features a nude wax figure of Swift in bed with West and the lyrics, “I feel like me and Taylor might still have sex…Why? I made that [expletive] famous.”

In the post Swift says, “All I could think about was the incessant, manipulative bullying I’ve received at [Scooter’s] hand for years.”

She has really developed in her career, not only in her music style, but also in her knowledge of the business.”

Swift has yet to repossess the rights to her first six albums, but she has managed to win a small victory. On Nov. 18, Big Machine issued a statement agreeing to “grant all licenses of their artists’ performances to stream post-show and for rebroadcast on mutually approved platforms.” At the very least, this will allow Swift to perform her medley at the AMAs.

Swift’s transparency regarding her struggles in the music business has helped raise awareness  and mobilize fans to call for change in the industry. This outspokenness and transparency is characteristic of Swift in recent years, but her journey to this point has been a long one. “I think that she has really developed in her career, not only in her music style, but also in her knowledge of the business,” freshman Maya Ramamurthi said. “She has been notorious for getting into trouble and involved in drama, but I think that in general, she has learned to handle increasingly well as she grows as an artist.”

Correction: This article originally ran in the November 2019 print issue and incorrectly named Anishka Basheerbad as the writer.