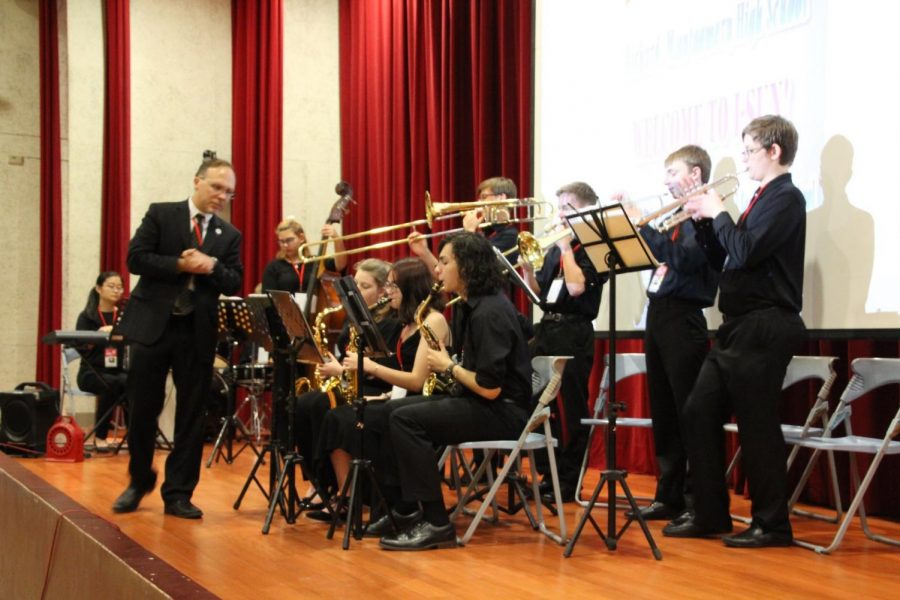 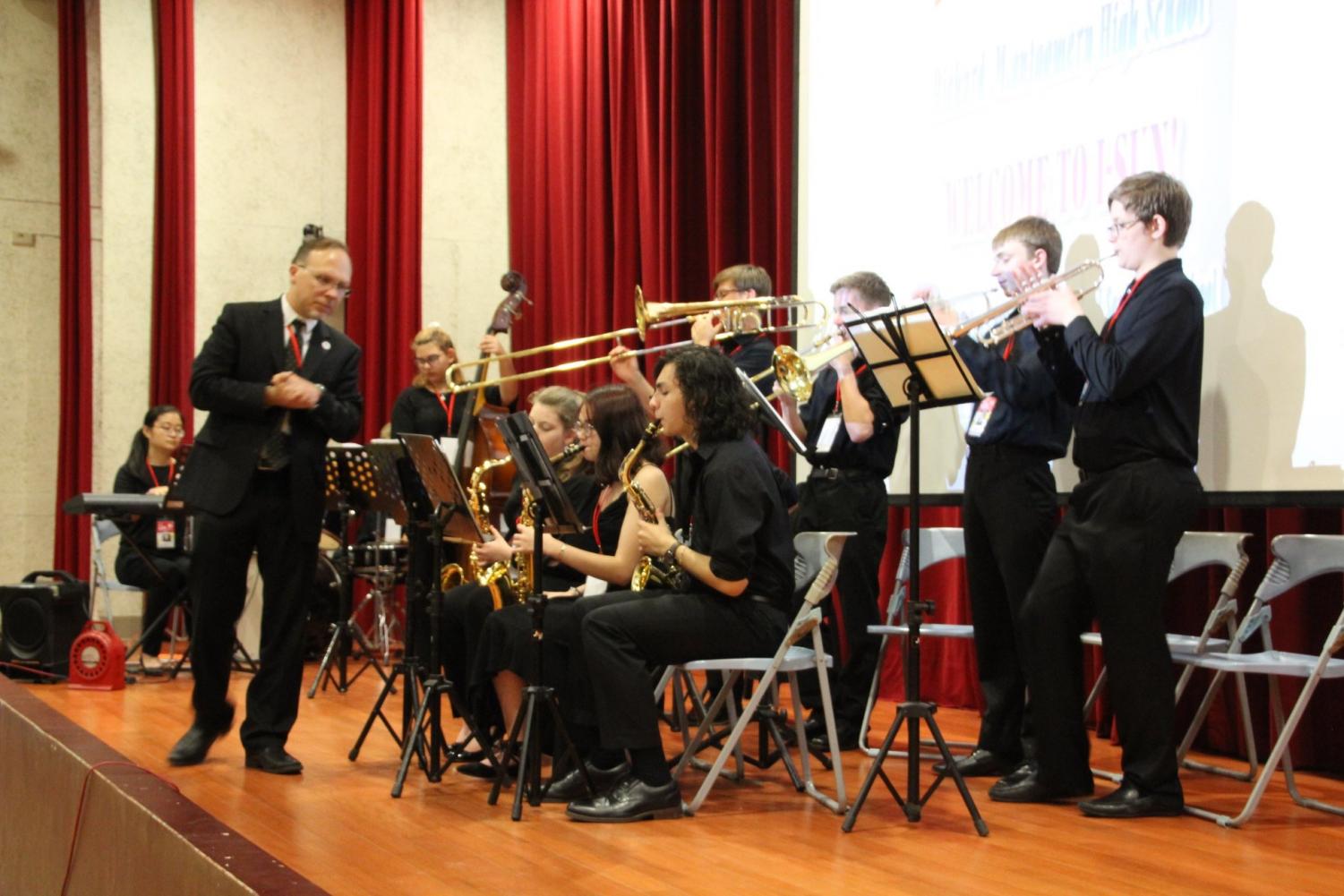 Between Oct. 12 and 21, members of RM’s Jazz Ensemble visited Yilan, Taiwan to perform in the Yilan International Art Festival. While visiting, they also played outreach performances in schools, parks and traditional Taiwanese markets.

“As part of the sister city relationship Rockville has with Yilan, a delegation from the festival came last May to hear the Jazz Ensemble. Two weeks later, we were invited to participate in a festival where everything except for the flights was covered,” Instrumental Music Director Peter Perry said. “It was an unbelievable opportunity and I was equally astounded and proud that we were the only international high school group invited.”

There was extensive preparation prior to the trip, from both staff and students. “Financing, accommodations, travel arrangements are all by themselves extensive. Add all the logistics and permission of taking students—that is a whole new dimension,” Dr. Perry said. “Therefore, the details of planning, and putting on an international trip with students are quite extensive and usually take about a year to comfortably put together—we did it in two months.”

Over the summer, members of the group performed at the official Rockville-Yilan Sister City Signing Ceremony. In the month and a half leading up to their departure, they worked on a handful of jazz tunes in class as well as four arrangements specifically for the trip: a Taiwanese folk song, a piece they would be playing with Taiwanese students and two pieces that they would be playing with all performers in the festival.

The festival incorporated much more than performances, though. Each day featured many activities, from press conferences to ceremonies. “We performed in the festival with representatives from 12 countries: Taiwan, Russia, the United States, Poland, Spain, Mexico, Japan, Indonesia, the Philippines, Hong Kong, Mongolia, Thailand,” junior and trombonist Corbin Christopher said.

Along with listening to the other groups’ music and learning about their culture, the student groups got to speak with each other multiple times. During one of the lunches, the festival organizers seated different countries together. During their free time, a few students practiced their Spanish with the Mexicans and Spaniards. 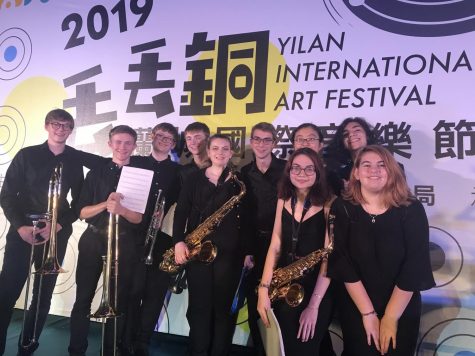 Christine Zhu
Members of the RM Jazz Ensemble head to Taiwan to participate in the Yilan International Art Festival.

“We performed in outreach performances for the local junior and senior high schools of Yilan, where we got to interact with the students,” senior and trumpeter Ivan Postovit said. At one school, the American and Taiwanese students played a piece together. At a few others, RM Jazz played their tunes for the Taiwanese students, and separate groups from the Taiwanese school, one for traditional Taiwanese instruments and one for western, performed as well. After one performance, an English teacher from the school even brought the Jazz Ensemble into her classroom for a Q&A session with her students where the two groups learned about each other’s lifestyles.

The musicians also got to experience other aspects of Taiwanese culture. “We visited a Taiwanese opera museum, a candied fruit museum, a few temples, and a crayon factory,” senior and bassist Melissa Langert said.

Despite the language barrier, RM Jazz was able to connect with the other performers—both local and foreign—through music. “It was important to me to see that we could take music students from this side of the world, fly them across the globe, sit them down with music students from the other side of the world, and, with very little effort, communicate and perform music together—a truly universal language,” Dr. Perry said.

The Mongolian group featured Tuvan throat singing, a type of singing in which the performer sings multiple pitches simultaneously. The group from Mexico included electronic music in their pieces. The festival exposed a group of American teenagers to music and instruments from all over the world. “It was gratifying to hear the music of all these different cultures,” Christopher said.

At the end of the closing ceremony, all of the performers at the festival performed two pieces collectively; one was a medley appropriately titled “Travel Around the World,” arranged by the festival organizers, with traditional music from each country. “For me, the most rewarding part was playing with the aforementioned multitude of groups,” freshman and trombonist Sean Borsum said.

Not only did RM Jazz get to hear music from other cultures, they got to share their music with fellow musicians and, in the case of the park and traditional market performances, passersby as well. “The people were so excited to see us and sincerely interested in what we were performing and what we were doing there. There was an almost celebrity status with the teenagers over there,” Dr. Perry said.

The people were so excited to see us and sincerely interested in what we were performing.”

By the closing ceremony, the group had an established fanbase of Taiwanese natives. These Taiwanese fans would ask for photos, autographs and Instagram handles after each performance—each member of RM Jazz has gotten a handful of direct messages (DMs), and Postovit gained roughly 400 followers.

Although the students were sad to leave behind their celebrity status, those who are not graduating seniors are looking forward to going back next year for the 2020 Yilan International Art Festival.