On stage, Postolache shoots for the moon 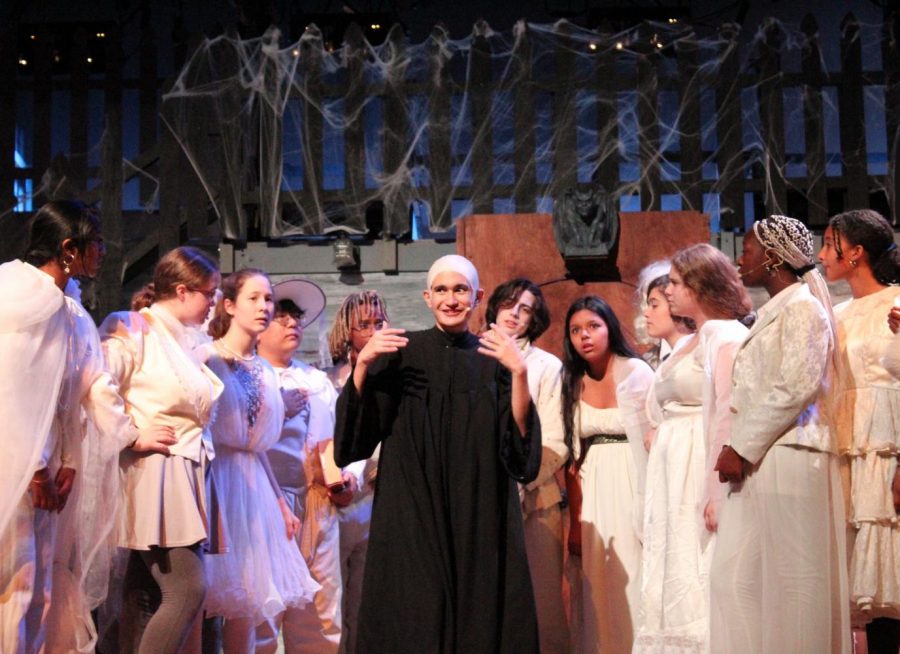 Senior Tudor Postolache lights up the stage in the fall musical as the eccentric matchmaker Uncle Fester.

Decked out in a bald cap and flowing robe, senior Tudor Postolache is one of the stars of this year’s fall musical, “The Addams Family.” His role as Uncle Fester is the final singing role of his high school career.

Over the years, Postolache has been an integral member of the Black Maskers, RM’s drama club. “I started out as an actor, but I found my way into a couple of crews, such as props and sound,” Postolache said. He also wrote and directed a show for the annual independent student-run production, One Acts, last year.

Outside of RM, Postolache is heavily involved in the world of drama. This past summer, he played a main role in Wildwood Summer Theatre’s production of “The 25th Annual Putnam County Spelling Bee.” He also attended the Chesapeake Shakespeare’s Theatre Company teen summer camp, and took on a job with them last spring.

Postolache has always been interested in the arts. “I have to credit my father, my family and particularly my eldest sister, who kind of nurtured me into a love for performing,” he said. In fourth grade, he joined his school’s drama program, and has been a member of school drama ever since elementary school.

Even with his extensive experience in theater, the RM drama program continues to have a special place in his heart. “My favorite part about drama, particularly the Black Maskers, is definitely the community of students who come together to make these productions,” he said. His love for drama makes it difficult to pick just one favorite memory. “From the cast parties, going to Silver Diner after a production, the show night highs, and just in general, rehearsing on a midweek afternoon, it’s an amazing experience,” he said.

In fact, Postolache credits the Black Maskers with helping him fully realize his love of acting. “In the past, while I may have been unsure, now I find nothing that gives me more joy than to create stories,” he said. He is currently applying to performing arts schools, hoping to continue with this passion in college.

Despite all the time he dedicates to drama, Postolache still finds time to participate in other activities. He is the publicity editor of “Fine Lines,” RM’s annual student art magazine. He also volunteers on and off with various organizations, and plans to join the Tri-M Music Honor Society this year.

Postolache highly encourages interested students at RM to consider joining the drama program. “Never will you find a more accepting community of people,” he said.

Though drama is a huge time commitment, Postolache finds acting incredibly rewarding. “As soon as drama starts or any sort of acting begins, I come alive,” he said. “The involvement and the experience is worth it.”

As his final high school musical comes to a close, Postolache is looking forward to the student-directed One Acts and the spring play. “I wouldn’t miss it for the world,” he said.