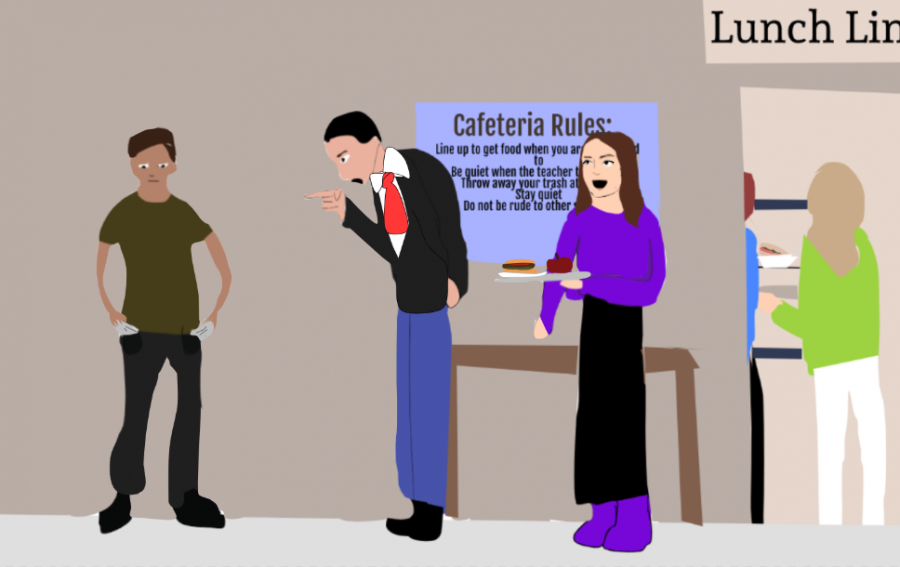 Peers mock a student that cannot afford the school lunch.

Throwing away trays of untouched food, distributing cold cheese sandwiches, branding childrens’ arms, firing workers, threatening loss of custody to parents: ‘Lunch shaming’ is the overt identification and stigmatization of students who owe lunch money. It has raised controversy in recent months, sparking anger in parents and employees around America.

USA Today reported that a Pennsylvania school threatened parents that they would put their children in foster care if they continued to be unable to provide lunch money, stating in letters sent home that they could “be sent to dependency court for neglecting [their] child’s right to food.”

In addition, a school in Birmingham, Alabama stamped “I need lunch money” on a third grader’s arm despite having a positive balance of $1.38. “When you start stamping a message on a child’s body instead of calling… it’s not okay,” his father stated to AL News.

Lunch shaming has never happened in RM, but students were shocked to hear it was happening around the country. “I just think that’s disrespectful. Like, that’s rude, for no reason,” junior Alexis Crawley said.

Some students even have a disadvantaged future because of lunch shaming. According to The New Food Economy, Kyrie Jones, a middle schooler in Granite City, Illinois, unknowingly accumulated debt due to a misprocessed free lunch form. This went on his academic record and prevented him from participating in extracurricular activities. Now in high school, he is unable to attend school events like homecoming and prom.

Della Curry, a cafeteria worker in a school in Denver, Colorado, was fired for giving free food to hungry students who did not qualify for the federal free lunch program. She told CNN that she simply could not watch hungry, crying children go unfed.“I’ll own that I broke the law,” Curry said. “The law needs to be changed.”

There has been new legislation enacted in response to this. According to USA Today, California passed a bill that requires all students to be provided with a meal reimbursable by the state, even if in debt.

Showing concern at the national level, Congress  passed the Anti-Lunch Shaming Act of 2019. It “prohibits the stigmatization of a child who is unable to pay for meals.” Moreover, it bans school food authorities (SFAs) from “permit[ting] public identification or stigmatization of the child, such as by requiring a wristband or hand stamp.”

Students expressed concerns over the repercussions of lunch shaming, should it spread to RM. “I feel like that’s a really bad thing because… some kids here, they don’t eat enough at home, so it’s probably their biggest meal sometimes,” freshman Glennis Sanchez-Ogando said.

Members of administration agreed with students over the harmful consequences of lunch shaming. “I think that’s totally unfair, I think that’s a horrible practice. I mean, that’s like stamping somebody’s hand and saying, “I’m dumb, you’re dumb,” guidance counselor Austin-Drake James said. “I think that’s just singling them out for no reason. I think that that’s something that should be done in private… between a student and a staff member.”

MCPS has been providing free and reduced-price meals for students depending on household size and income, as well as for those assisted by the Food Supplement Program (FSP) or Temporary Cash Assistance (TCA), and homeless, runaway, or migrant children.

“I think it’s completely unacceptable to publicly shame a student for needing support,” RM assistant principal Ms. Wheeler stated. “I know that Montgomery County does not engage in that kind of behavior… I would absolutely never want that kind of a policy to be implemented.”

For students who are struggling to afford educational provisions like lunch, exams, and field trips, members of administration stated that all students are welcome to talk to counseling about it. “There’s things in place in the public school to help students who need waivers for graduations, or waivers for exams, or waivers for free and reduced lunch. That’s what the public education system is for, everybody has access to education… there’s a way, you just have to talk to the right adult,” Mr. James said.