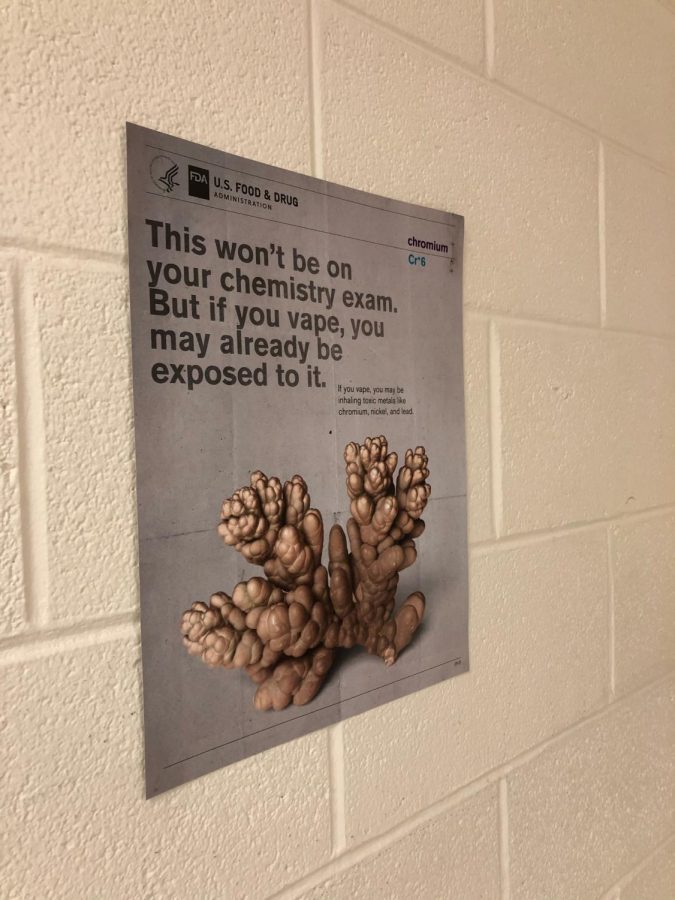 A poster in the band hallway warning students on the harms of vaping.

On Sept. 16, 2019, the Montgomery County Council proposed a bill that would ban all vape shops within a half-mile radius of all MCPS middle and high schools. Introduced by Councilmembers Gabe Albornoz and Craig Rice, the objective of Bill 29-19 is to “reduce access to e-cigarette products for County youth.”

According Fox 5 News, a second proposed bill would prohibit e-cigarette manufacturers from distributing their products to retail stores, such as 7-Eleven and CVS, within a half-mile radius of all MCPS middle and high schools.

In Montgomery County, 24 known vape shops are located within the location restrictions. Under the suggested legislation, 19 of those shops would have 24 months to either close or relocate. Since August, according to an article by WCVB, a sharp increase in vaping-related lung diseases in teenagers has garnered national attention, prompting changes in opinions at the local level.

“I do agree that closing the vape shops close to middle and high schools will help the issue,” freshman Katie Moorer said. “And I do agree that vaping is a national health crisis right now; it’s arguably worse than smoking cigarettes.”

On the contrary, some students believe that this bill is unnecessary. “I know a lot of people at our school vape and stuff, and I feel like they’ll definitely be upset,” senior Jordan Williams said. “Once you’re an adult you can make those decisions for yourself, and it’s legal for them to do that, but I don’t agree with it myself, and I feel like we can’t control what other adults do to a certain extent.”

Many e-cigarette store owners also disagree with this action, believing that it does not accomplish the goal of deterring vaping among teens. According to an article in Bethesda Magazine, Brianna Norris, owner of Victory Vapors, said, “I think it’s ridiculous. Moving vape shops out of range of schools isn’t going to stop the children from going to vape shops.”

People are aware that vaping is present in high school settings, even our own. “I do know that it happens, because I’ve seen people with it in their pockets, and off school grounds, I’ve seen it happening,” Williams said.

Staff believe that students can easily vape on school property and go unnoticed. “It can look like a little USB port,” school nurse Julie Olson said.

Moorer explained that vaping affects older members of her family as well. “They’ve been doing it for years and it’s not good for them, they’re always sick, and you can see the effect of the vaping on their bodies,” she said.

Vaping has become a national health concern, according to CNBC. Although it is marketed as safer than cigarettes, U.S. health officials are now warning the public that vaping is at the center of 530 reported lung diseases.

Walmart in particular has decided to take action against the increasing reports, discontinuing the sale of electronic nicotine delivery products at all Walmart and Sam’s Club U.S. locations, according to CNBC.

The CDC shows that the nicotine in vape products impedes adolescents’ brain development. Vape products also contain carcinogens, heavy metals like tin, nickel, and lead, volatile organic compounds and ultrafine particles that enter the bloodstream through the lungs. These elements can introduce both short term and long term health defects.

“One pod is equivalent to a pack of cigarettes or more,” Mrs. Olson said. “I think it can lead to long term use of nicotine.”

Bethesda Magazine reported that in the previous school year, five MCPS students became unconscious after vaping in school, a number which has increased from previous years’ reports.

“As a parent, and as an adult, and as the nurse,” Mrs. Olson said, “I just feel it’s very dangerous.”