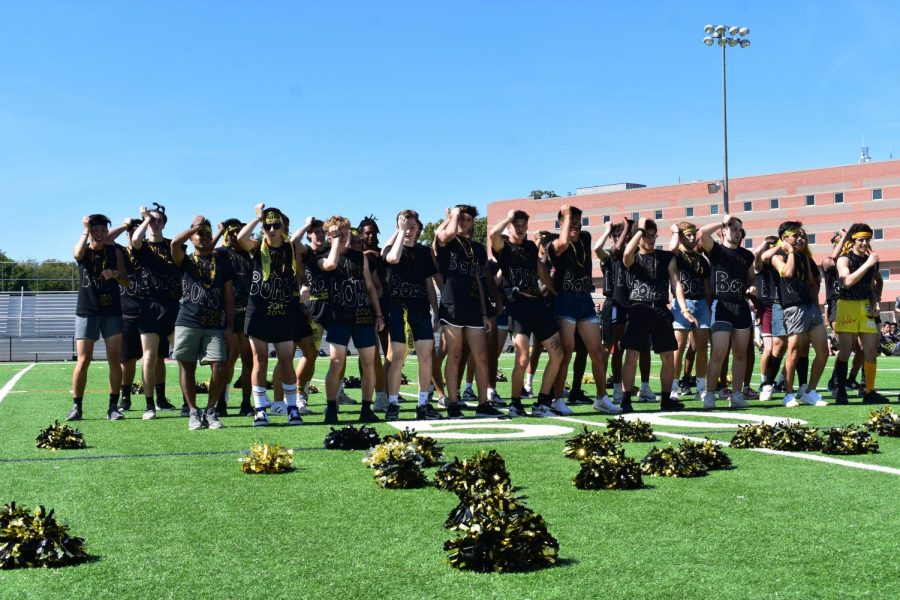 The Boms team entertains with a sequence of humorous online dance trends during their fall pep rally performance.

The annual Boms performance is a staple at the fall pep rally. Each year, a group of senior boys gather and practice a dance routine that is choreographed by the Poms team captains.

Each member of the Boms team is able to choose their own Boms nickname, which are usually female names chosen by the Poms team, though the captains are assigned names of the Poms captains.

Boms is often seen as a fun experience and a space where the senior boys can bond. “It was fun being with your boys doing something usually you wouldn’t do,” senior Justin Dixon said. “It was a fun experience.” Asides from being able to hang out with friends, Boms is also seen as a senior tradition unique to the boys. Senior Garett Suhr said, “I felt like it was my duty as a senior male to hold the tradition and do Boms. My time to shine!”

Although Boms is usually seen as more of a comedic performance, the effort given by the members is no joke. The team practiced everyday for three weeks except Fridays; however, that was still a short amount of time to prepare and learn a whole choreographed dance routine. “There was not a lot of time to get a routine down,” senior and captain Kevin Hrozenick said,

Apart from their intensive practices, all the members of the Boms team also work hard to make sure their performance is polished by the pep rally. “I felt the guys put in a lot of effort into it, and I liked how we showed up at game day,” Suhr said.

Aside from the obvious differences between Boms and most other sports, the captaining duties also differ. Hrozenick said, “Being captain really means you are holding your team accountable and making sure they’re paying attention and listening to the Poms captains. They really are the teachers and the most important part of the team.”

Though the boys ultimately shone on performance day, things behind the scenes weren’t as smooth. Like most sports teams, they went through a series of issues. “It was really hot, so a lot of [the guys] were sweating a lot, so the rest of the day they were not really feeling it and felt smelly and gross.” Hrozenick said. This lead to some turmoil and tension between the Boms and poms captains. “We ended up reaching an understanding and the guys brought extra shirts or a change of clothes so they could go on the rest of the day,” Hrozenick said.

With their compromise, the boys were able to fight through the heat and make it to the finish line. “The major highlight was the day of the performance we as a team came together and really made the poms girls proud,” senior captain Kolby Hendricks said, “We had a blast showing off what we managed to learn in only a few weeks.”

As the seniors prepare to say their farewell to high school, Boms will remain a unique experience for the senior boys to bond one final time. Hendricks said, “Of course I feel closer to the boys after we all came together as a team.”