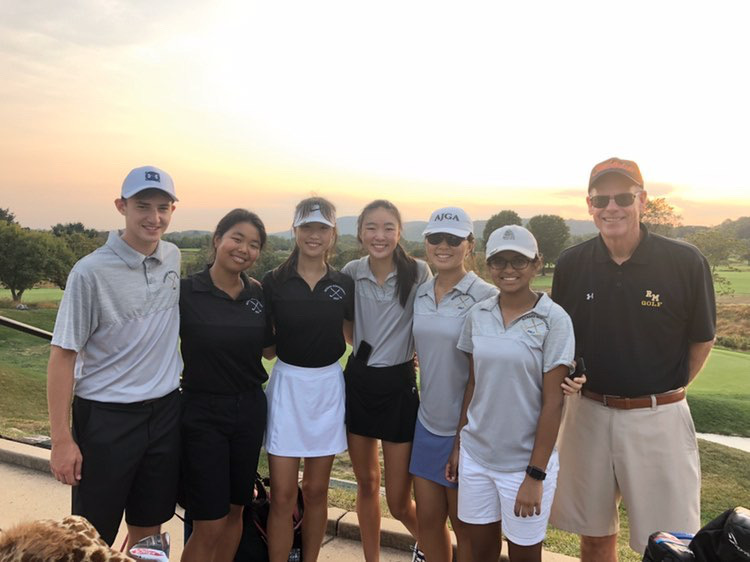 Generally, when people think of High School sports, football comes to the forefront, with the cheerleaders, poms and marching band. Or perhaps, basketball, with the loud buzzers, mascots, and constant energy. But a team often overlooked is our very own RM Golf Team, whose best moments come with skill, patience, and a genuine passion for the game from golfers and their coaches.

Golf is an unusual game in the sense that the objective is to score less points than their opponents. Unlike football, basketball, or other team sports, where teammates rely on each other for a common goal, much of the victory in golf comes from the individual achievement of each golfer.

In a typical high school golf season, six matches are held, followed by a district qualifier for the state tournament.  At each match, six players from each team are present and the four best scores go towards the team score to determine the winner of the match.

With the sense of victory in mind, the Rockets take the course during each competition, having their eyes on their on acquiring their first Maryland State Championship. After a solid 2018 season, in which they competed in their division championship and qualified for the YACHMETZ conference, the Rockets are on track with this goal.

However, this new competition holds a big threat. With teams such as 14 time state champions Churchill HS leading the way, the Rockets must face this challenge with a winning record, before the upcoming playoffs.

Coach Mike Kellinger has been very impressed with the overall growth of the team. “We improved tremendously over the last couple of years in overall talent. Last season was the best team in RM history,” Coach Kellinger said.

Winning 5 matches so far and being competitive has made this season the most successful so far.”

The Rockets are also currently competing in the top division of the county, the second time in the history of the team. “Winning 5 matches so far and being competitive has made this season the most successful so far,” Coach Kellinger said. Coach Kellinger also attributes a lot to the talent to all of his golfers.  However, he offers special high praise for six standout Rockets: Kaylen Pak, Hayden Lunenfeld, Emma Chen, Upaasna Yadav, Taylor Chao, and Alyssa Cong, who all personally finished in the top 10 at state championships during the past three years.  Chen also finished in the top five in the state as a freshmen.

The golf team, as a whole, has hopes of a dominant season. “The team has the same expectations as last year, making states again,” junior captain Hayden Lunenfeld said.

However, each golfer also has their own personal strengths and goals. “Personally I think my best strength is my focus because even if one hole doesn’t come my way I try to stay focused and pick it up on the next hole,” Lunenfeld said.

Just this past week, the Rockets got second place overall at Districts with an impressive showcase. Next up, an all girls team will be moving forward into the States championship.

So while the RM Golf team is lesser known than most team sports, their undeniable passion and talent will no doubt lead to more recognition, as they aim for the States title.