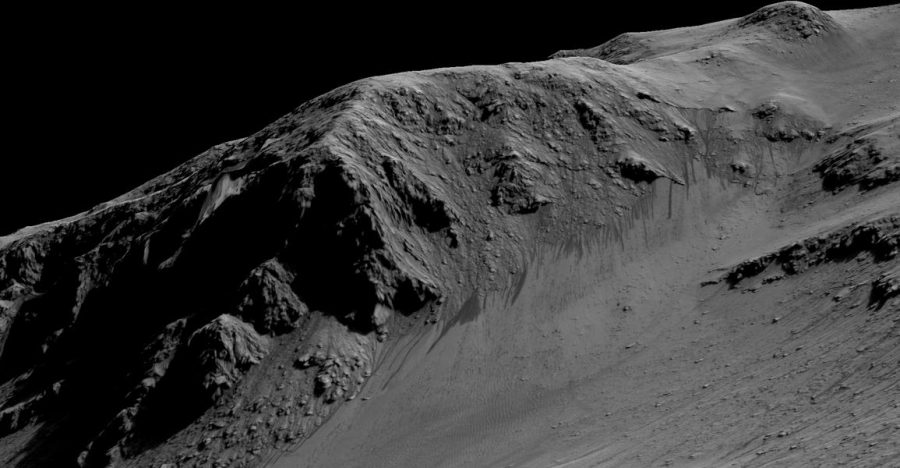 The Space Debate: more than a half-century old and still sparking controversy.  The space organization NASA, which was started in 1958, made an announcement this Monday holding that liquid has been found on Mars.  This stunning announcement comes after years of science-fiction movies and speculations about whether humanity was meant to “come to an end” on earth.

The revelation came after a NASA orbiter took photos of the surface of Mars.  Scientists believe that the streaks present in the photos presented by the orbiter may suggest that there is flowing water under the surface of the planet.

Unfortunately, samples cannot be taken by the current rover on Mars, Curiosity. This is because in addition to the steep hills surrounding the water source, the UN Outer Space Treaty of 1967 states that space exploration can only be conducted if it avoids contamination from earth life.  If a rover built on earth touches water on Mars, it could possible transfer bacteria into the water since NASA has proved before that microorganisms can survive the journey by hitching onto a spacecraft.  The costs of creating a rover without any earth-like bacteria on it are sky-rocket high, and it is not ever a 100% guarantee.

These are the words of RMHS senior Mac Morgan, in reference to whether or not the government should provide NASA with more funding in order to undertake further studies of Mars and space in general.

However, living in the era of immense American debt to China and other foreign nations, not to mention the ever-so-slowly rising inflation of the dollar and the high prices of college education along with basic human needs, is it ethical to give money to truly “foreign” and far-fetched expeditions?

“I understand that this is a big discovery, but right now, what NASA needs to do is study.  It is for a reason that the government has cut spending on space exploration.  In a couple years, after NASA truly studies the evidence they’ve found on Mars, maybe then we can send people up there,” said junior Nicole Soto.

Soto also expressed her dismay with high taxes, and even though she does not pay them, she recognizes that her parents and many adults do, and that giving more funding to NASA would most likely increase taxes levied on her family and America.

But it’s not just about the money.  If we look at past space explorations, most notably the Apollo 11 mission to land man on the moon, what fruits do they hold?

Sure, we have a humongous amount of evidence about the universe around us, but how much of that came from landing on the moon?  The moon’s texture, surface, and gravity can be studied without human expeditions there.  Although the mission did gain us an insurmountable amount of pride and good space footage, was it really worth the then $25.4 billion dollars (now $150 B) spent?

The answer to these questions are just as effectively debated by the experts as they are by students and citizens in general, because we live in a reality where money is scarce, and resources few.  Taking care of the planet we have now seems much more of a measurable and realistic plan then going off to search for a new one.