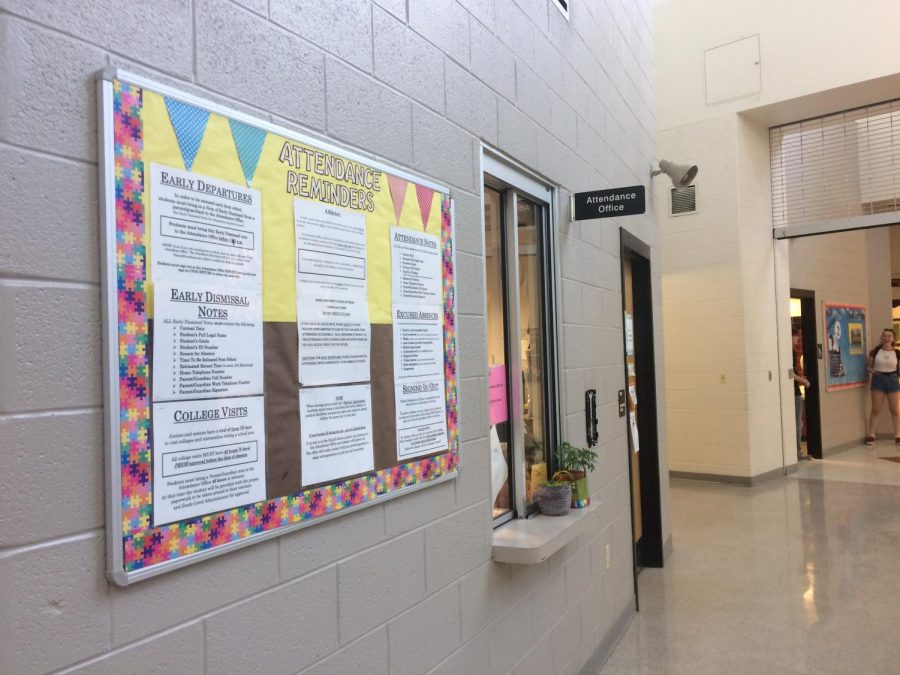 RM attendance policies can be found on the board outside of the attendance office.

Although high-achieving students and a flagship IB program have bolstered RM’s reputation across the state, RM fell short of a five star ranking in a school report card debuted by the Maryland Department of Education last year.

In December, The Tide published an article as a wake-up call for RM students on the high rate of absenteeism. Five months later, as students enter the fourth quarter, no new school-wide procedures have been implemented.

In a February faculty meeting, RM staff were asked to suggest ways in which the Instructional Leadership Team could support instruction. The survey question explicitly excluded student attendance: absenteeism was described to be beyond the staff team’s control.

Some students can fake an absence and they would be left off the hook.”

Following the meeting, social studies teacher Mr. Donlon wrote an open letter to the Instructional Leadership Team (ILT) arguing that student attendance be made an agenda priority. He listed four actions the ILT should consider: a frank dialogue with parents, a similar conversation with students, strong adherence to MCPS Board of Education mandated attendance policy, and the placement of phones in classrooms to streamline communication with parents.

The official Board of Education protocol for attendance (JEA-RA), last revised in February of 2018, must be implemented across MCPS. It includes the following provision: “Students with three unlawful absences in a class will be warned of the possibility of failure and referred to their school counselor and administrator…. Students with five unlawful absences in a class will automatically be notified to submit an appeal of the recording of their absences if they or their parents/guardians believe any absence was recorded incorrectly, or develop an attendance intervention plan with their school counselors/administrators.” Failure to adhere to the attendance intervention plan may put students at risk of receiving a failing grade.

Several students and faculty noted the irregularity at which MCPS policy is implemented at RM. One interviewed RM senior said that while the attendance system has given her the flexibility to pursue time-intensive extracurriculars, she notes how easily excuses can be fudged and trusting teachers cheated.

“Some students can fake an absence and they would be left off the hook,” freshman Amanda Platon said.

“I think part of the reason we have plenty of students who are chronically absent is because we have inconsistent enforcement of the absence policy across not only MCPS, but especially at RM. Students and their families are not held accountable when they have multiple absences,” math teacher Ms. Gaffney said.

Mr. Donlon wrote, “Failure to take significant action to address an issue of this importance, is an abdication of responsibility and communicates a message of low expectations of students.” In conversations with colleagues, he commented upon the implicit pressure faced by teachers to keep students’ grades up in order to maintain high eligibility and graduation rates. In his open letter, Mr. Donlon said, “This haphazard smoke and mirrors approach to education may place a bandaid on a growing chronic attendance problem, but authentic learning and true concept attainment are sacrificed.”

Student truancy is scarcely an isolated issue. Neighboring DCPS came under fire early January of 2018 after reports surfaced of schools allowing chronically absent students to graduate. Teachers are caught between heeding protocol to fail truant students and attempting to cushion the repercussions failed classes may have on students’ futures.

I think part of the reason we have plenty of students who are chronically absent is because we have inconsistent enforcement of the absence policy across not only MCPS, but especially at RM.”

While continuing to observe countywide protocol, Walter Johnson High School principal Ms. Jennifer Baker has introduced “seat time” to discourage students from skipping class. If absences persist after an attendance intervention plan is implemented by counselors, students must physically make up the time they miss before or after school or during lunch.

By reinforcing in students the importance of coming to school, Ms. Baker believes that unexcused student absences have been decreasing. At WJ, administrators and counselors are put on notice when a student is chronically absent and make a concerted effort to phone a parent or guardian.

For Ms. Baker, while county and statewide standards hold schools accountable, administrators ought to have the flexibility to achieve those expectations. “School communities know what works for them,” she said.

English teacher Mrs. Leckie acknowledged the importance of schoolwide regulations, but said, “I don’t know the extent to which some of the outside factors can be addressed just by the school. I think it’s more of a sociological issue than it is just related to the school itself.”

Teachers—even unengaging ones—should not be held accountable for absenteeism, Ms. Gaffney said. She continued, “I have literally done all the things they told me I should do, and I still had attendance issues. So what then? It can’t be the teacher. If students knew they would fail all their classes if they didn’t show up, I suspect we would have a much much much better attendance policy.”

As attendance data from this school year is gathered for the upcoming 2018-2019 report card, it remains to be seen if RM students have trended towards greater tardies and absences. When, ultimately, does the finger pointing end? If poor attendance is endemic to intangible cultural or socioeconomic factors, data would suggest that even a restructured school-wide attendance policy approach would not lower absenteeism. However, with the administration still unresponsive to the issue, Main Street may indeed become a little emptier.