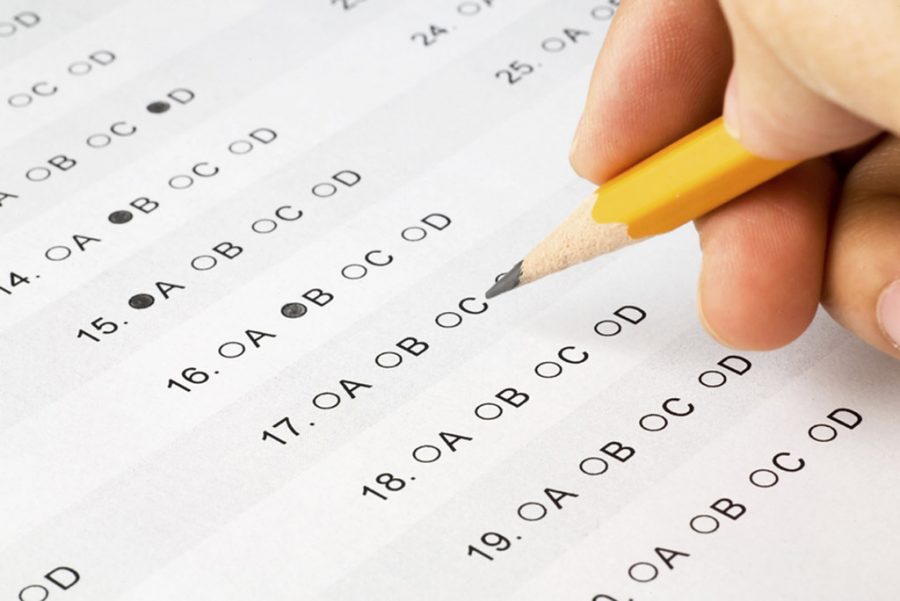 MCPS policies have aimed to reduce the amount of class time dedicated to testing.

Three years ago, the Board of Education’s decision to eliminate final exams meant MCPS students could finally say goodbye to a week of late-night studying, block schedules and scantron bubbling. However, the change has also left many students unprepared for other exam settings and the rigor of studying and testing. While final exams no longer have a separate impact on a student’s GPA, standardized testing itself is still prevalent across the country. With the issues of grade inflation and college-readiness pervading Montgomery County, final exams may be an inadvertent culprit.

Before 2016, MCPS students who took high school courses either in middle or high school were required to take semester exams. The exams were two-hours long and worth a fourth of the semester grade, thus weighing heavily on student GPAs. During testing weeks, high schools followed final exam “half day” schedules, and middle schools would adhere to modified block schedules.

It causes huge disruptions in schedules because certain courses had to offer final exams.”

The Board of Education voted to replace semester exams with “quarterly measures” in an effort to decrease the testing burden on students and give teachers back two weeks of instructional time, according to a statement on the MCPS website. The new policy would also pose less of a disruption to the daily schedule of students, teachers and parents, especially on the middle school level.

“It was the middle school teachers that really advocated for eliminating the final exams. It really disrupted the school schedule,” ESOL Resource teacher Jackie DeLucia, who previously worked with middle schoolers, said. “At high school when you have the final exams, you can just say, ‘you only need to come to school if you have a final exam on these days.’ You can’t do that to middle schoolers who are only 10 or 11 or 12 years old.”

“They couldn’t just send them home,” she continued. “So it causes huge disruptions in schedules because certain courses had to offer final exams. So I know that that’s not always the story that everybody knows, but I think that’s important that you understand why there are some other teachers in the county that wanted to get rid of the final exams.”

However, many feel that the larger issue at hand is the long-term academic consequences of having no in-school exams. For high school students especially, the “testing burden” has not diminished significantly. At RM, the pressure of SAT, AP and IB testing is an enduring presence every year. MCPS also implements state and country-wide mandated tests such as PARCC, which will be replaced with the Maryland Comprehensive Assessment Program (MCAP) by Fall 2019.

Consequently, many students feel that having final exams might be helpful for review and for experience. Senior Blane Tim, who took final exams during her freshman year before the policy change was made, feels that the exams helped her retain what she learned better. “I feel like final exams were better than the current system because it takes what we’ve learned from the first quarter and second quarter and tests us on that,” Tim explained.

Similarly, junior Eujin Lee said, “The pace at which we go through units changes so rapidly that we don’t really get the time to review unless we set aside time on our own. And a lot of times, students have extracurriculars or other obligations that don’t let them review as much as they might need to if finals were a thing.”

Despite student opinion, MCPS PARCC scores have not worsened since 2016. English Language Arts (ELA) scores improved the most in the last two years, with Level 1 performances dropping from 20.3 percent to 12.4 percent and Level 5 performances increasing from 17.7 to over 25 percent. High school Algebra 1 scores rose slightly, increasing from 0.5 to 0.8 percent.

AP scores from RM students have also remained about the same since the policy change. In 2015, 58 percent of testers earned a 4 or a 5, and 57 percent earned those scores two years ago.

I know they thought they might be giving students a break by eliminating the exams, but it actually does a disservice to them.”

On a similar note, MCPS also has not eliminated its built-in assessments completely. The 2015 Board decision called for courses that previously had districtwide exams to give quarterly assessments that account for 10 percent of a student’s semester grade. For instance, ESOL students take quarterly progress checks.

Some teachers have adapted to the Board’s decision by giving students internal cumulative exams regardless. For instance, many math classes at RM end each semester with a “Festival of Knowledge,” a summative test on all of the instruction from the past two quarters.

Other teachers who have not made such accommodations still see a detrimental side to the lack of such cumulative testing. “I know they thought they might be giving students a break by eliminating the exams, but it actually does a disservice to them. I think there’s some value in trying to prepare for a large cumulative exam because you’re going to be asked that in college,” science teacher Michael Willard said.

The lack of college preparedness is a common stance amongst those who are worried over the elimination of final exams, and many students have echoed this sentiment. “I think finals here prepares us for the finals in college, so if we don’t have finals exams in high school and in college we do have final exams, we’re not used to that testing,” Tim said.

Students who currently attend a college program also agree that testing experience in high school is essential. “In my opinion it’s important for kids to take exams in high school. If I hadn’t been in IB, my first exam would have been in my program, like a lot of my classmates did, and they didn’t do well,” junior Celia Henein, who attends the Early College program at Montgomery College, said.