Virginia Cavaliers comes out on top in March Madness tournament 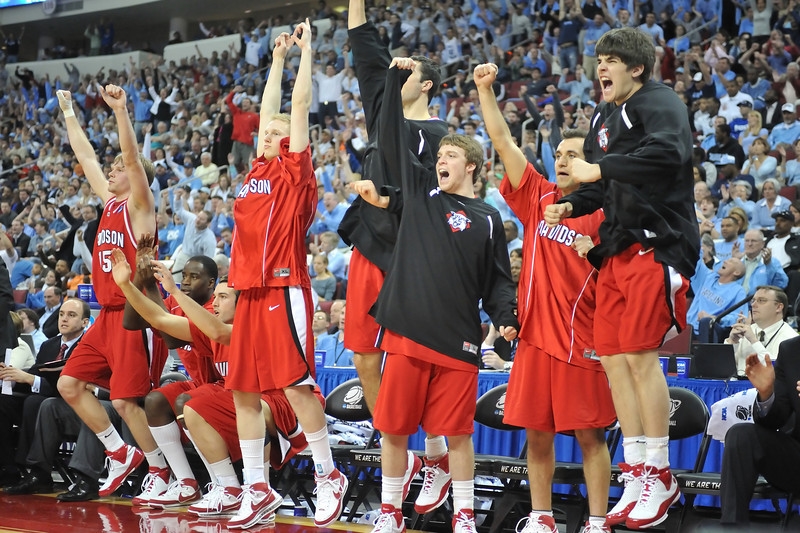 The NCAA March Madness Tournament excites millions across the nation as they root for their favorite team to take home the coveted trophy.

Every year at the beginning March, millions of Americans hurry online to various sports websites for one common purpose: March Madness. The month long event is an annual college basketball tournament to determine the national champion for the season. The tournament sparks millions to head online to make their brackets in attempt to predict how the tournament will go, all in the name of both friendly competition and bragging rights.

“On one hand, I wanted to be realistic. I know someone who had Oregon winning it all, which I knew was completely absurd; I tried to stick to teams that had a shot at doing well,” freshman Sagar Castleman said. Many people chose their brackets based on research and popular picks. “I picked mainly based on guts and some stats and what ESPN was saying,” sophomore Abhinav Karthikeyan said .

This year’s tournament had a heavy favorite for the title; over 60% of ESPN brackets had the Duke Blue Devils winning it all. Led by likely NBA lottery picks Zion Williamson and RJ Barrett, Duke was in the spotlight all season long, ultimately cruising their way to the #1 seed with a clear shot at the national championship. Additionally, nearly half of the country had picked Duke to face their biggest rival, the North Carolina Tar Heels, in the National Championship.

Round 1 of the tournament saw many close games and heartbreaking finishes, as well as major blowouts by the top-contenders. Big name schools such as Duke, Kentucky, Kansas, and Gonzaga easily made their way to the next round, winning by more than 20 points. Louisiana State University Tigers (LSU) survived a late game surge from the Yale Bulldogs, and the Maryland Terrapins were able to prevent the 11th seeded Belmont Bruins from pulling an upset. The Michigan State Spartans, no stranger to being upset in March Madness, survived a scare from the 15th seeded Bradley Braves. The 12th seeded Liberty Flames were able to pick up their first tournament win in school history, upsetting the Mississippi State Bulldogs.

History almost repeated itself when the first seeded Virginia Cavaliers was faced with a  major deficit early in the game, down 36-30 at halftime to a 16th seeded team. However, they were able to outscore the Gardner Webb-Runnin Bulldogs 41-20 in the second half, securing a 15 point victory.

The highlights of the round goes to Murray State Racers and the Auburn Tigers. The Racers, led by surefire top three pick Ja Morant, were able to blow by the Marquette Golden Eagles by nearly 20 points. Morant finished with the only triple double of the entire tournament. The tournament also saw for the first time that a ninth-seeded team did not make it to the second round, with all four eight-seeds failing to advance.

The second round of the tournament saw many blowouts, with all Cinderella teams of the tournament (Liberty, Murray State, Iowa, Ohio State)  getting knocked out. Eleven of the sixteen games of the second round ended with victories by more than 10 points, with 6 games decided by 20 or more points. Exiting this round and entering the Sweet 16, the 12th seeded Oregon Ducks were the only high-seeded team that remained in the tournament, knocking out the 13th seeded UC Irvine-Anteaters in the process, 73-54.

That’s not to say the round lacked last second thrillers. LSU vs Maryland game ended with LSU Sophomore Tremont Waters driving by for a game winning layup and secured LSU’s spot in the Sweet 16 with a 69-67 win.  The highlight of the round was the matchup of Duke vs the University of Central Florida (UCF). 7 foot 6 center Tacko Fall of UCF left his heart on the court; however, Zion Williamson of Duke pulled through with a highly criticized “and-1” play, giving Duke a slight lead with seconds left in the game. UCF in the waning seconds of the game had good looks, but failed to score, ending in a 77-76 loss. “I thought UCF was about to make history, but Duke slid by in classic Duke style,” Castleman said.

The Sweet 16 made up for what the second round lacked with multiple close games and the fall of one of four number one seeded teams. The Auburn Tigers hit 17 three pointers and shot 55% from the field, overpowering the North Carolina Tar Heels and derailing brackets across the nation. This continued the Tigers’ remarkable run in the tournament and established themselves as a legitimate contender. Duke once again survived on the other teams faults as the Virginia Tech Hokies failed to hit a game winning three, ending the game 75-73.

The most notable game of the round, and perhaps the entire tournament, was the matchup between the Purdue Boilermakers and the Tennessee Volunteers. Despite an 18 point lead in the second half, the Boilermakers allowed the Volunteers to take a 2 point lead in the final seconds of the game. A last second foul by Tennessee gave Purdue a chance to win the game; ultimately, the game was tied at 82 going into overtime, in which Purdue was able to win 99-94.

This tournaments’ Elite Eight saw one of the most competitive rounds in recent history; no game was decided by more than 6 points, and at the end of the round, only one number one seed was left standing. That team was not the favorited Duke Blue Devils, as they fell victim to the sheer physicality to the Michigan State Spartans, pummeling over 60% of brackets in the nation.

The Final Four saw not only the first Final Four appearance for Texas Tech, but also the best game in the tournament, with Auburn taking on Virginia. The game was competitive, but as the seconds dwindled down, for Auburn, victory was on the horizon as Virginia missed a critical three pointer. However, in a twist of fate for the Cavaliers, Auburn conceded a foul with seconds left in the game, and Virginia took the game in dramatic fashion. “When Guy missed that three and collapsed in tears because he was sure he had lost Virginia the game, but then he actually ended up winning it for them with his three foul shots, amazing. Just amazing,” Castleman said.

Finally, in the National Championship game, the Virginia Cavaliers and the Texas Tech Red Raiders put on a show in the final game of the collegiate season. The thrilling game went all the way to overtime, with Virginia’s DeAndre Hunter hitting  a clutch game tying three pointer with 12 seconds left in regulation. In overtime, Virginia was able to complete the ultimate turnaround, having infamously been the first number one seed in history to lose in the first round to a 16th seeded team just the year prior, and outscored the Red Raiders 17-9 in overtime to capture the championship.

The 2019 March Madness was as exciting as it gets. Despite the lack of underdogs, the intensity and excitement of the games deeper into the tournament was anything but lacking. Virginia was able to provide a feel-good story for millions of Americans throughout the nation, showing how even after the greatest disappointments, with hard-work and dedication, you can find you way back to the top.