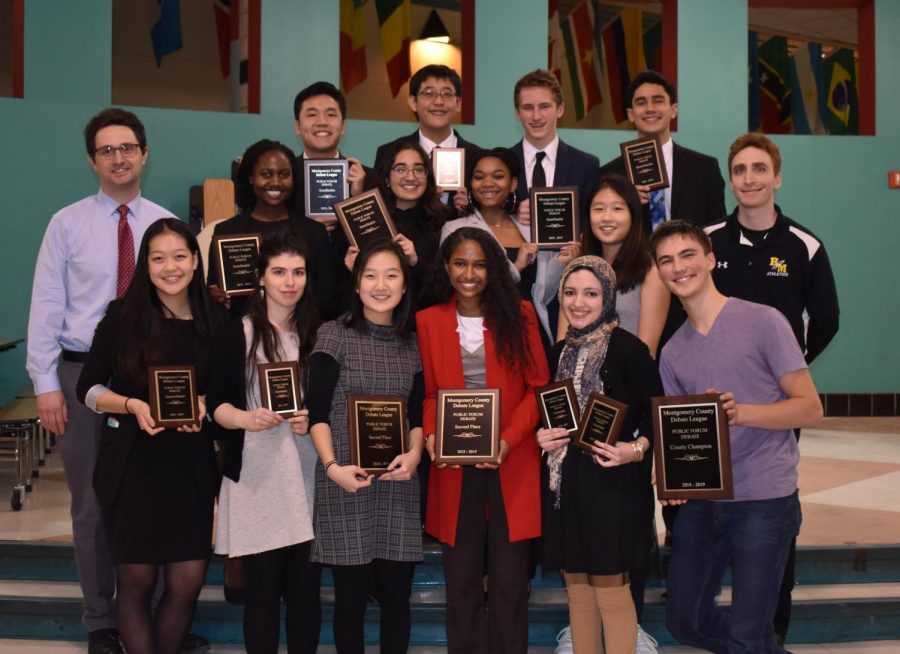 RM debate retains the county champion title after winning the most number of rounds overall.

On Feb. 13, 14 of RM’s 18 total partnerships that had gone 6-4 for the season debated three back-to-back rounds in a competitive and long night. Their resolution: the United States should stop selling arms to Saudi Arabia. RM’s teams were among 50 other teams in the county from various schools, and RM had the most number of wins overall. .

The teams had begun preparing for the debate a month beforehand, attending Wednesday lunch meetings, Friday after school meetings and mock debates to ensure that they were ready for what other teams threw their way. The debate season had started months before, as the teams would go to Blair in order to debate two rounds every month for five months. The accumulation of each team’s total wins and loses from these five nights determines if they qualify for the February playoffs.

This year, the coaches, social studies teachers Noah Grosfeld-Katz and Todd Stillman, aimed to get nine teams to the second day of playoffs, when the championships occurred. This would ensure that the final round was between two RM teams. On Wednesday Feb. 13, seven partnerships advanced to the final round alongside five BCC teams, one Blair team, two JDS teams, and one Blake team.

At the start of the second day of playoffs, 16 teams remained. Since over half of the total teams on the second day were from RM, it was inevitable that at some point two RM teams would go up against each other. This happened in the first round, when juniors Camber Vincent and Jessica Holloway debated sophomore Jerry Shen and senior Siobhan Light.

After the first round, five of the seven RM teams advanced, including Vincent and Holloway, juniors Emily Chen and Shevani Tewari, juniors Dina Garmroudi and Jolly Rop, juniors Danny Espejo and Nam Lam and two of the senior captains Fatma Elsayed and Chloe Noh.

During quarter finals, Vincent and Holloway faced the Blake team, while Garmroudi and Rop debated Chen and Tewari and Espejo and Lam debated Elaysed and Noh. Vincent and Holloway advanced to semifinals to debate the last standing BCC team, and Garmroudi and Rop advanced to debate Elaysed and Noh. Because one of the two rounds in semifinals was another RM v. RM matchup, RM was ensured a team in the final round. The rest of the team, showing tremendous support, stayed to watch these rounds in addition to the coaches.

After another 40-minute debate round, the BCC team and the RM captains advanced to the final round. This round took place in the cafeteria, and most of the teams that had come to compete, including RM parents and other parent judges, stayed to watch.

These teams debated on the stage in front of five experienced judges, and after many speeches and rounds of crossfire, the BCC team won the round in a close vote of 3-2. However, many of those who watched felt that Elaysed and Noh performed very well regardless.  “Well I think anyone who saw the final round and knows a thing or two about debate would say that RM definitely won that round. Fatma and Chloe did everything they were supposed to do,” Rop said.

Nonetheless, RM still received the county champion plaque, having gotten the most teams to the second day of playoffs and the most wins overall.

After two long nights and many hours of preparation, the teams went home with this year’s season behind them. Next school year, during the month of September, many of these RM debate team members will repeat this cycle, and see where the season takes them.