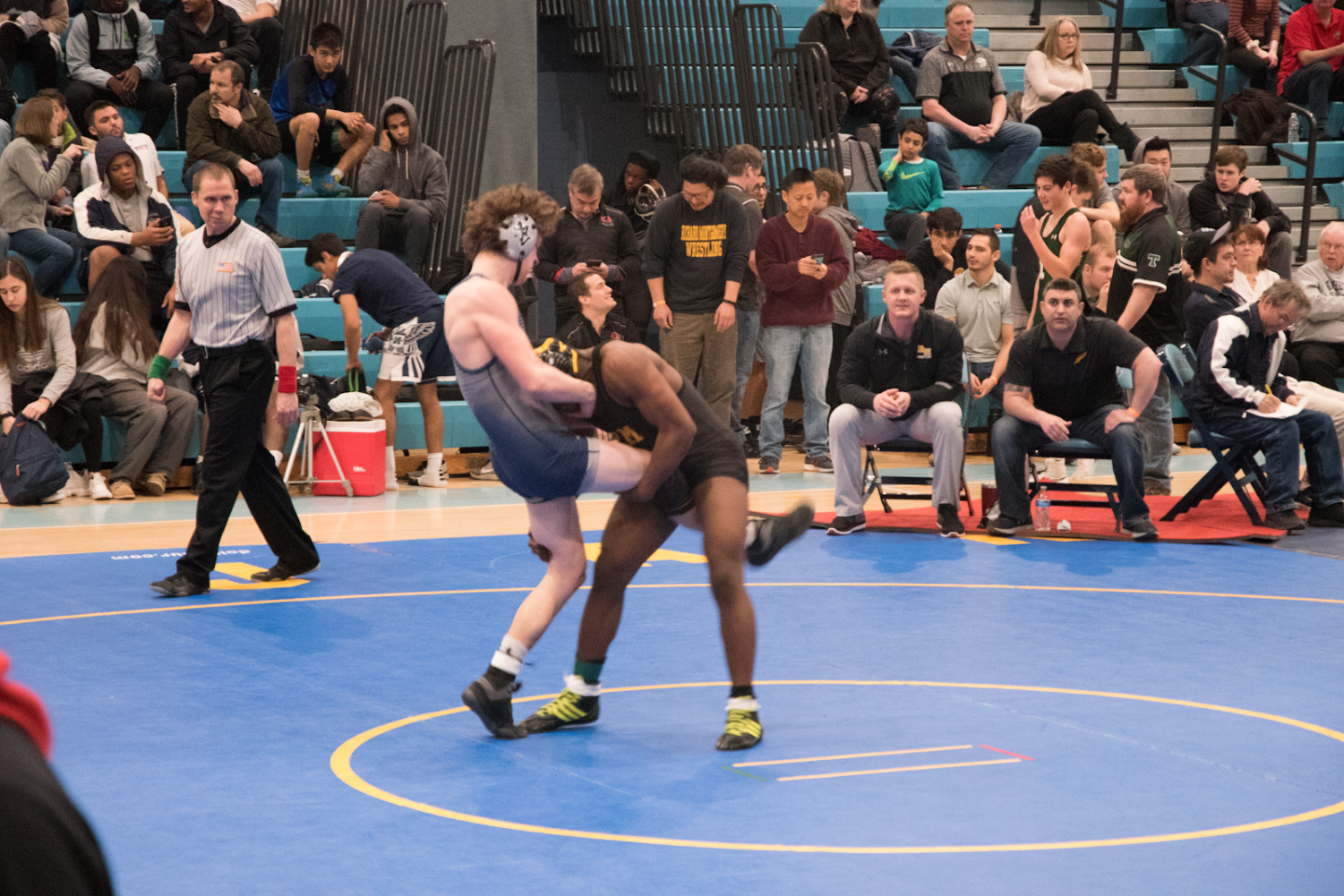 Nicholas McCarthy faces off against Tom Chenoweth of Manchester Valley High School during his second match of the 4A-3A West Regional Championships. (Photo by Lauren Zhou)

Nicholas McCarthy faces off against Tom Chenoweth of Manchester Valley High School during his second match of the 4A-3A West Regional Championships.

Friday, Chang wrestled a close match against her opponent, Ben Carlow from Westminster High School. Taking the lead by first period, Chang prevented any chance for a comeback with a pin on Carlow 1:44 into the second period, resulting in a decisive victory. McCarthy had an even more overwhelming victory, pinning his opponent down in the first period at 1:51. Both Chang and McCarthy advanced to semifinals.

Saturday held tougher matches for both Chang and McCarthy. Chang fought a close match with Johnny Pisano from Clarksburg High School. After a single point scored by Pisano, the two were deadlocked in a stalemate for the rest of the game. Despite almost scoring an escape point in the last period, Chang was unable to break free from Pisano. Ultimately, the match ended with a victory to Pisano, 1-0.

Next, McCarthy faced off against Tom Chenoweth from Manchester Valley High School. Throughout the game, McCarthy consistently racked up take-down points, scoring two points for every one of Chenoweth’s. McCarthy’s steady lead was maintained throughout the match, which resulted in his overwhelming victory, 12-7.

Afterwards, Chang wrestled Griffin Gonzalez from John F. Kennedy High School to compete for a spot at the State Championship. By the end of the first period, Chang and Gonzalez were stuck in stalemate at 0-0, both unable to score points on each other. The first point of the match was scored when Gonzalez scored a takedown on Chang in the second period. Despite escape points scored by Chang, Gonzalez maintained his lead throughout the second period. By the end of the period, the score remained at a close 3-2 in favor of Gonzalez. However, he started to pull ahead in the third period, scoring another take down. Although Chang scored two points from another reversal, she lost the match 7-4.

McCarthy will enter states having won first in his weight class. In his third match, he defeated his opponent, Jeo Martinez from Bethesda Chevy-Chase High School, by a narrow margin of 3-2. Chang defeated Carlow once again by a solid margin of 4-1, placing fifth in her weight class.

The Wrestling State Championships will take place at the Show Place Arena in Upper Marlboro on Friday, March 1 and Saturday, March 2.