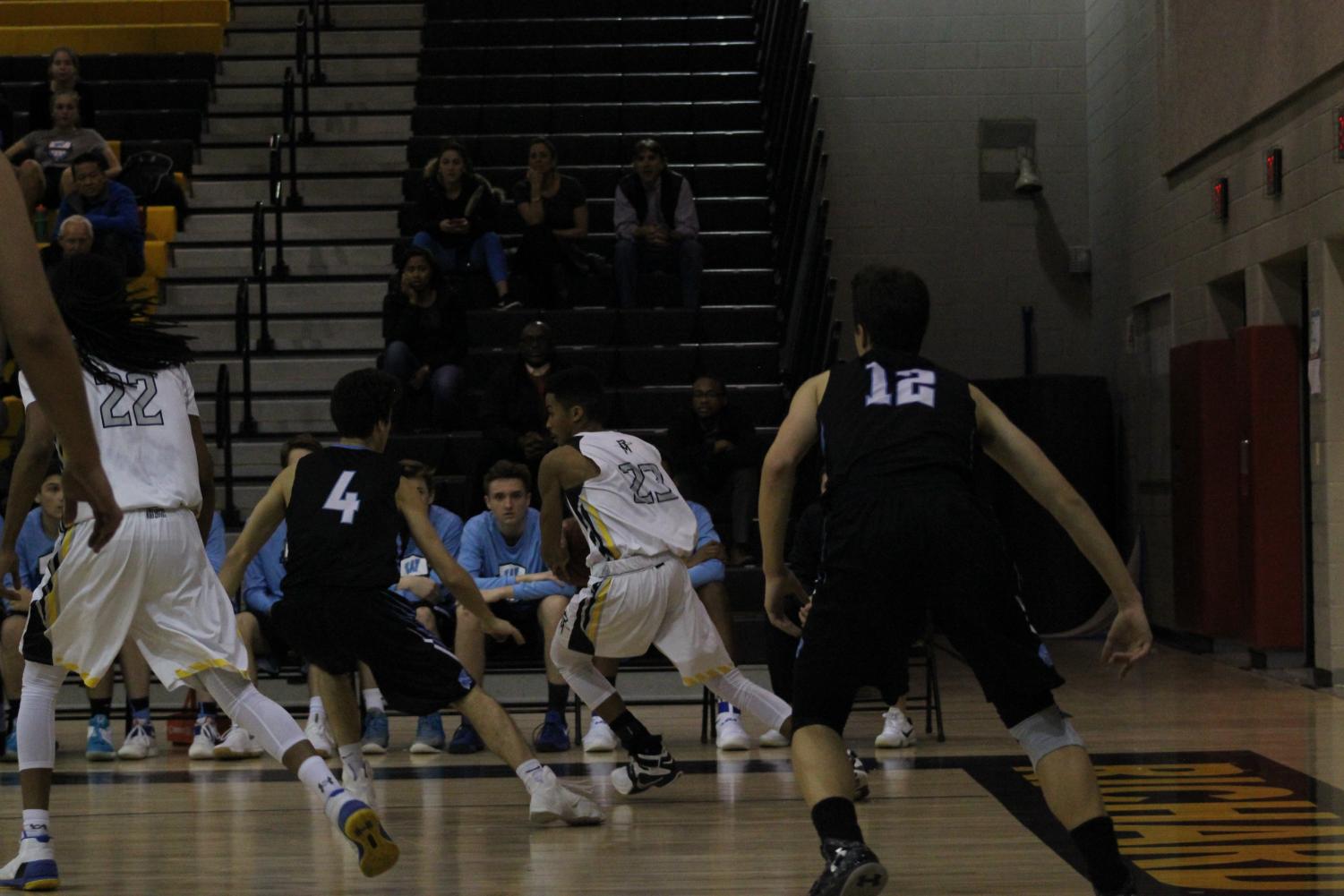 RM boys basketball remains undefeated after their game against Gaithersburg.

The Richard Montgomery boys basketball team improved their record to 7-0 on Friday, Jan. 4, edging out the Gaithersburg Trojans in the game’s final minutes. The Rockets, coming into the game with a 6-0 record, faced a tough challenge against the undefeated Trojans.

The game began with Gaithersburg gaining possession of the ball through the opening tip-off. After missed shots from both teams, Trojan sophomore guard Jordan Hawkins scored the game’s first two points. However, the Trojan’s lead was short-lived, as Rockets senior forward Miles Gally tied the game with a two-pointer. With five minutes left in the first quarter, the Trojans, led by their two sophomore guards, Hawkins and Jao Ituka, had a 11-4 lead.

In the last five minutes of the first quarter, despite two fouls given to sophomore starting guard Kordell Lewis, the Rockets made key rebounds and steals. The defense stood their ground, only allowing Gaithersburg to score four points in three minutes. At the end of the first quarter, the Trojans led 17-14.

The crowd erupted once Rockets junior guard Henok Kassahan tied the game at 25 points. In the next two minutes, the Rockets played stellar defense and launched a 9-2 run. The run began when Gally scored an and-one from a missed shot. Afterwards, two steals turned into threes by Cornish and senior guard Brian Sadeghi put the Rockets in the lead 36-27. The Trojans countered with their own 6-0 run to close out the half. At halftime, the Rockets was leading by 36-33.  Cornish led the Rockets in scoring 15 points and Hawkins led the Trojans in scoring 17 points.

The third quarter brought everyone to their feet when Gally hit an and-one on the Rockets’ first possession. That was one of the few highlights for the Rockets, however, as the Trojans were more aggressive this quarter on both sides of the court. The Trojans made many steals and scored key threes, putting them in the lead at 54-49 by the end of the third quarter.

Heading into the fourth quarter, the Rockets needed a comeback in order to win the game. However, the situation looked dire for the Rockets in the beginning of the last quarter where the Trojans made the first two shots with ease.

However, a 21-7 run to end the game propelled the Rockets to a close win. Lewis started the run by scoring a three-pointer followed by a defensive stop turning into a layup by Gally. After two free throws made by Cornish, the Trojans scored a three-pointer. With 4:30 minutes left on the clock, the Trojans led by seven points. Nevertheless, two steals made by the Rockets that turned into offensive plays by Gally and Orcev tied the game at 63.

After a Gaithersburg turnover, Gally threw a long court pass to Cornish, who made the go-ahead layup to put the Rockets ahead by two. With less than one minute left in the game, Ituka fouled out, leaving the Trojans without one of their key players. The game ended with the Rockets winning 70-65.

Although the Rockets rallied and won the game, they still have many areas to improve upon heading into the rest of the season. Coach Breslaw said, “The team got really lucky and we need to improve a lot moving forward, considering that we play this team again this season.”

In their next game, the Rockets will face off against Northwest High School on Monday, Jan. 7.