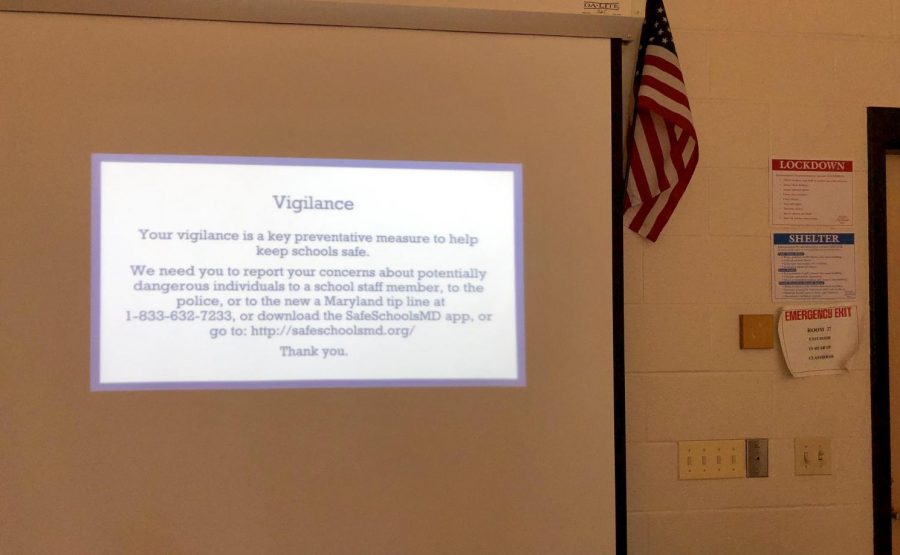 Students viewed presentations on how to react to different active assailant scenarios.

On Tuesday, Dec. 18, RM had its first active assailant drill, one of MCPS’ newest steps towards enforcing more school safety policies after the increased number of school shootings in 2018. The new drill, titled ‘lockdown with options,’ took place during an extended sixth period, and Tuesday’s schedule was modified to allow time for the in-class presentation. During the drill, teachers presented various scenarios to the class and asked students how they would respond if an active shooter was to enter the building.

“I think it’s better then just having to stay in the classroom,” freshman Camila Sotomayor said. The presentation emphasized the importance of situational awareness and three key components to responding to an active assailant: avoid, deny, and defend. Prior to the drill, multiple emails were sent out to parents in the RM community, and students were alerted on school announcements as well.

RM principal Damon Monteleone, along with other members of the school community, agreed that the number of school shootings, particularly in 2018, has increased tremendously. “Whether we like it or not, this is the world we live in now,” Monteleone said. After previous mass shootings such as Columbine and Sandy Hook, and more recently, Parkland, Fla., and Santa Fe, Tex., schools have increased security measures dramatically.

“The current model of shelter of a lockdown alone doesn’t work,” Monteleone said. “When you have a singular approach to any safety threat based on an active assailant, it’s not going to work.” RM’s new lockdown with options drill encouraged students to take action during an attack by an active assailant instead of sitting complacently. The presentation included many ways to secure classrooms, such as pushing furniture in front of a door to barricade it from a shooter.

If we are conditioning people to just hide and cower and not exit, or not have common sense and put a bunch of furniture in front of a door, we’re not keeping students as safe as we should be.”

Many RM students thought the drill was effective and helpful. “I thought that it gave a lot of good insights to what you could actually do, because a lot of people would panic in that situation,” junior Maddy Klansek said. “You have to take necessary precautions now in this time and day with everything that’s happening.”

The drill is part of Maryland’s new Safe To Learn Act, which was passed in early 2018. The act enforces components such as more mental health services and an increase in safety drills in schools.

When announcing the active assailant drill, RM staff made sure to inform students and parents that the counseling office would be open for students to talk through any anxiety or negative feelings about the drill. “It didn’t cause me any anxiety, but I can see how it might cause other people anxiety,” Klansek said.

“We as a school system want to make sure that teachers have the ability and the authority to make a decision in a time of crisis that will actually save their students’ lives,” Monteleone said. “If we are conditioning people to just hide and cower and not exit, or not have common sense and put a bunch of furniture in front of a door, we’re not keeping students as safe as we should be.”