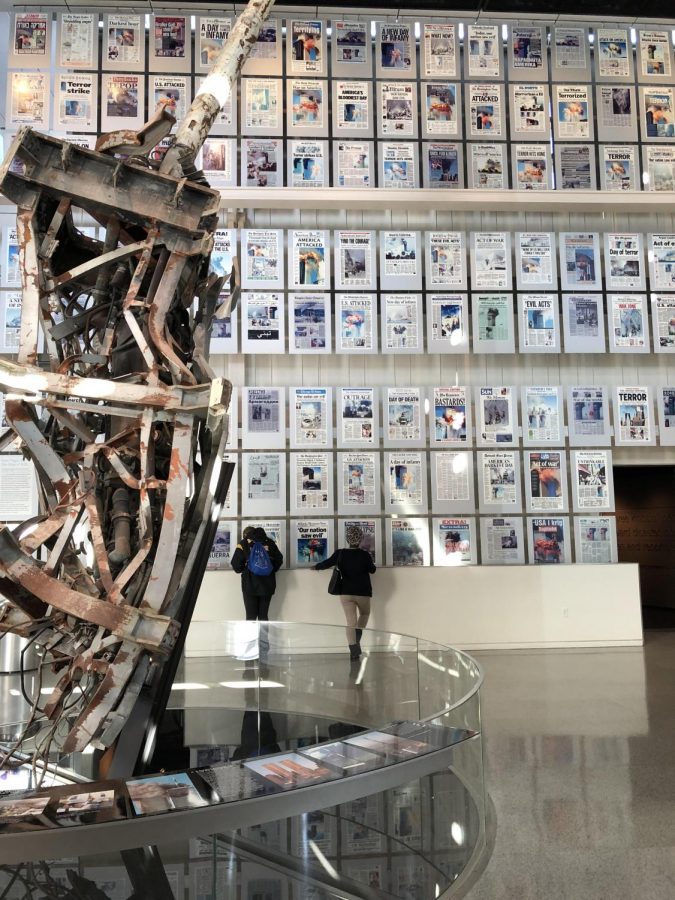 On Wednesday, Nov. 28, RM’s journalism students took a field trip to D.C. to visit the Newseum and hear a presentation on media ethics. The class, which included staff writers and editors from the Tide, spent the day learning about the in-depth history of news, including media, broadcasting, the First Amendment and more.

The class took the metro to D.C. in the morning and arrived at the Newseum with a few hours to spare to visit exhibits and eat lunch prior to the medic ethics seminar at 12:15, which lasted around 50 minutes. After taking the metro back to Rockville, students returned to RM before 2:30.

The Newseum consists of six floors full of various exhibits and an engaging, vibrant atmosphere. “In a lot of museums, you’re walking around and looking at things, but the Newseum is very interactive and very cool,” junior Brooke Hilliard said.

The Newseum includes exhibits such as the Front Pages Gallery, the First Amendment Gallery, the Journalists Memorial, and an Interactive Newsroom, to name a few. The museum also features galleries covering major world events such as 9/11, the Berlin Wall, the Marines and Tet Offensive, and the Civil Rights movement. “I learned more about events like 9/11 and I was exposed to lots of history, so it was pretty cool,” senior Jalen Stubbs said.

Another component of the museum that students found especially striking was the Pictures of the Year and Pulitzer Prize Photographs galleries, which are both comprehensive collections of award-winning photos from the past century. “The Pictures of the Year exhibit of the last 75 years of really amazing photos really stuck with me just because, typically, photos are a little bit more powerful than words for me,” junior Emily Chen said. “Seeing all these great images, not only depicting really great technical images but also the story behind them was very meaningful.”

“Beside every image was a very detailed caption explaining what you don’t see in the picture, and I think without that caption you wouldn’t be able to feel as much as you would with it,” Chen said.

After exploring the different exhibits and displays, the students attended a media ethics class, led by a Newseum staff member. The students participated in a discussion on how journalists might handle special moral challenges when writing a story, the difference between law and ethics, dos and don’ts for publishing controversial images, and other relevant issues.

The trip also gave a better grasp of today’s media climate. “I really liked the media ethics seminar,” Hilliard said. “With all the allegations and things like fake news, and Jim Acosta’s press pass being taken away, all of these things are happening in journalism and they’re really important for us, the next generation, to understand these things and learn from them.”

Likewise, the exhibits also highlighted how late-night talk shows have become a dominating factor in today’s media cycle. The Newseum’s Internet, TV and Radio Gallery, which plays various clips from skits in popular late night shows, examines just that. “Already, late night hosts are a big part of today’s culture, especially in politics,” Chen said, “but I think that it’s important for people to understand the difference between news and late night talk shows.”

Current media frenzy surrounding politics, foreign policy, school safety, and many other issues all have an effect on student journalism. The Newseum provides insight to the history of the news industry as a whole, as well as many current issues. “I think there’s something everyone can enjoy,” Hilliard said.