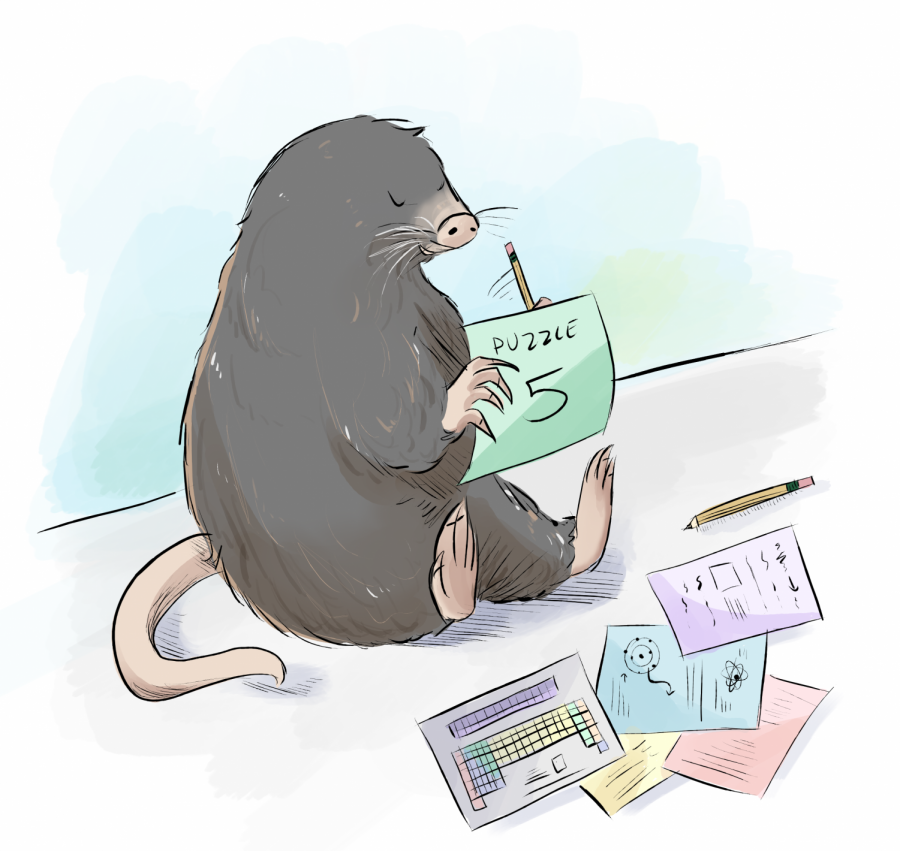 One puzzle created on Twitter, for example, asked participants to identify images of minerals and required knowledge about both mineral composition and hardness to solve. Another puzzle cleverly combined knowledge about chemistry, astronomy, and even cryptography.

“We started making the puzzles during the summer, probably around July or August,” senior Grant Yang, a Hunt organizer and puzzle writer, explained. The writers’ hard work clearly paid off, garnering praise from many students for the puzzles’ difficulty and clever writing.

Twenty nine teams signed up this year, and three teams finished the entire Hunt by the end of the week, completing eight different puzzles and a special meta puzzle, which required the answers from the previous eight puzzles to reach its solution.

Senior Rithik Sebastian, a member of the first place team, 96 Hours, attributed their team’s success partly to their members’ vast experience in previous puzzle hunts. Sebastian also noted the immense amount of time his team invested into the Hunt. “What we would do was, in school, if we had any free time in any class, we would work on the puzzles. We would work on it all during lunch. And afterschool, the policy would be, as soon as you finish your homework, you start working on the puzzles,” Sebastian said.

Even though participating in the Hunt was time consuming, the majority of teams  efficiently balanced their time between studying and doing puzzles. “In fact, the Hunt was actually beneficial, since it added some fun to the day, and was a good stress reliever from school work,” sophomore Danesh Sivakumar added.

Despite general praise and positive responses, many participants still had small complaints for the puzzle writers. Some suggested moving the Hunt to a different date when students would have more free time. Others, such as Sebastian, suggested re-ordering the puzzles, referencing the fourth puzzle of the Hunt, which was generally seen as harder than both the fifth and sixth puzzles and stumped many teams.

It helps you take a break from all your schoolwork and think about something else for a week. I think that it’s a good escape for students.”

Participants also had varying opinions about the amount of science embedded in the puzzle hunt. Sophomore Jaewoo Chung said, “I feel like this might make it unfair for some people, but there should be more puzzles that require a base knowledge of science. It’s fair because everybody can just look it up on Wikipedia and find out the correct way to do it.”

While the Hunt generally went smoothly, an issue with cheating also caused controversy. A member of a sophomore team found one of the puzzles in the Hunt a day before the competition officially began. After finding out from certain sources, the puzzle makers quickly changed their grading system to a more secure one using bitly links and moved to disqualify the cheater on the sophomore team.

After the Hunt began, the puzzle makers also warned that they would disqualify anyone that shared information with other teams. Both of these actions led to a mixed response from participants.

“I think they should have spent more time figuring out the truth before immediately moving to disqualify someone that day,” Chung said.

Sebastian agreed and added, “I feel like, if anything, either disqualify the entire team or just like find some way to hinder them to some extent. Disqualifying just one person kind of just excluded them.”

In spite of the controversies over cheating, the Hunt was a very successful event overall, having a higher turnout than in previous years. Participants in the hunt clearly expressed their enjoyment with the Hunt, too. “It was fun to solve each individual puzzle and go, ‘Oh! That’s it!” Chung said.

The hunt organizers urge more students to join in the fun and participate in the Hunt next year. “The Hunt not only makes you have to think outside of the box, but it also helps you learn new scientific concepts,” Yang advocated. “It helps you take a break from all your schoolwork and think about something else for a week. I think that it’s a good escape for students.”