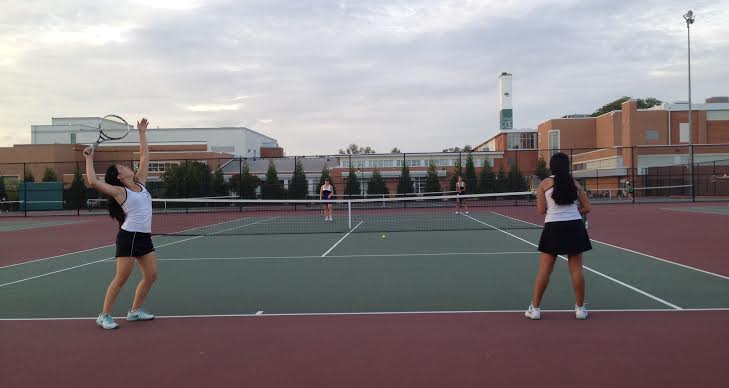 On a brilliantly sunny Monday afternoon, the RM varsity girls tennis team faced off against rival Division I team, the B-CC Barons, in an epic four hour showdown that concluded in a blazing victory for the Lady Rockets. The match was the most crucial of the entire season; the team, having already fallen to three Division I schools (Whitman, Churchill, and Wootton), went into the match knowing that it was one of the last chances for RM to defend their prestigious Division I position. With immense pressure on the starting players, the Rockets were prepared to do whatever it took to secure a win, relying on their remarkable team spirit and positivity to manage a 5-2 victory.

Though it may sound like a wide margin of victory, the team had to fight long and hard in order to prevail. With the singles matches finishing well before sunset, the Rockets led the Barons 3-1 after handy wins by 2nd singles Cynthia Song, 3rd singles Mia Deng, and 4th singles Piper Feldman. However, the RM girls needed at least one doubles match to end in their favour to clinch the sought-after victory. Although two of the RM doubles teams managed to win their first sets, all three doubles matches were prolonged to three sets after admirable comebacks by the Barons.

Yet the pairs refused to be discouraged. Battling valiantly and tirelessly from 3:20 p.m. to almost 7:30 p.m., with the spectators and the players themselves hardly being able to see the tennis ball in the gathering darkness, the entire RM tennis team managed to triumph due to the inspiring efforts of four seniors at 1st and 2nd doubles. “They really pulled through for us,” said senior and 3rd doubles player Akanksha Girish. “They’re the entire reason we’re still going to be in Division I next year.”

The first to finish and secure the team’s triumph were 2nd doubles players and seniors Liz Choi and Raveesha Arora. Losing their first set with an incredibly close score of 6-7 (1-7), the pair executed an exhilarating comeback in the second, scraping a 7-6 (7-2) win. With the rest of the pumped up RM team watching from the sidelines and screaming their approval, Choi and Aurora lobbed, volleyed, and smashed their way through the third set to achieve an amazing 6-4 victory.

“I knew it was down to me and Liz, and also Cassie and Rachel [of 1st doubles] to carry the team. Of course, with all our teammates cheering behind us, we couldn’t not win. There was a lot of pressure, but I’m really proud of how we handled it, and I’m so happy to have made the team and coach proud,” said senior Raveesha Arora after coming off the court.

Though RM had already accomplished the required 4-2 lead with the 2nd doubles win, a majority of the team, determined to show their love and support to fellow teammates and seniors Cassie Ulvick and Rachel Do, stayed until dark to watch the brutal 1st doubles match.

Having won their first set 6-4, Ulvick and Do suffered a disappointing setback after just barely losing the second set 5-7. It seemed like smooth sailing for the Lady Rockets in the third set when they broke the Barons’ serve and surged ahead 4-1. However, after some great points, long rallies, and multiple deuces, the Barons were able to come back from their deficit and lead 6-5. Yet Ulvick and Do proved indomitable, refusing to crumble under the pressure, and in a stirring display of teamwork and exceptional play, were able to tie the set at 6-6. After gaining momentum, the pair quickly finished the exhausting set with a 7-2 score in the tiebreaker, inciting nearly deafening cheers from remaining teammates.

To follow up on this huge milestone of a victory, the Rockets will face Division I competitor Blair at home on Wednesday, September 30, at 3:45 p.m.