With leaves falling in shades of red and orange and thick knit sweaters gracing the halls, the fall season has finally begun. Many would agree that the best way to spend a relaxing fall evening is to enjoy some acoustic music or poem readings in a quiet and ambiently lighted space. Last Friday night, Oct. 26, RM’s literary magazine, Fine Lines, hosted a cozy Coffeehouse, featuring music, literary performances and even a costume contest.

Coffeehouse was a welcoming experience for all. Audience members were encouraged to be inspired by performers and sign up to perform themselves. A variety of talents were showcased, including acoustic singing, duets, acapella, poetry, slam poetry and even original work.

The poetry readings were impassioned and dramatic with powerful messages about society. “I think it’s a really beautiful and generous thing to bare your heart to someone via art, and Coffeehouse allows me to experience that through the people around me,” sophomore Naomi Louie said. 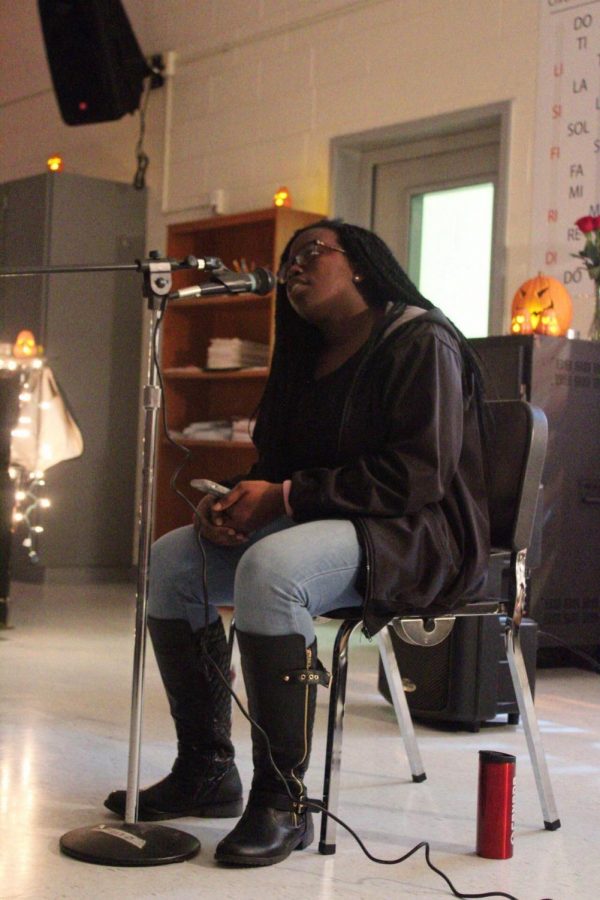 What is typically the choral room became a room filled with darkness, lit only by the soft lamp and fairy lights that entwined around the piano. Plush sofas were scattered in the front of the room, closest to the performers, while bleachers with rows of chairs filled the back.

Decorated for Halloween, the Promethean board displayed a warm inviting picture of pumpkins. The chorus hallway was also decorated with black and orange streamers and a bloody “KEEP OUT” sign. Although Coffeehouse had no actual coffee, the decorations and performances gave the room a calming, open and dreamy vibe, much like an actual coffeehouse.

After around one and half hours of performances, intermission began. Besides the food, intermission included the costume contest, which featured witches, zombies, and a plethora of farm animals. Junior Tudor Postolache won for his king costume and received a Starbucks gift card.

What Fine Lines hopes to accomplish through their seasonal coffeehouses is to give students a space to share and celebrate student artistic passion. “Coffeehouse is kind of a reminder that everyone you walk past in the halls has their own life, and their own favorite song, and that there is so much music in people’s heads that we don’t hear.” Louie said. In general, the Editors-in-Chief tried to make the atmosphere as casual and welcoming as possible so that both performers and audience members felt comfortable to express themselves freely.