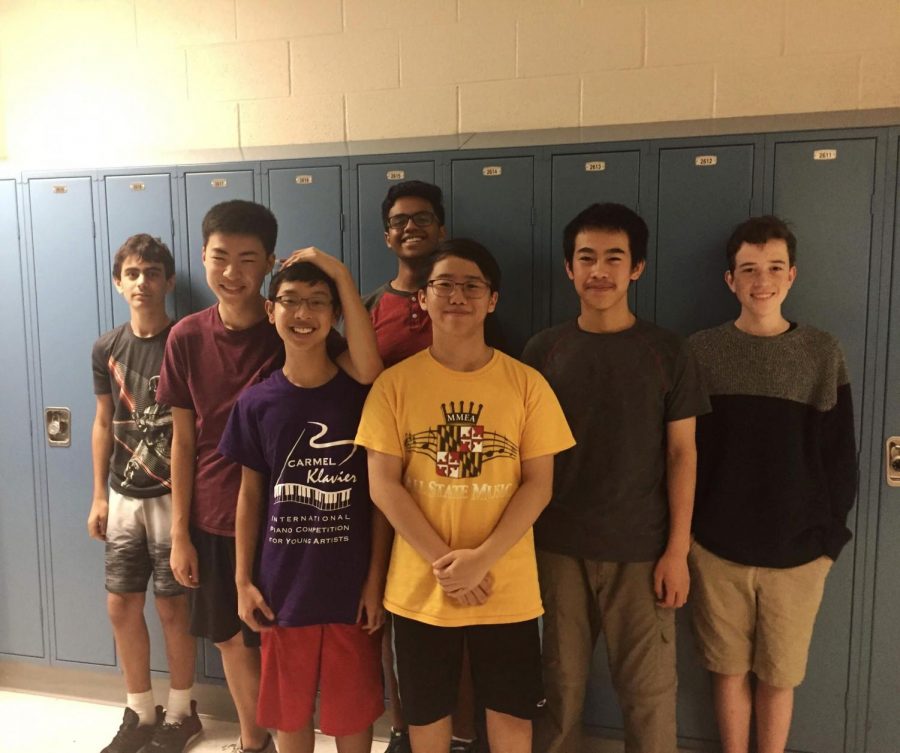 Quizbowl team members won their first tournament of the year on Sept. 22.

On Saturday, Sept. 22, RM’s Quiz Bowl team attended its first tournament of the year at Johns Hopkins University. This tournament was targeted specifically at novices who had only one year of Quiz Bowl experience under their belts. RM placed first overall out of 36 teams.

Since the tournament was strictly for novices, the overall environment was less stressful and competitive. Sophomore Abhinav Karthikeyan said, “Most of the rounds were not competitive, except the last game, which RM won in a nail-biter.”

Nevertheless, competing against other teams in a tournament setting was a new experience for this year’s team. They had the opportunity to figure out their strengths as well as what they needed to work on. Junior Vice President Derek Chu said, “Obviously coming back from summer, everyone is a little rusty, but I was really impressed with the growth a lot of the players showed. One weakness we could shore up is not waiting for the question to finish being read, especially when the other team is not allowed to answer.”

Another area Chu hopes to work on in the future is a better team composition. Since Quiz Bowl relies on each person becoming an expert in a certain knowledge area, a good team needs to have members who are well-versed in a variety of topics. “Our Quiz Bowl team favors some subjects much heavily than others, but to be nationally competitive we have to shore up our weaker subjects,” Chu said.

Quiz Bowl is a competition where teams of four compete head-to-head in a fast-paced, buzzer-style tournament. The toss-up and bonus questions the teams have to answer range from a variety of different subjects, including but not limited to “history, literature, science, fine arts, current events, popular culture, and sports,” according to the official Quiz Bowl website. Toss-up questions are answered individually and range from difficult to easy, and correct answers to these questions allow the team to collaborate on a three-part bonus question.

Teams attempt to answer both toss-up and bonus questions to earn points, and the team with the most points at the end wins. These games usually have around 20 questions and can take up to 30 minutes.

Quiz Bowl is not just about individually answering trivia questions, however. There is a definite teamwork and strategizing aspect to the competitive game. Chu said, “There is no way that anyone can know everything, so it is important that we learn to split up the work and strategize during the matches. Since the competition covers such a wide spectrum of knowledge, you have to trust your teammates that [sic] they are able to pick up the subjects that you don’t know as well.”

The teamwork aspect of Quiz Bowl could also be seen through the comradery between team members. “It was amazing to see everyone working so well with each other. If someone answered a question wrong, we’d brush it off, and if we answered it right, we would cheer for each other and give high-fives,” Chu said

In recent years, Richard Montgomery has had a strong Quiz Bowl team, and last year, they managed to place ninth nationally. With many new faces in addition to returning ones this year, the team hopes to continue, or even beat, that record. Chu said, “Despite losing three of our strongest seniors last year, I think our team this year has the opportunity to be just as good, or even better, than before in a year’s time.”

Karthikeyan echoed Chu’s sentiments and said, “I believe that we could make a nationals run if the team keeps studying and working hard.”

RM Quiz Bowl is looking forward to a variety of tournaments in this coming year. Chu said, “It’s great to see so many people interested in Quiz Bowl, and I’m excited to be working with all of them this year to build a strong, excited team.”