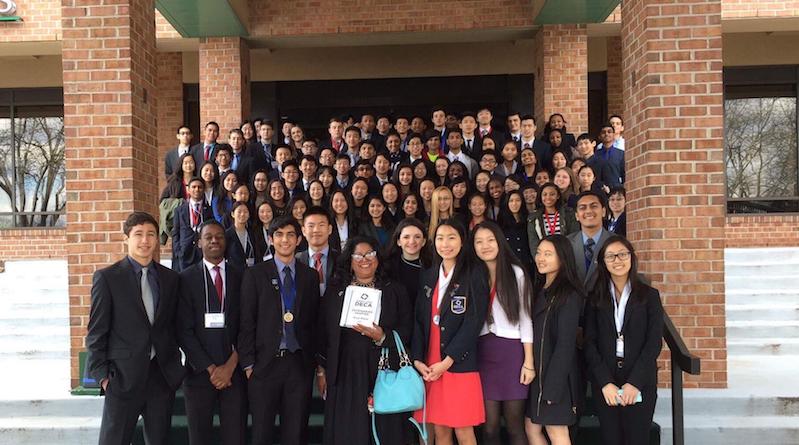 The Richard Montgomery DECA club won first place for the second year in a row at the Maryland Career Development Conference, held in Ellicott City, Md., on March 2 and 3. The RM club edged out Walt Whitman High School and Reservoir High School, which took second and third place respectively.

DECA, a club which specializes in entrepreneurship and business, has been in high schools for over 50 years. The RM chapter of the club has been active for four years, and had over 100 members in attendance at the state conference this year.

The competitive events of the DECA conference revolve around different sectors of business, ranging from Finance to Tourism and Commerce. Students are placed as either individuals or teams, and have to complete certain activities, such as role plays and presentations, to earn awards. “States was a really great experience that gave everyone a chance to apply their business skills to their events, whether it was presenting an idea or finding a solution to a problem or objective,” DECA officer Steven Mendley said.

Depending on the subtopic, there are different parameters for earning points. All events feature a combination of an exam, a written component, and a role play or presentation. RM DECA members placed in the top 3 for the majority of events. Event winners included senior Ashish Patel, who won first place in the Professional Selling event, and junior Sara Reilly and senior Nathalie Berge, who won second place in the Marketing Communications Team Decision Making event.

Between the competitive events, a variety of workshops were held. Workshop titles included “Skills needed to Start a Successful Online Business,” and “Personal Branding.” “We had workshops and got taught a lot about how to be successful in business and how to experience life,” freshman Dina Garmroudi added.

Even though the purpose of DECA States was to compete, students still had a lot of fun. When they were not attending workshops or competing, they were relaxing and having fun with their friends. “My partner and I had an event that finished early, so we spent a lot of time at DECA just exploring and having fun,” sophomore Grace Zhou said. In the evening, a sword swallower performed for conference attendees.

The DECA state conference also provides an opportunity for Maryland DECA members to elect the state officers for the following school year. Two RM students campaigned and were elected for officer positions. Sophomore David Molot was elected at Vice President of Public Relations, while sophomore Emmanuel Corporal was elected Vice President of Region I.

Patel has been involved with the RM DECA club since his sophomore year, and served as co-president alongside senior Paloma Zegarra-Schmidt for the 2016-2017 school year. “In the last three years DECA has given me invaluable experience and insight into the world of business,” Patel said. “Even though it was challenging, being co-president this year has been incredibly rewarding. Helping so many kids compete and win at states has been an unforgettable journey.”