Gender-neutral bathrooms should be a standard in schools 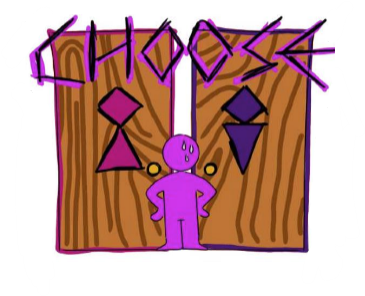 Many nonbinary, transgender, and gender non-conforming individuals are forced to choose which bathroom to enter in schools with gendered bathrooms.

Something as simple as going to the bathroom in school should be comfortable and safe, yet for many transgender, nonbinary and gender-nonconforming people this is not the case. Gender-neutral bathrooms are a necessary part of any building for many people who feel uncomfortable or unsafe in public bathrooms divided into women’s and men’s. Schools must offer these bathrooms in order for everyone to feel welcome in school.

The 2021-2022 Guidelines for Student Gender Identity in Montgomery County Public Schools require that schools provide bathrooms and other gender-segregated spaces that align with students’ gender and that any student who would like to use a private bathroom “because of safety, privacy, or any other reason” is given access to one. The current system at Richard Montgomery is for students to request a pass to single-stall bathrooms from their counselors. Senior Sebastian Sylvester said “So, my counselor is Ms. Anderson… I just like talked to her about it and she was like sure, here’s the pass, and that was about it…so that was pretty cool.” This system allows students who need to access these bathrooms to do so even though all of the student bathrooms have multiple stalls and are gendered.

While providing gender-neutral bathrooms to students is an important step forward, it can be challenging to implement. “There’s only two, they’re both on the first floor, and they’re both inside offices. … one’s in the health room, that’s the one I use, but…I don’t want to walk all the way downstairs to the health room, and I would need to bring my pass, which is a pain to fish out of my backpack,” sophomore Kayden Siegel said. “And if the people in the health room are on break, then I’m just locked out and can’t use it, so then I just walked all the way downstairs for nothing. It’s not very convenient…it exists at least.” The fact that gendered bathrooms are on every floor while gender-neutral bathrooms can be multiple flights of stairs from someone’s class is inequitable.

Students are always told to minimize the amount of time spent out of class, but under the current system of accessing private bathrooms, some students must miss significant amounts of class every time they go to the bathroom. Some students have to settle for a bathroom that makes them feel uncomfortable or unsafe due to the inconvenience of getting to the private bathrooms. A system that creates such a great disparity between different groups of students must be improved upon to promote equity in other areas such as academics and safety.

Despite the flaws of the current system, the importance of access to these facilities can not be understated. Sylvester said, “The pro, right now, I would say, is I am not as afraid to use the bathroom.” According to GLSEN’s 2019 National School Climate Survey, 82.1% of transgender students avoid school bathrooms. Allowing students to access bathrooms they feel safe in is extremely important because it presents a school environment that they can thrive in along with other students.

With the creation of any new system, there are issues that must be solved. Assistant principal Veena Roberson said, “This is I think something that we’ve really started to work through more and more over the course of this year, and so I think there’s a lot of work that still needs to be done with it.” Due to student feedback and changing MCPS policy, Richard Montgomery should be able to accommodate every student with a system of accessing bathrooms.

While it may sound trivial, bathroom access can shape someone’s experience at school. Without access to bathrooms, they feel safe and comfortable in transgender, nonbinary, and gender non-conforming students are excluded from the school building. For a public school meant to educate everyone, basic facilities such as bathrooms should be available to everyone.