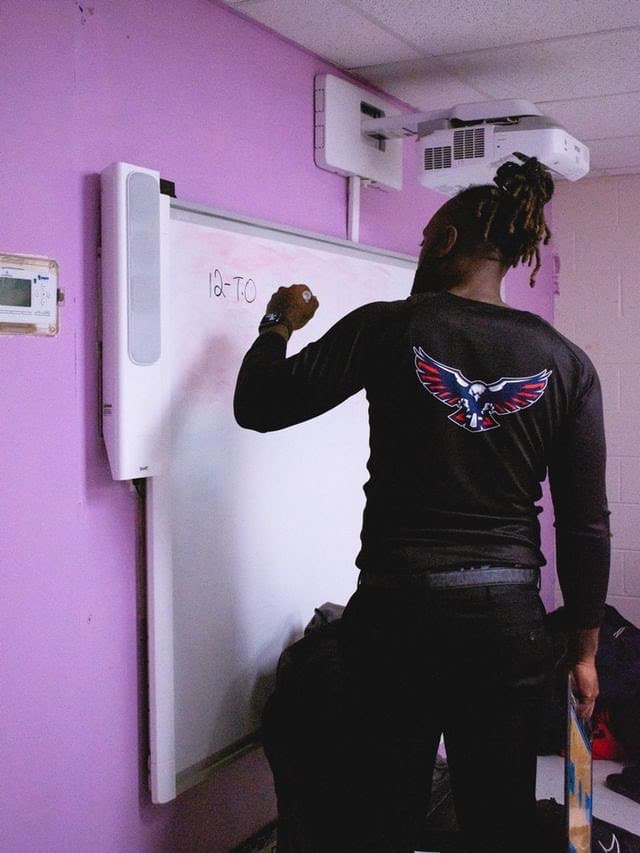 Coach Vito analyzes the game and writes notes as he addresses his team during halftime.

Even though most people know him as Coach Vito and see him as a basketball fanatic, what they don’t know much about is the side of Vito that shines through off the court: The Marvel junkie, the car lover, and the clothing designer.

Most people would never guess that the always apathetic looking Vito is truly a kid at heart, but that is the reality. His imagination runs wild and is constantly churning out new ideas which he constantly channels into his work, whether that be coaching or designing his clothes.

Q:How long have you been coaching for?

Q:Where have you coached?

A: Jewish Day School, Quince Orchard High School, Good Counsel High School, and National Christian Academy. And I run “Team Vito”, it’s a non-profit organization that I’ve been running for about 9 or 10 years. Right now I have nine teams. We’ve done a lot to give back to the community. We do a ton of fundraisers. I think it’s great for the kids to know that they play an important role in giving back to the community. They need to learn that from a young age.

Q:Did you grow up in Montgomery County?

Q: What schools did you go to in Montgomery County?

A: I went to Quince Orchard, Watkins Mill for a day, and Gaithersburg High School.

Q: Why do you enjoy coaching?

Q:What are some things people may not know about you? Some hobbies and what not.

A: I’m a crazy Marvel fan, along with Transformers and G.I. Joe. I also like sitting solo in the car- it’s my happy place. It gives me space and time away from everything sometimes, which we all need at some point. And I love Lebanese food. The diet is so healthy but it doesn’t take away from the taste, youknow? It’s great. I also love designing clothes. I have my own clothing line called Everything Dope. It’s athletic apparel- everything you wear from there is dope! It’s awesome!

Q:Why do you enjoy Marvel and designing clothes so much?

A: Marvel truly feeds my imagination. I watch it and see things and I wish I could do them. Marvel satisfies that thirst, my mind travels a lot. I think that I would be the male version of the Scarlet Witch or Dr.Strange. The way their minds have the power to control their abilities is something that I feel that I could relate to. And about the clothes. It also has to do with satisfying my imagination. I have ideas in my mind and I just like to see them come to life, and one way of doing that is by designing clothes. I also channel that imagination into my coaching. I can envision what’s going to happen so it helps with drawing up plays during the game, things of that nature.