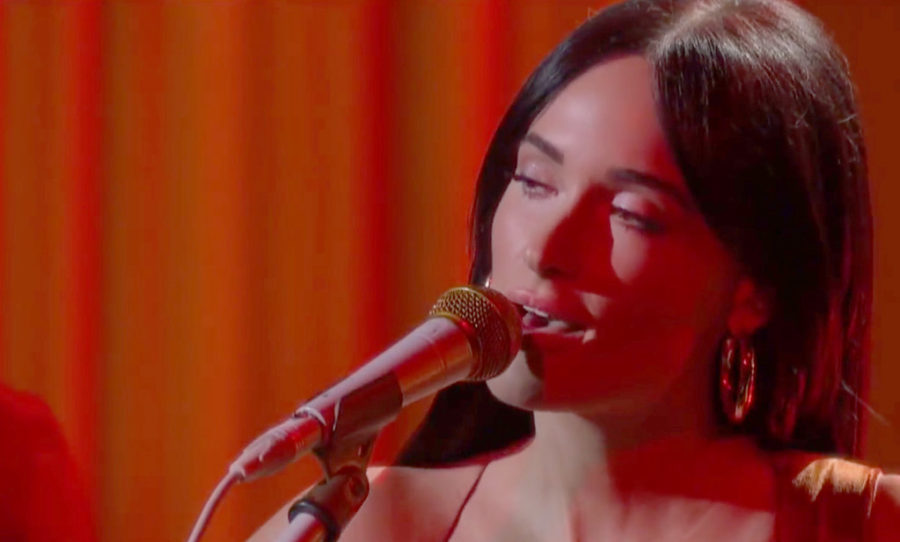 Kacey Musgraves’ new album, “star-crossed,” released on September 10, 2021. If I were to summarize the entire album in one line, it would be off of the song, “justified” with the lines “healing doesn’t happen in a straight line.” Overall, the tracklist was a hit, as each song leads beautifully to the next and does not give you emotional whiplash. The folk/country-inspired music lends itself to the storytelling of the album, as a country song would inspire.

The titular song “star-crossed” sets up Musgraves’ sound for the album. The lyrics perfectly capture the storytelling of the Romeo and Juliet-like couple. “Two lovers ripped right at the seams” and “You came and took your things away” create a conflict between a couple wanting to leave each other but also wanting to stay. The production of the song has an ethereal opening with Musgraves’ soft warm tone, and the guitar sets in to create a Disney-like sound, quickly combated by the drums, bass, and electric elements to the song. The album opener builds up and sets up the rest of the album

Part of the album is a push and pull of the end or near the end of a relationship. “If this were a movie…” is the first really melancholy track on the album. The narrator prays for the romantic things of movies to happen, while she waits in her house for her lover to return. “Am I the stone in your pocket/ That’s weighing you down?/ Or the face in your locket/ That you wear all over town?” are the opening lyrics to the song, piggybacking off of “good wife” in that she feels like a burden to her lover. “justified,” making waves by being performed naked on SNL, is the aftermath of the previous song.

Some thematic standouts in the album include “simple times,” and “there is a light.”  “simple times” is Musgraves’ plea to return to her teenage years, with simple lyrics just showing her longing for a simple time.  “there is a light” uses the beautiful imagery of what many say comes with death—a light at the end of the tunnel. She then quickly juxtaposes it by saying that there is a light inside her. The song accepts things the way they are, as Musgraves prepares to move on. The beautiful flute solo in the middle is a head banger.

“Camera roll” is my least favorite song on the album. The concept of the song is the root of the issue, as the song presents itself as complex, but at the end of the day, all it is saying is that she scrolled back on her camera roll. The song is reminiscent of “New York Summer” by Louisa Melcher, admittedly without a Garageband metronome in the background.

“Gracias a la vida” closes off the album, as it is produced to make it sound like it is being played on an old dusty record. The effect fills its purpose, as the closing to the album being old sets you back in the real world, a turnaround from the opening. However, it then goes into a techno-like production. If this part had been cut, the song would have ended the album perfectly. Instead, you’re left with this piece that does not fit in with the remainder of the album.

On a first listen, my favorite song is “breadwinner.”

“breadwinner” is the opposite of “good wife.” The narrator is challenging her husband, becoming insecure as she becomes more successful. “Bull all of his wounds ain’t an excuse/For you to put up with how he treats you” is the standout lyric from the song, as musically it is the fierier of the album.

Arguably, the worst thing about this album is how similar every song sounds. While consistency in an album is important, each song should feel new. If this album was played to someone all at once, it would be drab and would all blend together. The final blow, the final taste of bitterness of a mostly sweet meal, is her choice of singles. With the exception of “breadwinner”, the singles feel like meek attempts to get on a chart somewhere, particularly “simple times.”

Overall, the album is relatively good. The music is evocative and Musgraves’ voice is moving while also smooth. The album is definitely worth a listen, but it’s a bit forgettable. The story follows her journey through healing, although it is sporadic, and how that has affected Musgraves. The album is cohesive, and a few standout songs will definitely be making their way into my playlists.