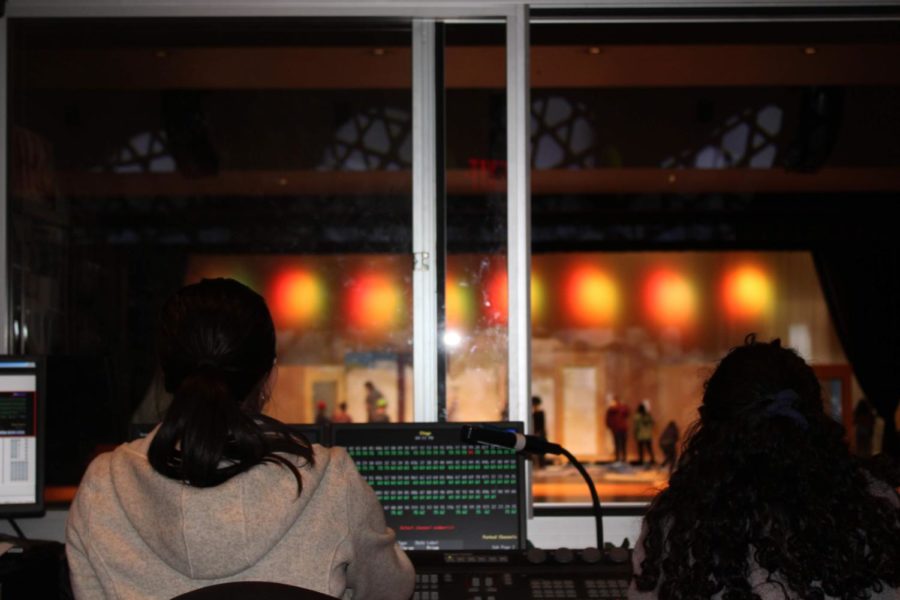 For the first time since the pandemic began a year and a half ago, the Black Maskers, Richard Montgomery’s drama club, will be having a live play in-person at school, but with a couple of COVID twists to better protect students and staff involved in the production.

To best accommodate COVID-19 safety guidelines, Black Maskers is swapping the usual fall musical with a regular play. Traditionally, students can look forward to a full-fledged musical in the fall, and a more toned-down but equally as anticipated play in the spring.

The show will be held on Nov. 12, 13, 19, and 20 and is based on the 1941 play “Blithe Spirit.” Spectators should be prepared to follow MCPS COVID-19 guidelines, such as wearing masks, throughout the entire performance. Crew members, and potentially the cast, will also have to abide by these rules.

The director of the play, Laura Andruski, and the Black Maskers board made the decision to switch the spring and fall productions to protect the students and staff in Black Maskers. “With the musical, you generally have a really big cast and we wanted to do the best to prevent that so with our play we have a much smaller cast,” junior and sound chief of Black Maskers Anne Moser said.

Having a play rather than a musical also limits the production size, as a musical typically includes musicians and dancers along with the actors.  “We had to limit cast size, which a lot of the actors were upset about because it gives less people the opportunity to audition and less people the opportunity to be on stage,” senior and assistant director Aylin Apaydin said. “[It’s] not ideal at all for our club because we really strive for inclusivity and having as many members as possible is really valuable to us.”

There are only seven cast members, who were chosen out of the overwhelmingly large number of aspiring students that all have the same passion for acting. However, there is some silver lining. “Because we had a much smaller cast, we put a lot more people on crews. And so, larger crews means that there will be more attention put on things like special effects, things like set design, set decoration, costumes, and makeup, there’s gonna be a lot more focus on those things, so although we’ll be having a smaller cast, the show might be more design-wise a little bit more fun, cooler.” Apaydin added.

Some have suggested mandating vaccines for cast and crew members to keep Black Maskers COVID free. “We’re not sure if we will require vaccinations for the club. We know that the sports’ teams have, just this week, started requiring vaccinations for team members, so there’s a possibility that that requirement might spread to other clubs. But, there’s no guarantee that it will spread to Black Maskers,” Apaydin said.

The final decision on whether cast members will be masked during the actual performances has not been made yet but Moser ensures that the decision will not be made lightly, as it will be made along guidelines from health officials. “We wouldn’t be doing this play if we didn’t think we could pull it off safely and a lot of hard work went into it so everyone should go and see it!” Moser said.

As for the story itself, “Blithe Spirit” is a light-hearted story, hoping to make audiences laugh. “It’s a farce which is kind of like a comedy…it’s basically about this guy and he contacts a medium to get in contact with his ex wife and he has a current wife at the time and there’s just a lot of shenanigans with that,” senior board member and crew member Rae Culligan said.

Last season, the club put on an online edition of CLUE, which was the play that was scheduled, but was unable to make it to the stage. Although Blithe Spirit won’t look like any Black Maskers production in previous years, Apaydin as well as other members are very grateful to be able to have a live production. “I think just in general, Black Maskers’ shows are always something to look forward to for students, whether during COVID or not. And we’re just really happy that we’re able to get the spirit of having shows going on, back, during the pandemic.”

You can buy tickets for the “Blithe Spirit” beginning October 1 through the Black Maskers website http://www.richardmontgomerydrama.com/ or at the door for an additional $1.00.