‘I can see myself in my students, but my students can also see themselves in me’: Being a teacher of color at RM 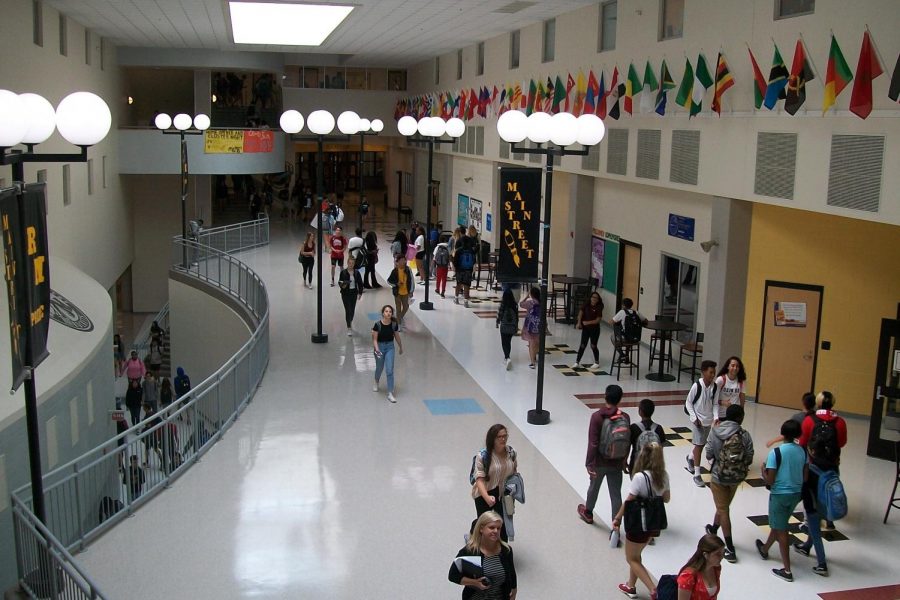 Despite the relative diversity of RM’s student body, the number of teachers of color at RM is still limited.

In 2018, over 70 percent of MCPS teaching staff was white. This means that of the 13,698 teachers in MCPS, almost 10,000 of them are white — leaving only roughly 4,000 teachers of color. The lack of diversity in the teaching staff of MCPS as well as throughout the country is no secret. However, the discussions surrounding it are often centered around the perspectives of students of color, and although that is undeniably a crucial point of view, another point of view heard less often is that of teachers of color themselves. So what exactly is it like being a teacher of color? Especially at a school with a student body as diverse as RM’s?

The experiences of the teachers of color at RM, though different from each other, have led them to make major impacts on their students. No matter their experience as a student of color themselves, they have come to realize the importance of representation for students. Two RM teachers who have contrasting upbringings are chemistry teacher Akshay Gandhi and biology teacher Bessy Albaugh.

Mr. Gandhi, an Indian American teacher, grew up attending MCPS schools. He attended Cabin John Middle School and then Wootton High School, where teachers of color were very limited. “Not many [teachers] weren’t white. I’d say 80 or 90 percent of my teachers were white.”

Yet, even with the few teachers of color that he did have, he was never really able to form any connections with them, nor did he seek out to do so. “It was weird because in high school, I was very much like, ‘My color doesn’t define me; I don’t want to be known as another brown guy doing brown guys things,’” he said. “I was trying to be like, ‘I’m my own person, I’m not defined by my race, so I don’t need to go seek out and find people who are minorities because I’m not defined by that.’”

There’s a certain way that you are with people who understand where you’re from, who have similar life experiences.”

Due to this mentality, Mr. Gandhi admits that he was scared that when coming to RM, he would not be “brown enough” for brown students. However, this turned out to not be the case. “Low and behold, so many kids were just so excited to have a teacher of color in general, not even just a brown teacher, but a teacher of color in general as their teacher.”

Mrs. Albaugh, a Latina-American teacher, had a very different and even unique experience as a student. She went to a small private school in Prince George’s County for lower-income families where the student body was in large part Black or Hispanic/Latinx. The staff at her school were equally representative of the student body, with hardly any white teachers or educators. Mrs. Albaugh had the opportunity to connect with her teachers on more meaningful levels, not only because of the size of her school but also because there was an understanding that came with the fact that she could see herself reflected in them.

In college, things shifted, and her experience became more aligned with that of countless other students of color attending predominantly white institutions. “College was very difficult for me to feel like I fit in. For the most part, it was hard to find someone who looked like me and feel like I made a connection with another person.” She also often found that she had to assert herself more than others, a feeling that many teachers of color relate to. “As a person of color you have to be like, ‘I belong here, I’ve worked hard to be here just as much as anybody else.’”

Before coming to RM, Mrs. Albaugh returned to Prince George’s County to teach. She was met with a student body as diverse as hers once was and also a majority of fellow teachers of color. Because of this, adjusting to the staff at RM after teaching in Prince George’s County was difficult. She felt as though she had to hide part of herself because she did not know how her majority-white counterparts would react.

Though I am Indian and I am brown, it’s not the only sole characteristic that I have. Many students have similar experiences.”

“I don’t want to say you put on a face, but there’s a certain way that you are with people who understand where you’re from, who have similar life experiences. So when you come somewhere else, you have to keep some things quiet and not mention your background because it’s just easier that way,” she said.

Both Mrs. Albaugh and Mr. Gandhi experienced having their background affect how people viewed their career paths. Mrs. Albaugh felt as though people sometimes did not take her seriously as a woman in STEM because of her lower-income, minority background. As for Mr. Gandhi, as an Indian American who was good at both math and science, his family and others expected him to become a doctor or go into research, so his decision to go into teaching raised many questions. “Why can’t anyone be what they want to be without being defined by their race,” Mr. Gandhi said. Even still, both of their hearts are in their position as science teachers at RM, with them both being part of the small percentage of RM’s teachers of color.

Their role comes with both advantages and disadvantages. On one hand, they get to be the representation students minority students need at RM. But, on the other hand, they have to grapple with microaggressions, a disconnect with their white colleagues and the fact that a large part of why they were hired could just be because they would diversify the school. “In general, I feel weird about it — I just wish it wasn’t a thing. I wish I didn’t even have to think about it, but I do,” Mr. Gandhi said.

Teachers of color know firsthand what it is like to go to a school where they cannot see themselves in their teachers and also what it feels like to be the only POC in the room. “Most of these kids aren’t defined by their race or ethnicity, but it’s cool for them to see someone in my shoes where I was born here, I was raised here. Though I am Indian and I am brown, it’s not the only sole characteristic that I have. Many students have similar experiences,” Mr. Gandhi said.

Each teacher of color at RM and across the county brings a unique perspective, such as those of Mr. Gandhi and Mrs. Albaugh, that allow students of color to finally feel represented in those who teach them. While it comes with added pressure and ups and downs in their journey, the impact they can make on students makes it all worth it to them. “To be somebody that students can see, like I look like the faces that you see at RM, to me that was very important … I can see myself in my students, but my students can also see themselves in me,” Mr. Gandhi said.

Activate Search
Jump to Comments
Share on Facebook
Share on Twitter
Share via Email
Print
Scroll to Top
Home
‘I can see myself in my students, but my students can also see themselves in me’: Being a teacher of color at RM