RM Softball cruises to a successful season in return to competition 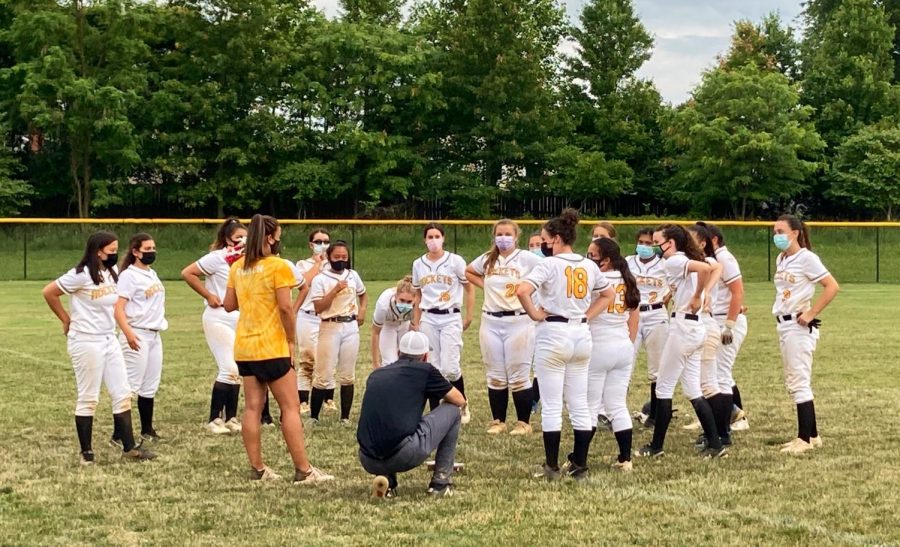 The RM Softball team finished the regular season 7-2, scoring an astounding 67 runs over the course of its last 4 games. The team’s season came to an end at the hands of Northwest High School.

On January 19, Montgomery County announced the spring sports season would be allowed to return in person, and Richard Montgomery began preparations for the start of the softball season. Due to the tumultuous conditions of this school year, there were not enough players to create a varsity and junior varsity team, leading the varsity softball team to proceed with 20 players, its largest roster in recent history.

The Rockets got off to a great start this season, with a 4-1 record in their first five games. They began the year with an impressive 13-1 victory against Gaithersburg High School. Their lone loss in this stretch saw the Rockets come short, losing 8-7 to Walter Johnson.

Their third game of the season, against Montgomery Blair High School, got off to a rocky start. Despite getting off to a rough start by giving up five first-inning runs, the Rockets didn’t give up. “Typically, when we go down by a lot at the beginning of the game, we have a hard time bouncing back,” said varsity softball coach Kelly Callan, “The girls were resilient and ended up winning the game 12-7.” This is the first time Richard Montgomery has beaten the Blair varsity softball team in Callan’s tenure.

The team gathered more convincing victories over its next two games,  overpowering Magruder and Seneca Valley by scores of 17-6 and 17-3, respectively.

In accordance with county health procedures, players have been required to wear face masks in games and practices. These new regulations to the season has earned the approval of the team. “I’m glad that Montgomery County is requiring that everyone wear masks because it’s still important to stay safe during this time,” junior Natalie Weger stated. The season was also shortened to only ten games before play-offs.

Freshman Marissa Boucher agreed: “I’m more comfortable than I thought I would be with in-person sports, because we’re staying masked all the time, and most of the people on the team are fully vaccinated.”

“While I appreciate MCPS providing athletes with a virtual season, nothing beats being able to take the field and play softball again,” Callan said. “Not only has this season provided a way for the team to compete, but it’s also given our girls a chance to socialize and hang out, which I know they have really missed.”

Despite the cancellation of last year’s season, the team has quickly gotten back into rhythm, largely in part to its swiftness in rebuilding team chemistry. “I couldn’t be happier with how quickly we have come together as a team and how well the girls work with one another,” Callan stated. Seeing as collaboration is a necessary component in any good team, this served as a strong foreshadowing for the Rocket’s success.

Not only are the players working well on the field, but the encouragement from the sidelines has been unparalleled. “I feel that because we have such a large team this year, our cheering and support for our teammates is our biggest strength,” Weger said. “The energy in the dugout and on the field is always positive and uplifting.”

Freshman Lianna Meklir points to the team’s strong communication as the catalyst for the team’s recent success: “I think our communication was very strong these past few games. Good communication is paramount to being a good team.” According to Meklir, one of the key factors to the Rockets rally versus  Blair was due to a lack of communication on the part of the opposition.

Spirits were high throughout the season, with new and old players alike continuing to improve and come together as a team. “I look forward to spending my season on a challenging team that will push me to become a better player,” Meklir said.

Weger shared Meklir’s excitement, commenting, “I’m looking forward to getting closer to everyone on the team and, of course, winning more games!”

“Whether the girls are stealing bases on their own, sliding without hesitation, laying out to catch pop-ups, or just being good people to one another, I look forward to being amazed by them as athletes and people,” Callan exclaimed.

The girls would finish the regular season 7-2, before falling to Northwest in the playoffs. The team went on a tear over the course of the last four games, scoring 17 or more runs in three out of four matchups, all of which ended in a Rockets victory, including a 22-1 drubbing of Magruder.