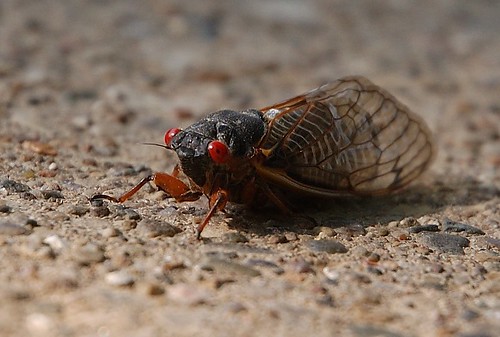 After having been subterranean for the past 17 years, the Brood X cicadas are emerging in the billions on the east coast, with Maryland at the epicenter of the mass emergence.

This month, the Brood X cicadas are coming to the east coast, with Maryland at the epicenter of it all. As the cicadas have been subterranean for the past 17 years, this will be the biggest emergence event since 2004. With Brood X being the largest of all broods, billions of cicadas are expected to appear at the same time.

Maryland Governor Larry Hogan even proclaimed May and June as “Maryland Magicicada Months” to raise awareness about these bugs. “I encourage all Marylanders to take advantage of this opportunity to learn about these remarkable, harmless creatures,” Hogan said. “For a few short weeks this spring, many across the state will have a front-row seat to witness a natural phenomenon that happens nowhere else on the planet.”

Adult cicadas are large bugs with beady red eyes and wings, while nymph cicadas are brown and do not have wings. They usually grow underground by feeding on tree roots for 13 or 17 years, then nymph cicadas come above land first from finger-sized holes and narrow tunnels in the soil.

“ I see cicadas on the ground, in the grass and in the trees. I’ve seen a lot more dead cicadas than alive ones. I think a lot of them get stepped on or get eaten by other animals,” freshman Evelyn Cooper said.

Once on land, nymph cicadas climb up nearby trees, fence posts, signs, and practically any place where they can perform their final molt. After molting, the nymph cicadas transform into adult cicadas and leave behind their shells, which may cause some outdoor areas to become littered with crispy exoskeletons.

“Some kids look for cicadas around the track during lunch for fun, especially near the fence close to the wooded area. One of my friends held three or four cicadas in her hands at a time until they flew away. The cicadas are like one to two inches long,” Cooper said.

Although female cicadas lay their eggs on thin tree branches, which could possibly damage some younger saplings, it is important to avoid using insecticides to fend them off. Insecticides are unlikely to repel cicadas and will end up killing other bugs such as bees and butterflies instead. According to the Baltimore Sun, the best way to protect young trees from harm is by surrounding them with half-inch mesh netting — the right size to stop cicadas from climbing through.

The lifespan of Brood X is four to six weeks; that means that they will be around until late June and leave enough eggs to produce the next generation. These periodical cicadas also serve as a food source for many predators, including squirrels, birds, and even household pets. While eating a few is not harmful for animals or humans, overconsumption can cause digestion problems.

Some students at RM seem reluctant about eating cicadas while others have tried a few. “I haven’t eaten a cicada and I wouldn’t try one because first of all, they’re scary, and second of all, you don’t know if they’re carrying any diseases… so that’s risky,” freshman Joy Jiang said.

“My mom wanted to eat some so she went out and got a bunch. Then she killed, cleaned, seasoned, and baked them. It didn’t taste bad but it wasn’t great, just crunchy. It tastes kinda like a dirt flavored chip,” freshman Joshua Fan said.

Those interested in trying cicadas can easily seek out recipes and cookbooks online. It is important to eat them when they have just molted and pick cicadas from areas where there are no pesticides or other chemicals. People allergic to shellfish should steer away from eating them.

Other than being a crunchy snack filled with protein, these insects do have benefits for the environment. Cicadas aerate the soil and their bodies provide a significant source of nitrogen for growing trees once they die. They do not bite or sting, so there is really no harm in having them around.

However, their noisiness may be annoying to many. Male cicadas have an unique organ called the tymbal organ, and they vibrate that organ to produce a mating call in order to attract females. Their air sacs amplify the sound, allowing their buzz to reach up to 100 decibels in large groups, equivalent to a lawn mower or chainsaw. Warmer weather can also cause them to get louder.

Despite the abundance of Brood X cicadas, they are still targeted by cicada killers, or cicada hawks, which are ground-nesting wasps that hunt and capture cicadas for their larvae to feed on. Cicada killers are about one inch and a half long and sport shiny black and yellow stripes resembling those of a large hornet or yellow jacket. They will only stay active for one to two months during the summer before disappearing.

This year’s Brood X cicada season is a rare event, occurring over the course of just a few weeks. By the time the cycle of singing, mating, laying eggs, and death completes, Maryland outdoors will return to normal, until the next projected generation of cicadas emerge again in 2038.