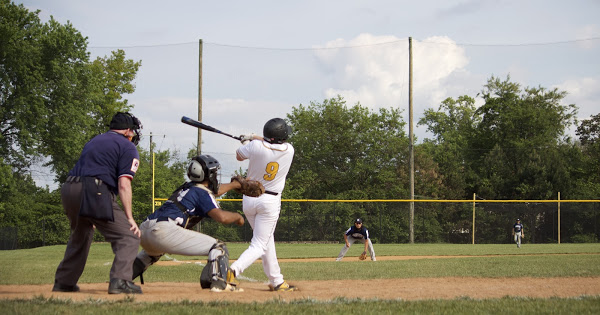 The RM Varsity baseball team faced off against Magruder on May 17th and powered its way to an 11 to 2 victory.

April 17th marked the beginning of the 2021 spring athletic season at Richard Montgomery. Baseball, like other spring sports, missed out on the 2020 season and will have to play ten games in a more condensed time frame. “Losing a year to [COVID-19] has made the boys even more eager to come out and prove we are a winning team and they truly work hard everyday to try and accomplish that,” varsity coach Kyle Culver said.

“With no seasons last year, we were very excited to be able to play this year,” junior and varsity left fielder Justin Kwun said. “Even with a shortened season, the fact that we are able to play motivates us to do the best we can with what we’ve been given.”

“Everyone on our team is getting their first taste of high school competition,”  junior varsity coach Nicholas Pak said. “The only downside to the current conditions is that we haven’t been able to fill up our stadium with fans for the first few games”.

With many aspects seemingly being out of the ordinary this year, coaches and players may inevitably feel less driven than before. As the season has progressed, however, both teams have felt more and more socially cohesive, increasing overall team camaraderie.

“The team has stayed motivated very well actually,” sophomore and junior varsity second baseman and pitcher Brock Green said. “We didn’t have any cuts this year and a lot of the kids we have come to the field ready to play and excited to be out there.”

“Things have felt more inclusive, which is not necessarily a negative thing,” Pak agreed. “Because of this, we have been able to create a stronger bond with each other and have grown a lot as a team.”

With the COVID situation improving, adjusting to any new guidelines has not been a problem. “As baseball is not a very contact sport, it hasn’t made too much of a difference,” Kwun said. “Especially now with much of the team being vaccinated and COVID protocols being lifted, it’s starting to feel normal.”

“As the season has moved along and we are starting to hit our stride things are starting to feel more and more normal,” Culver said. “In fact, they even lifted the mask mandate [on May 14th] for outdoor sports.”

However, the spring season has required all members on both teams to adjust quickly. “The practice and competition aspects feel different because of the tight schedules,” Green said. “Last year we started playing in February and had our first scrimmages in March and we didn’t even start until April this year.”

Now, the players and coaches look into the near future, with varsity working to make it to the top of their division. “I am very optimistic for our outcomes this year,” Culver said. “We got off to a slow start but have come back extremely strong the last two games and are in a position to really control our own destiny.”

The JV team is hoping to maintain their perfect record thus far. “We are manifesting an undefeated season,” Pak said. “We are off to a great start and have yet to lose a game.”

Extrinsic motivation has played a key role in the team’s spirit and motivation. “If we do go 10-0 our coach agreed to let us bleach his hair which makes the team extra motivated…to get out there every day and play well,” Green said.

Positive team chemistry and a newfound eagerness with the sport has led to positive results this season. The JV team is currently still undefeated with a record of six wins and no losses, with three games left to play. The varsity team, after dropping its first two contests, has bounced back by winning four of the last five ballgames.

Keeping this good energy up and maintaining a positive environment even after all of the setbacks shows the determination of every player and coach involved. “We all motivate each other to succeed. We feed off each other’s energy and really work well,” Pak said “We all have a tremendous amount of respect for one another and this is really starting to show.”