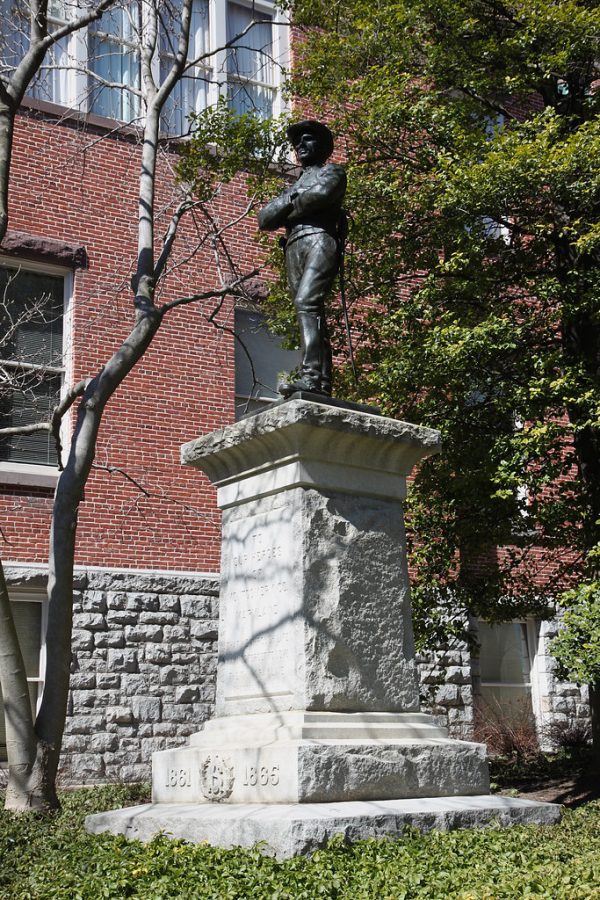 This Confederate statue, constructed in 1913, used to stand at Rockville’s Red Brick Courthouse before being relocated to White’s Ferry in 2017. Photo taken on March 7, 2010.

The Civil War, a time when the country was split between the Union and the Confederacy, is considered the bloodiest war in the United States’ history. Because so many soldiers died, both sides erected statues to honor their fallen. However, according to History, most Confederate statues that served to honor the Confederacy — not the dead — were built during the Jim Crow era and the Civil Rights Movement. For this reason, Confederate statues have become symbols of controversy and hate in recent years, with many being vandalized.

During the Civil War, Maryland was very divided: many people were Confederate sympathizers, while others believed wholeheartedly in the abolitionist movement. Rockville was not spared from this division. “Montgomery County, and Rockville in particular, was very divided. There were both soldiers from the Union and the Confederacy, and they fought for both sides,” U.S. History Teacher Lisa MacFarlane said. According to Peerless Rockville, people who supported the arrest of pro-South citizens had neighbors who welcomed a visiting Confederate General, J. E. B. Stuart. As such, Rockville became home to statues honoring both the Union and the Confederacy.

Until just a few years ago, one of these statues was just down the street from Richard Montgomery at the Red Brick Courthouse. Commissioned in 1913 by the United Daughters of the Confederacy, the life-sized Confederate statue depicted a cavalry private. Its inscription read: “TO OUR HEROES OF MONTGOMERY CO. MARYLAND: THAT WE THROUGH LIFE MAY NOT FORGET TO LOVE THE THIN GRAY LINE ERECTED A.D. 1913.”  According to the statue’s Capsule Summary, it was Rockville’s contribution to the City Beautiful Movement of the 1890s and early 1900s. “[I] feel like it doesn’t belong there,” junior Ariana Kavoossi said. “It’s really not necessary. It just doesn’t really represent anything that has any place anymore.”

This sentiment was shared by many. In an official county statement, then-County Executive Ike Leggett said, “This statue is inaccurate because it pays tribute only to the Montgomery County young men who fought for the Confederacy, not those County residents who fought to preserve the Union and free those in bondage.”

Times have changed and I think people need to recognize that.”

Supporters of the statue were also active, with one by the username “Slowhand1” writing, “Any memorial is part of the history — social, cultural, and architectural — of the community where it stands and needs to be retained…” in the comments section of a Washington Post article about County Executive Leggett’s stance.

In 2017, the City of Rockville’s Historic District Commission voted to relocate the statue to White’s Ferry — the site where many Confederate soldiers crossed the river on their way to battle. According to Montgomery County Media, some people were opposed to the statue’s move because it would “erase part of the county’s history.” However, many also supported the decision. “As someone who teaches history, I want people to be able to learn about history, and that includes both sides: the winners and the losers in any conflict,” Ms. MacFarlane said. “But I think there are museums, books, parks that can do that, and I think that paying tribute to people who really wanted to overthrow our government and create their own probably isn’t the best message to send.”

Even though the County tried to prevent protests by not disclosing the date the statue would be moved, the statue still faced vandalization at its new location. On June 16, 2020, protesters defaced the statue before knocking it down. According to the Washington Post, the Brown family, who own and operate White’s Ferry, placed the toppled statue into storage, where it will stay for the foreseeable future.

The toppling of the statue represents what many people believe: Confederate statues have no place in the country, as they only represent slavery. “The Confederate States of America were basically fighting for slavery, which opposes all foundational American ideals of freedom. Times have changed and I think people need to recognize that,” sophomore Jessica Sun said.