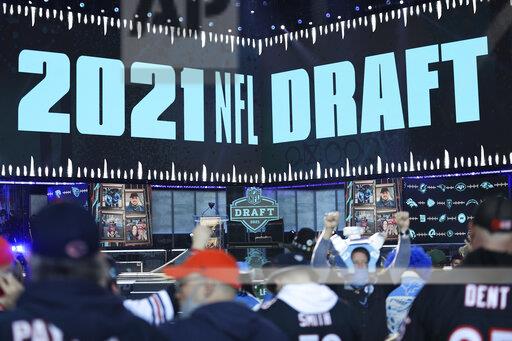 The 2021 NFL Draft is being held live in Cleveland after it was held virtually in 2020. Clemson quarterback Trevor Lawrence was selected first overall.

To the surprise of nobody, the Jaguars selected the consensus top player of the draft in Clemson quarterback Trevor Lawrence. A proven winner with elite pocket presence and physical traits, Lawrence now becomes the franchise cornerstone of a Jaguars team that has lost at least 10 games in 9 of the last 10 seasons.

BYU quarterback Zach Wilson broke out in 2020, after two underwhelming seasons. Wilson threw for more touchdowns in 2020 than his first two seasons combined and showed off his elite arm strength and improvisational ability. The Jets’ Sam Darnold experiment came to a bitter end, but with a talented coach in new head coach Robert Saleh righting the ship, the future is finally looking up again in the Big Apple.

Rumors of the 49ers taking a certain Alabama quarterback grew leading up to draft night, but the 49ers ultimately opted to select the North Dakota State quarterback. Lance is an incredibly raw prospect, and has a lot to learn fundamentally as a quarterback, but has displayed a high football IQ and is a physically gifted player. His inexperience against high competition, however, makes it paramount for the 49ers to not rush him into play, to avoid becoming the next Mitchell Trubisky.

Florida tight end Kyle Pitts may be the most dazzling tight end prospect of this generation. His seven-foot wingspan allows him to make contested catches against any defender on the field, while his 4.44 40-yard dash time and impressive route-running makes him the complete package as a playmaker. Pitts is the highest picked tight end in NFL draft history and provides the Atlanta offense with another explosive playmaker for an aging Matt Ryan.

The Bengals coming into the draft had many pressing needs, particularly on the offensive line. After rookie QB Joe Burrow suffered a season-ending knee injury in 2020, many believed the Bengals would pick a player such as Penei Sewell or Rashawn Slater to help protect Burrow in 2021. Instead, they opted for another playmaker for Burrow, in former LSU teammate and wide receiver Ja’Marr Chase. A graceful playmaker with great football instincts, the Bengals have secured their nucleus for the future on offense with Burrow, Chase, running back Joe Mixon, and receivers Tyler Boyd and Tee Higgins. Here’s to hope that they’ll eventually address their issues on the offensive line.

To put it lightly, rookie quarterback Tua Tagovailoa often looked lost in 2020. The Dolphins’ lack of a big time playmaker was one of the reasons and the Dolphins addressed this need in the offseason by bringing in wide receiver Wil Fuller, and now, Alabama receiver Jaylen Waddle. Waddle is the most explosive athlete in the entire draft, with big-time speed and electrifying route running ability. He provides Tagovailoa with a familiar target (Alabama alums) and increases the pressure for Tagovailoa to perform in 2021.

The Lions have had little reason to be optimistic after the 2020 season. Longtime quarterback Matthew Stafford was traded in exchange for an inconsistent replacement in former Rams quarterback Jared Goff. Top receivers Kenny Golladay and Marvin Jones Jr. departed in free agency, while 2020 first-rounder Jeff Okudah struggled with injuries and consistency in his rookie season.

With major question marks at key skill positions, the Lions opted to reinforce their already solid offensive line, adding Oregon tackle Penei Sewell. Sewell is a generational athlete for the position, but has plenty of room to grow as a lineman. With the offensive line built for the future, the Lions still have a long path to take before they return to relevancy.

Many pondered if Ohio State quarterback Justin Fields would be the pick here, but the Panthers trading for former Jets quarterback Sam Darnold dispelled these rumors. With little firepower at cornerback, the Panthers opted for South Carolina cornerback Jaycee Horn, son of former NFL wide receiver Joe Horn. Horn is the prototypical NFL cornerback, with tremendous coverage skills, and the potential to become a shutdown corner at the next level.

The Broncos followed a similar trajectory as the Panthers, having been linked to Fields in many mock drafts. Despite trading for former Panthers quarterback Teddy Bridgewater, neither him or current starter Drew Lock appear to be the long-term option for the Broncos. The Broncos have a solid team composition on paper, but decided to improve their secondary yet again, taking Alabama cornerback Patrick Surtain II.

While Surtain is arguably the best cornerback in the draft (tossup between him and Horn), cornerback was far from a position of need, having acquired productive veterans Ronald Darby and Kyle Fuller in the offseason, and still having one of the best slot corners in the league in Bryce Callahan.

The Broncos are now set for the foreseeable future in terms of secondary players, but there are still glaring holes in the front seven that still need to be fixed in order for them to have a chance at the playoffs.

The Carson Wentz era came to a bitter end in Philadelphia and it’s not up to Jalen Hurts to turn the ship around. The Eagles’ lack of options at playmaker became evident in 2020, so the team opted for the top receiver available, Heisman-winner Devonta Smith. Smith had one of the best seasons in recent memory for a receiver in college football history, but concerns about his skinny frame prevented him from getting picked earlier in the draft.

Aside from his physique, there aren’t any other knocks to Smith’s ability. He is perhaps the most polished route-runner in the entire draft and possesses the most reliable set of hands at the position. His chemistry with Hurts (former teammates at Alabama) doesn’t hurt either. After passing on immediate impact receivers in Pro Bowlers D.K. Metcalf and Justin Jefferson for less productive options in back-to-back years, here’s hoping that the Eagles finally struck gold.