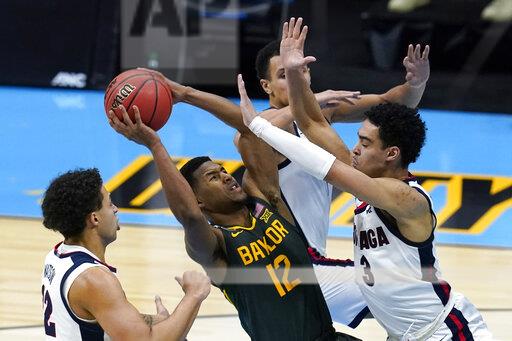 No.1 Baylor spoiled No.1 Gonzaga’s quest for a perfect season, taking down the top-ranked Bulldogs 86-70 in the National Championship Game.

March Madness is known for dramatic upsets, but the 2021 NCAA Tournament was one of the most unpredictable tournaments in recent history. From the very start, it was a unique year. Gonzaga entered the tournament with no losses, which, although not impossible, is always unlikely. It was also the first year since 1976 where usual powerhouses Duke nor Kentucky failed to qualify for the tournament. The Big Ten conference broke a new record by being the only conference to ever have four top-two seeds in an NCAA Tournament, with Michigan, Illinois, Ohio State, and Iowa.

Right out of the gate, underdog teams made their name known to the entire country. Oral Roberts became the ninth fifteen seed to ever upset a two seed, knocking off No. 2 Ohio State in overtime. This remarkable victory was a wrecking ball for brackets on the opening day; CBS Sports reported that after the first day alone, only 108 perfect brackets remained out of the millions filled out.

The first round held several other notable upsets, including No.13 North Texas defeating No. 4 Purdue by nine points for its first ever NCAA tournament victory. Another thirteen to four seed upset this year was Ohio University’s triumph over Virginia. Virginia became the first defending champion to lose in the first round of the tournament since 2012.

Once the dust cleared after the first round, the advancing teams were an incredibly varied group. This year marked the third time in history where every seed except a sixteen seed advanced to the round of 32, according to CBS Sports.

The second round of the tournament had more surprises in store. Few people predicted Illinois’s swift defeat at the hands of No. 8 Loyola University Chicago. This came as a blow to many brackets, as Illinois was favored to win the tournament by nearly 16 percent of all brackets, second only to Gonzaga at over 38 percent. No. 2 Iowa followed their Big Ten rivals out the door, as they were overpowered by No. 7 Oregon, 95 to 80.

Several teams that had delivered startling upsets in the first round continued their victory streaks. No. 15 Oral Roberts defeated No. 7 Florida 81 to 78, securing their place in the Sweet Sixteen for the first time since 1974. No. 3 West Virginia, despite staging a late game comeback, fell to No. 11 Syracuse. Furthermore, No. 12 Oregon State sent top prospect Cade Cunningham and No. 4 Oklahoma State packing.

The Sweet Sixteen and the Elite Eight were significantly more predictable, although No.11 UCLA’s continued success is noteworthy, this time knocking off No. 2 Alabama in overtime.

Although the majority of brackets had No. 1 Michigan losing to No. 1 Gonzaga in the Final Four, UCLA put hopes of a marquee matchup between the two first seeds on hold as they knocked off the Wolverines.

Hardly anyone correctly picked all four Final Four teams. With two one-seeds, a two-seed, and an eleventh-seed comprising the remaining four teams, only 0.0134% of all brackets had all four teams making it this far.

While the final matchup of Gonzaga vs Baylor was fairly expected, it’s worth noting that UCLA gave the top-ranked team of the tournament a game for the ages. Both teams were neck and neck throughout the entire game, with neither team able to relax. Just as UCLA appeared to have sent the game for a second overtime period, Gonzaga guard Jalen Suggs made a game-winning buzzer-beater three off of a half-court heave. The final Cinderella story of the tournament had exhausted all of its magic.

Baylor, on the other hand, made easy work of No. 2 Houston, establishing control over the game with a 25 point lead by halftime.

Entering the final, a majority of experts predicted Gonzaga to beat Baylor and complete their perfect season.

In the end, Baylor defeated Gonzaga 86 to 70, a game that went in a way few expected. Baylor remained ahead of Gonzaga for the entire game, crushing Gonzaga’s dream to win their first ever NCAA National Championship and cap off a perfect season since Indiana in 1976.

Baylor took home its first men’s NCAA basketball title with a near-perfect 28-2 season. While Gonzaga had established its dominance on the national stage all season, the quest for undefeated glory remains unfulfilled.