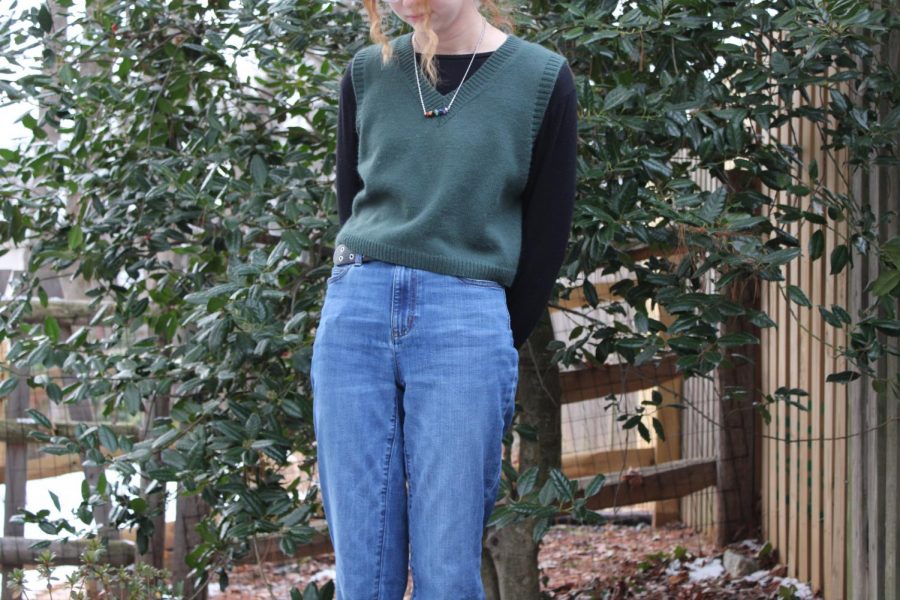 Sweater vests are one of many clothing trends that have gained popularity through media platform use.

With the rise of teleworking, take-outs, and the move to remote learning for thousands of school districts across the country, the pandemic has pushed the creativity of many as workplaces, restaurants, businesses and schools adapt to the new environment.

For many students, the pandemic has served as a surplus of time that has resulted in scrolling endlessly through content feeds provided by TikTok or Instagram Reels. Yet among the continuous rise of online dance trends, Amazon finds, and memes, a surprising player has entered the evolution of entertainment: fashion. With extra time on hand, more students have been able to focus on and develop other interests they might not have considered before— one of which being their own styles.

With an infinite amount of outfit inspo videos downsized to 30 second on Instagram, TikTok, and some YouTube videos, younger audiences—especially students—have taken the ambition and reign towards creative fashion, despite the lack of occasion. Clothing trends have steadily risen throughout these media platforms which is partially due to the expanding reliance and usage of social media. Some prevalent examples include sweater vests, vintage aesthetics, wide leg pants with tighter-fitting tops, and oversized sweaters with formal collars.

The increasing number of TikTok or Instagram Reels users that have dedicated their accounts to posting their outfits, inspiration, preferences, and fashion tips have served as sole contributors to this rise. Consequently, more students have been encouraged to draw inspiration from such accounts and users, and implement the same tips into their own wardrobe.

In addition to experimental clothing styles, this expanding community of fashion has also led to the deprecation of the borders of feminine and masculine clothing items, along with wider appraisal against toxic masculinity towards fashion and make-up. A larger group of males especially, have been rocking pieces that have previously been deemed ‘feminine’ such as skirts and crop tops, while more females have played around with the function and design of suits, formal wear, and vests.

Clothing sustainability has also become an influential factor in student fashion. With more advocacy for environment-friendly fashion companies and the growing popularity of ‘thrift flips,’ such as ThredUp and jewelry brands like Ana Luisa, more students have been open to the idea of thrifting and upcycling old styles. It is understandable why thrifting has become such an attractive choice for shopping as it’s significantly cheaper than major name brands, typically bursts with vintage finds (perfect for the 80s-90s style comeback), and is substantially better for the environment.

On the other hand, a large proportion of students are taking advantage of being in the comfort of their homes. Though the lack of social interaction and events has caused some students to experiment with different styles, it has also spurred the increasing preference of living out their most comfortable pieces of clothing behind the frames of a Zoom call.

Such shifts in style has also played a surprisingly dominant role in the market industry. In fact, according to the Washington Post, multiple brands have had to increase their supply of casual clothing, such as leggings, jeans, and joggers. Sales for dress shoes and heels have also dwindled, being exchanged with slippers and sneakers. Needing to adapt to these changes, many retailers anticipate fashion taking a turn for comfort this year, even if social events and in-person work comes back. Likewise, many malls and clothing brands are preparing for a slower shopping season this year because of the decrease in ‘impulse’ purchases and unstable sources of income.

Fashion has always been evolving— but this year, and perhaps even moving forward, it will have to test the boundaries of seasonal trends and expand its markets to virtual platforms, which will likely result in some prominent shifts in how we perceive fashion. Nonetheless, it’s clear that students and social media will be a heavy contributor to such changes.