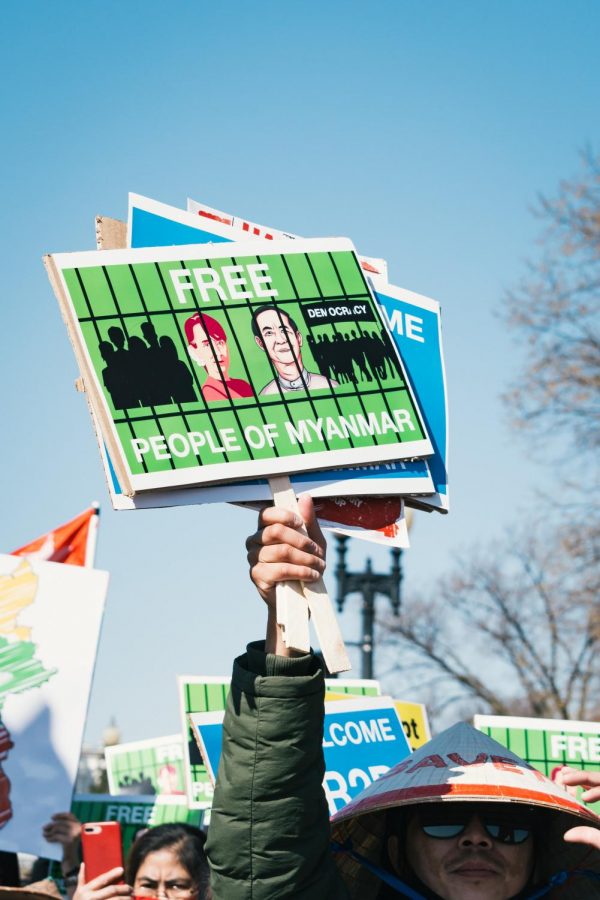 Local protests of the Myanmar crisis are held frequently in Washington D.C. and Maryland.

On Feb. 1, Myanmar residents woke up to the devastating news of a military coup d’etat. The coup was a direct result of the election results in November, where the National League for Democracy (NLD) won a large majority of the seats in Parliament as opposed to the Tatmadaw– the armed forces of Myanmar.

Signs of a possible coup emerged when the military challenged the results to the Supreme Court and surrounded Parliament with soldiers, threatening to “take action.” They proceeded to detain the leaders of the NLD and any related individuals, including cabinet ministers and activists. Upon the official declaration of the coup, the military soon seized control of the country’s infrastructure, imposing restrictions on television broadcasts, telephone and internet access, and commercial banks.

The abrupt change in power evoked widespread concern and fear, recalling memories of Myanmar’s painful history with military oppression that has lasted for decades since 1962. Several major pro-democracy protests in the past have resulted in violence, killing 3000 people in the 1988 uprising and a dozen more in the 2007 Saffron revolution.

A prominent leader that has ardently advocated for democracy and human rights during this period is Aung San Suu Kyi, co-founder of the National League for Democracy. Suu Kyi, who spent a total of 15 years under house arrest due to her activism, is a recipient of the Nobel Peace Prize and the first democratically elected president of Myanmar in 2016. Although she was heavily criticized for her inhumane treatment against the ethnic minority in Myanmar, particularly the Rohingya Muslims, she remains a figure of democracy and hope for Myanmar civilians.

Demonstrations that began with civilians banging pots and pans on the streets have grown into massive street protests. These protests have taken place on varying scales all across the nation. As demonstrations grew in size, the military responded with heightened violence, but that didn’t deter the thousands of people engaged in peaceful protests.

“The purpose of the peaceful protests is to show that the citizens want nothing more, other than just freedom and democracy. We are not like the military junta, we don’t need to resort to violence and terror to get our message across,” senior May Soemin said.

As of March 20, at least 250 demonstrators have been killed by security forces according to USA Today.

“An overwhelming number [of the killed protestors] have been young people — 15, 16, 17 year olds, kids not even our age yet; I really have no other words. They shoot in the streets and into homes, and if they’re not actually shooting, they threaten to; they beat up, steal, loot, burn, rape, kidnap, and torture. I can’t even get into the extent of their atrocities, now and historically,” junior Cara Moe said.

Local protests of the Myanmar crisis are held frequently in Washington D.C. and Maryland.

“A few hundred usually gather every Saturday in D.C., of which there were Burmese people and many others, even some coming in from other states to protest. There’s thousands more of even larger scales nationally and internationally, and it’s really powerful and amazing to see everyone come together,” Moe said.

A remote option of protesting could involve writing letters to foreign embassies or local U.S. government representatives to advocate for foreign policies condemning the Tatmadaw.