Return to R.A.I.S.E: RM coaches make the most of an unorthodox season 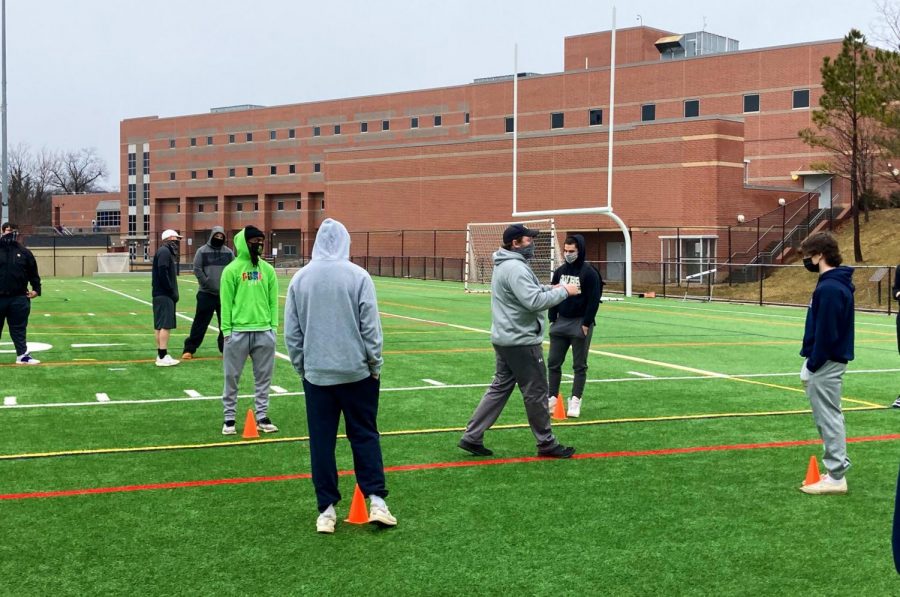 On January 28th, MCPS announced the kickoff of a truncated fall athletic season starting on February 27th. Soon after, an MCPSTV video detailed the new safety protocols that would be introduced in every participating school. Although the thought of returning to sports was an exciting one, the announcement left many coaches worried about how the restrictive policies would compromise an authentic athletic experience. Now, as Rockets across a multitude of sports make their return, their coaches are striving to make the most out of this season.

The first real challenge coaches faced was the abruptness of the announcement and the resulting time constraint, with the typical summer preseason being reduced to only a couple weeks. “I do feel like it all happened suddenly,” girls varsity volleyball coach Gretchen Barber-Strunk said. “If it weren’t for my seniors, I would have chosen to forgo this mashed up athletics season and just start fresh in the fall.”

“As a coach, I had several questions like would athletes have to wear face masks,” girls junior varsity soccer coach Edvin Hernandez said. “What equipment can we use, will we be competing, do coaches have to come up with contactless exercises for practice, among more.”

Because of risks involved with high contact sports, the normal practice routine underwent serious modifications to ensure both player and coach safety. “It is quite understandable, but it does make planning for practices more challenging,” said Hernandez.

Some tangible changes include mandatory masking, limiting the number of athletes per practicing “pod”, a QR code check-in system, and an efficient system for athlete drop-offs and pick-ups. “One of the weirdest parts is not being able to give high fives or bring it in as a team in the same way we always have,” Barber-Strunk said. “Volleyball being indoors has even more limitations.”

However, there are less obvious factors that still pose major challenges to coaches, one of which being the long break that their players have likely taken from competitive sports. “Jumping into the same athletic routine we had prior to March 2020 would simply not make sense,” Hernandez said. “You’re certainly not going to go from 0-100 overnight, it’s a gradual process.”

As is the trend with COVID-19, not everyone, or every sport, has been impacted equally. “Cheer is one of the highest risk sports where COVID is concerned,” said Lee. “So, we are reduced to super old school cheering: cheers & jumps. No stunting.” The switch in seasons has also had a similar impact on the golf team. “Practices feel different this spring because the public golf courses have been very crowded,” golf coach Micheal Kellinger said.

One of the main goals shared by the RM coaches is to run productive practices despite all these health restrictions and changes. They’re hoping that the short season will be worthwhile, the positives of being present outweighing the concerns and constraints.

“We’re cheerleaders, so spacing out is our specialty,” varsity cheer coach Tanya Lee joked. “There’s plenty of memes that went around saying if cheer coaches were in charge of enforcing quarantine, [it] would be done now.”

The situation is similar for girls soccer and volleyball. “It’s been tough not being able to use pinnies, but our team hasn’t been fazed by it,” Hernandez said. “We’re still moving the ball well, practicing our positioning and formation, and getting to know each other.”

While most teams have made strides to adapt to the situation, most agree that it most likely will never be the same. “We have gotten a lot done but with limitations we still haven’t been able to practice like I would like,” Barber-Strunk added. “And the turn out for kids was limited too.”

Now, the next step on the fall athletics agenda are games. On returning to inter-school competition, the coaches appear to feel comfortable. “I think when we start mixing it up, there will certainly be some apprehension on my end,” Lee admitted. “But, we do have many safety protocols in place, and as long as everyone is following them, we should be ok.”

MCPS has limited the pool of competitions to a small number of local high-schools, providing some reassurance to those who want to keep exposure at a minimum. “The number of matches we will play has been greatly reduced,” Kellinger said.This fall-in-the-spring season will be a tough and unusual compromise for everyone, but the coaches are grateful to have their own support system. “My full trust is in this school and its leaders, including our principal and athletic director,” Hernandez said.

“Mr. Freda has been a rockstar through this whole thing/year and really has done a lot behind the scenes to keep us all going,” Lee added. “Like Hamilton, ‘the man is Non-Stop’.”

Through this test of the athletic program’s ability to adapt, the Rockets will hopefully be able to approach next fall season with optimism and start stronger than before. For the time being, however, the implementation of athletics puts the RM community on the right track to a return to normalcy.