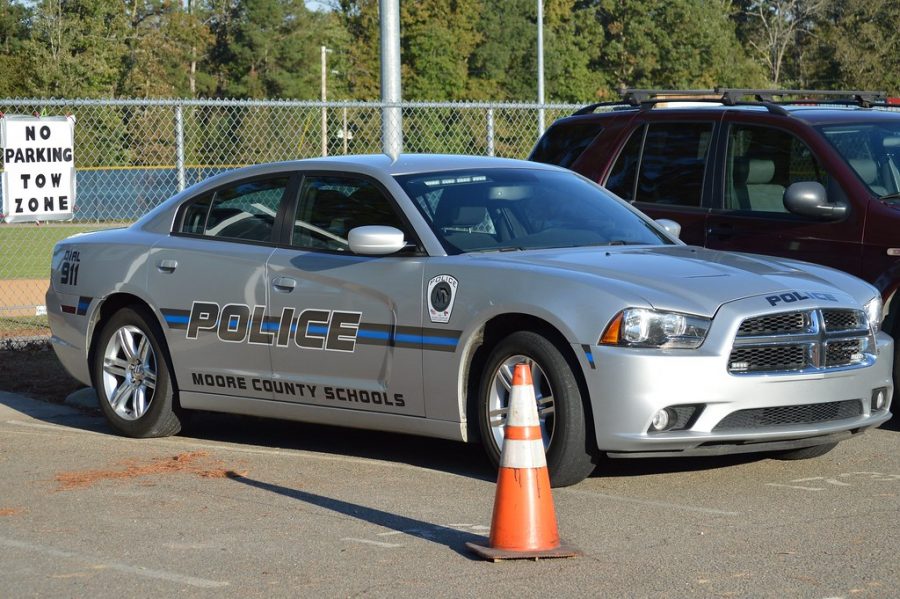 Recently, there has been much debate regarding the role of school resource officers in MCPS schools.

Over the past year, communities across the country have been pushing for police reform in schools. The School Resource Officers (SRO) Program has recently gathered attention from students and staff alike.

School Resource Officers (SROs) are armed police officers that work in collaboration with schools, responsible for preventing crime, breaking up fights, preparing for emergencies, among other duties. SROs also serve as mentors and counselors to students.

The recent controversy in regard to SROs has led many to express their take for the program. With perspectives arising from both ends of the spectrum and everywhere in between, it is hard to tell where the majority of the MCPS community stands.

Despite comments on SROs being threatening, some have felt the opposite due to overwhelmingly positive experiences. Teacher Matthew Waas shares the uplifting interactions he observes between Seneca Valley Highschool’s SRO, Officer Larson, and students in his testimony, describing Officer Larson as a role model.

Waas also highlights the impact of safety discussions between SROs and school staff. “He gives us concrete understanding of situations we would not normally know how to deal with but could potentially one day experience. As a teacher, I feel more prepared for unexpected situations because of his guidance,” Waas wrote.

The National Association of School Resource Officers estimates that approximately 20 percent of all U.S. K-12 schools (public and private) are served by school resource officers. In total, there are currently between 14,000 and 20,000 SROs in service nationwide.

The goal of MoCo’s SRO program is to enhance the safety and security of the learning environment in schools within Montgomery County, Maryland. MCPS has one officer for every high school, 26 in total. The demographic composition is as follows: 10 Black males, 5 Black females, 1 Hispanic male, 8 White males, and 2 White females.

Part of the push to end the SRO program in MCPS is attributed to the national activism for racial justice and equity. Protests calling for an end to police brutality and acronyms like ACAB have raised the question of whether or not these officers actually keep schools safe. Student-led organizations like MoCo 4 Change, YPP, and MoCo Against Brutality have also played a big part in moving towards police-free schools.

“We’ve organized town halls, teach-ins, and helped prepare for BOE hearings. We have met weekly with a coalition of other organizations with the same goal, and are trying to coordinate with police free school movements in other counties across the nation,” junior and co-founder of MoCo Against Brutality Julia Angel said.

Data shows that in the past three years, 83 percent of arrested students in MCPS are Black or Hispanic, despite Black students being 21 percent and Hispanic students being 32 percent of the MCPS student population. A fact sheet created by MoCo Against Brutality cites additional reasons against the program.

Opposers have criticized the program for disproportionately targeting certain groups of students, racial profiling, punishing students differently for the same conduct, and contributing to the school-to-prison pipeline. On the other hand, those who want to continue the SRO program say that although the arrest numbers are disproportionate, they still accurately show who is committing crimes.

“The School Resource Officer program was ostensibly established to keep students safe — but what we have seen, and I have seen with my own eyes, is that it keeps students like me comfortable at the expense of a safe learning environment for many Black and Hispanic students in Montgomery County,” senior Amy Zhai said.

“In our organizing efforts, it has become abundantly clear that the voices and experiences of students, particularly the Black, brown and disabled students that are disproportionately harmed by the criminalization of young people in school, do not hold the weight in this decision-making process,” senior and president of MoCo for Change Claire Gelillo said.

As for supporters, MCPS principals are unanimously in support of the SRO program. Adults also shared similar viewpoints, arguing that police officers are especially needed after seeing incidents of school shootings, and stressing the importance of fostering a healthy relationship between kids and the police. Many parents are more comfortable sending their kids to school knowing that there is a police officer ready in case of violence.

“Bad actors need to be removed and all police absolutely need ongoing training, but removing SROs from high schools leaves a dangerous safety gap and creates a bigger divide between students and police in communities. Yes, we need more mental health specialists, but that is not in place of an officer that can immediately seize a weapon or thwart an attack,” Montgomery County parent Stephanie Hilwig wrote in her testimony.

NASRO also issued a statement after two Maryland patrol officers reportedly verbally abused a child after he ran off campus and his school requested police assistance. The statement outlined a possible unintended consequence of removing SROs, as schools may have to rely on patrol officers to deal with incidents they are not specialized in if SROs are no longer present.

“Most patrol officers don’t deal with children and youth on a day-to-day basis, and often lack a good understanding of childhood brain development and behavior. SRO programs that adhere to national best practices and use only carefully selected, specifically trained school resource officers, however, can mitigate such consequences,” Mo Canady, Executive Director of NASRO, wrote.

County Executive Marc Elrich recently announced that he is ending funding for the SRO program. The next step, whether to fully remove the program or to tailor it in a way that better meets students needs, is still uncertain. Multiple people have encouraged MCPS to divert the $3 million being used to fund SROs into social workers or into training employees in restorative justice.

“We can’t be distracted in an institution where we are told we are safe and protected. I think the county’s executive made an amazing decision by ending SRO’s funding. Not only is he helping save resources that weren’t being put to use, but he’s protecting our students mental health, something that the county has neglected for years,” freshman Lewhat Kahsay said.

However, other students are not as happy. “This aggressive demand to eliminate the SRO program has stemmed from political unrest and the resulting anti-police sentiment nationally, without looking at facts and hard data from right here in Montgomery County. This vocal “defund the police” rhetoric is loud but it is not from a majority,” junior John King said.

“The numbers don’t lie and MCPS School Safety and Security data proves the SRO program works here in Montgomery County, Maryland and in Montgomery County Public Schools – a 51 percent decrease in the number of serious incidents annually in MCPS with a student population increase of 19 percent since the inception of the program should speak for itself,” King said.

Many have voiced alternatives and proposed amendments to the SRO program, such as requiring SROs to conceal their firearms to lessen intimidation. Bills have been introduced by the County Council that would either keep, replace, eliminate, or modify the current workings of the program.

For example, Montgomery County Councilmembers Will Jawando and Hans Reimer proposed a bill to ban MCPS from stationing police in schools. Nancy Navarro suggested replacing SROs with an exterior cluster team so that there would be no police directly inside schools.

The MCPS Board of Education (BOE) also allowed community members to submit testimonies up until March 25, which can be viewed along with all BOE hearings in the archives.

The BOE will vote on the removal of SROs in May 2021 and consider final recommendations on the future of the SRO program by then, as the Maryland Safe to learn Act of 2018 requires schools to meet the “adequate local law enforcement coverage.” If SROs are removed, then another security program must be implemented in its place.

Follow-ups and updates are often released through the MCPS webpage. To learn more about what MCPS is doing on behalf of SROs, click here. For specific information on the SRO program, check out this FAQ from The Montgomery County Department of Police.