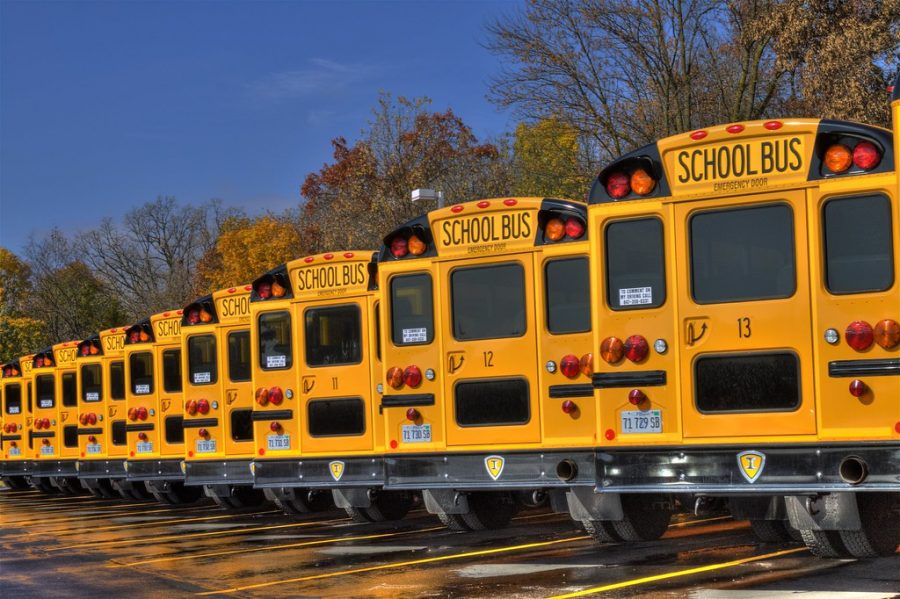 MCPS has recently signed a $1.3 million, 14-year contract with Highland Electric Transportation for the gradual electrification of its fleet of 1,400 school buses.

MCPS has recently signed a $1.3 million, 14-year contract with Highland Electric Transportation for the gradual electrification of its fleet of 1,400 school buses. This contract marks the single largest municipal purchase of electric school buses in North America.

“There are two reasons that we’re going for electrification of buses; first, we don’t want diesel buses because they cause carbon emissions, but second, diesel buses are really bad for local air pollution and local communities’ health,” Eleanor Clemans-Cope, junior and climate activist with MOCO on Climate and the Rockville Sunrise Movement, said. “The communities through which these buses usually run have lower air quality because of it. While the buses are far from the only cause of air pollution in these areas, they are a significant contributor.”

The e-buses are made by Thomas Built in North Carolina, and their batteries are from Proterra, based in California. Each has a three-hour charging time, and a 12-year life before requiring replacement; when not in use, they will be used to provide energy to Maryland’s electric grid.

“Buses becoming electric will provide huge benefits for students and bus drivers as well, because they won’t have to deal with the many issues of the current busing system. I remember twice in middle school, buses broke down because of an antifreeze leak, which physically harmed students. Electric buses will prevent such accidents and obviously be much better for the environment,” sophomore Aishwarya Thalla said. “Going completely electric would be a crazy change that would provide immense benefits in terms of limited fuel release and decreasing our carbon footprint.”

On normal school days, Montgomery County’s diesel school buses have been traveling over 112,000 miles a day, running on 17,000 gallons of fuel. The newly proposed plan is expected to eliminate the cost. According to the Maryland Department of the Environment, ozone and fine particulates are Maryland’s major air pollutants; they are emitted principally by fuel-burning vehicles and are linked to lung disease and early death.

“Preventing this huge part of the school system from harming our climate sets the standard for our society’s attitude towards our environmental impact, especially at the local level,” Advika Agrawal, freshman and co-coordinator of the MCR-SGA Environmental Affairs Task Force, said.

Studies from the Chesapeake Bay Foundation (CBF) show that about 85 million pounds of nitrogen pollution in the Bay comes from smokestacks and vehicle exhaust. This nitrogen stimulates excessive algal bloom on the waters’ surfaces, which block sunlight and absorb oxygen, ultimately leading to underwater ‘dead zones’ that cannot sustain marine life.

“We know that whatever impact there is of diesel exhaust on students riding our buses, or being in school driveways, while those are much, much less than they were 20 years ago,” MCPS Transportation Director Todd Watkins told ABC News, “there’s still some greenhouse gases. There’s still some particulate matter and still burns [sic] fossil fuels.”

“In my view, the transition is the first reflection in environmental efforts of MCPS’s standing as one of the richest, highest quality school systems,” Agrawal said. “Our reputation might give some more weightage to the initiative, and I definitely think this will be the push in introducing greener policies in more counties in Maryland.”

The project received a $817,000 grant from the Maryland Energy Association (MEA).

“This is a demand that climate justice activists and young people in MCPS have had for years. And we have been fighting hard for the Board of Education to adopt electric buses for I think it’s like two to three years now,” Clemans-Cope said. “And the fact that they’ve finally done it really shows the power of youth activists and climate justice activists in the school system. So I think this is a major, important step forward.”