One year later: Looking back at the beginning of the pandemic 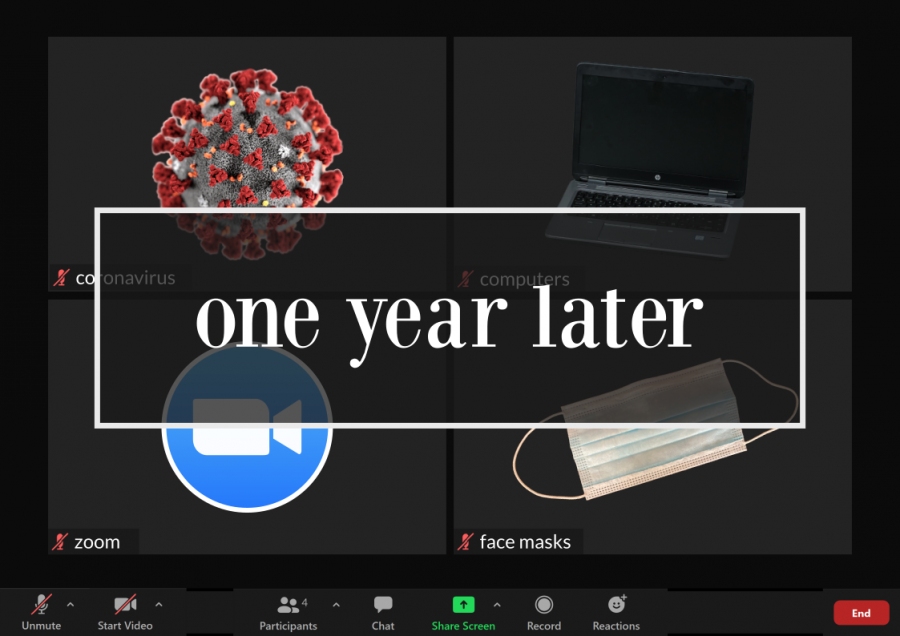 More than one full year has passed since Gov. Larry Hogan first announced that schools would close due to the coronavirus.

It has been more than one year since Gov. Larry Hogan first ordered schools across Maryland to close due to the coronavirus. Nobody could have anticipated that this closure, announced on March 12, 2020, would continue much longer than the two weeks that it was originally stated to last. Although students are just starting to return to in-person school after over a year, coronavirus precautions are still at the forefront of people’s minds, with masks being required in the school building and physical distancing being implemented into classroom layouts, among many other considerations.

On Friday, March 6, 2020 — one week before schools closed — Principal Damon Monteleone addressed the coronavirus cases in Maryland on the morning announcements by recommending that students follow the standard precautions for preventing the flu, including washing their hands and avoiding touching their face. At the time, just three cases of COVID-19 had been confirmed in Maryland, and there was still so much unknown about whether the virus was more contagious or deadly than a standard flu virus, both of which are now known to be true.

Looking back, Mr. Monteleone said that although he hoped that the school closure would only be for two weeks, he expected it to last much longer. Still, neither he nor any other staff members at RM were prepared for how drastically their roles would change on March 13. “Personally as a principal, I’m more of like a junior executive for an online learning corporation as opposed to being a community leader and a principal,” Mr. Monteleone said.

I think that the pandemic pushed everybody kicking and screaming into the future.”

The March 13 school closure did not only affect staff members — the sudden change came as a shock to many students as well. “It didn’t really set in for me until my soccer was cancelled, everything was cancelled, and I basically had this stretch where I didn’t leave the house for like three months, except to go running,” sophomore Samuel Desai said.

One persistent question throughout the pandemic, but especially at the beginning, was how long it would last. Each new guideline or restriction introduced a new variable in figuring out when things would return to the so-called “normal.” Bethesda Beat education reporter Caitlynn Peetz said, “[E]very time there was something new, it was surprising just because it was unprecedented. But really, I don’t think anybody could have had any kind of legitimate guess [as to what would happen].”

After the initial two-week school closure, Gov. Hogan and State Superintendent Karen Salmon extended the closure to April 24, again to May 15, and finally to the end of the school year. Gov. Hogan also announced a stay-at-home order on March 30 that required Maryland residents to only leave their house for essential reasons. Although the traditional letter grading system was maintained for the third quarter, MCPS Superintendent Jack Smith announced on April 19 that middle and high schools would transition to utilizing a pass/incomplete grading system for the entirety of the fourth quarter.

With these new changes, teachers had to figure out how to maintain relationships with their students despite not being able to teach them in-person. “A big change was in how teachers build and facilitate relationships. It’s definitely way harder to do through a distance. It’s definitely harder to coach students along through just office hours and emails,” social studies teacher Todd Stillman said.

[T]here were so many deaths that could have been prevented had there been a bit more caution put out there.”

Students and staff also had to learn how to use new technology such as Zoom, and adjust to the increased screen time. “I think that the pandemic pushed everybody kicking and screaming into the future,” Mr. Monteleone said.

However, for many students, the loss of social interaction that in-person school had provided meant that their friend groups shrank. “Now that I can’t see people in person, I only keep in contact with a very small circle of friends,” junior Katie Yang said. For the Class of 2020, graduation and prom were both cancelled as well, taking away the chance to say goodbye to friends and fully enjoy the final semester of high school.

The pandemic, then vs. now

After a year into the pandemic, the early weeks and months of it seem drastically different from what the world is like now. While masks have become integrated into our daily lives at this point in the pandemic, there was initially confusion about whether ordinary people should wear them. Only on April 3 did the CDC start recommending that people wear face masks when going out in public. “[T]he message was sent out in a bad way, that masks are not necessary. And so I mean, there were so many deaths that could have been prevented had there been a bit more caution put out there,” science teacher Wendy Sparks said.

Being in the pandemic has helped to create stronger bonds with people you haven’t been as close with before.”

Another major source of worry at the beginning of the pandemic was surface transmission of the coronavirus. An early study published in the New England Journal of Medicine (NEJM) showed that the coronavirus could survive on plastic and stainless steel for up to three days and on cardboard for up to one day, information that sparked a frenzy of concern about how to disinfect everything from groceries to packages in the mail. However, it was later found that the most common mode of transmission is actually being in close contact with another person who has COVID-19 and breathing in the respiratory droplets that they exhale.

This information resulted in Gov. Hogan renewing and putting emphasis on his statewide mask mandate. Days after this renewal, on April 18, protesters took to the streets of Annapolis to demand Maryland restrictions to be lifted. While some protesters were there to push for schools to be opened and social distancing be lifted, others were there to directly protest masks and question the science behind them. Although there was serious debate before about what works and what does not, it is now known that masks do work to help prevent all viruses, not just COVID-19. “The fact that we have virtually not had a flu season this year shows that masks work at reducing infectious disease,” Dr. Sparks said.

Everyone now has a better understanding of the coronavirus, and that general fear of germs died down to be replaced by a wariness of close human contact. “Now that we have better knowledge of how COVID is spread, I don’t think [I am] as paranoid about germs on surfaces anymore — I’m more hyper aware of whether people around me are wearing masks or not when I’m in public,” RM alumna Vickie Tan said.

As over a year has passed since the very first COVID case in Montgomery County, many have experienced growth in different ways.

Some students have utilized the extra time provided by quarantine for self-reflection.  “I think we’ve learned to be more independent,” junior Natalie Mintz said. “I feel like the pandemic has helped me reflect on who I am as a person, and have more check-ins with myself.”

At the same time, many students have viewed quarantine as a time for mindfulness. “I learned that sometimes staying home and doing nothing is good for you. Feeling like I have to go out every weekend while also having work gets to you, so being able to relax and unwind is important,” junior Lindsay Maggio said.

Other students have worked on their productivity skills. “This past year has taught me about priorities, how to manage my own schedule, and how to take initiative,” senior Nikki Shah said.

Many friendships have also shifted during the quarantine period. “Being in the pandemic has helped to create stronger bonds with people you haven’t been as close with before,” Mintz said.