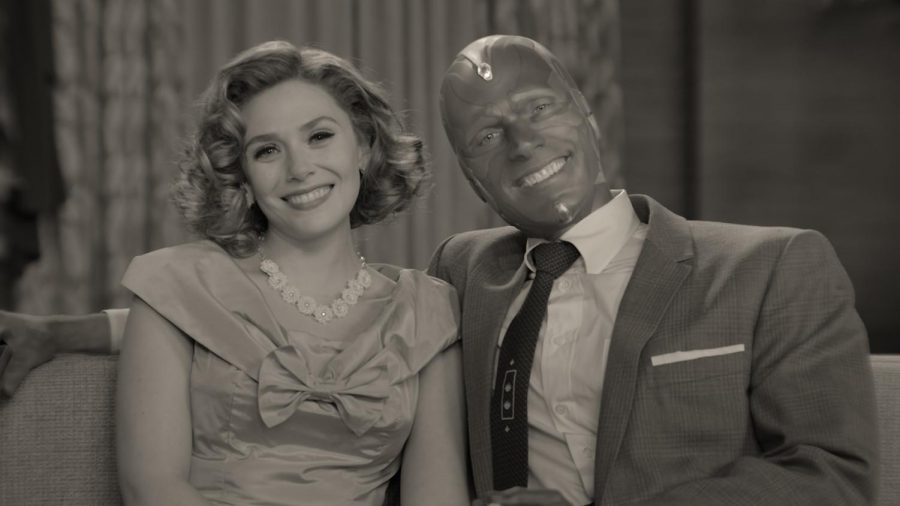 On Jan. 15, 2021, the first two episodes of WandaVision were released on Disney+, and the remaining episodes are set to be released one per week.

In 2019, Marvel first teased WandaVision, an old-school, sitcom-style TV series featuring characters Wanda Maximoff and Vision from the Marvel comics. The trailer was then released during the 2020 Emmy Awards to general excitement and internet attention. On Jan. 15, 2021, the first two episodes of WandaVision were released on Disney+, and the remaining episodes are set to be released one per week.

While Marvel has previously worked on several TV shows that existed separately from their movies, WandaVision is a new addition to the Marvel collection. It more closely sticks to the Marvel Cinematic Universe and is more involved in the timeline than previous shows. Because of this, it received more excitement and gained more traction.

WandaVision stars Elizabeth Olsen as Wanda Maximoff and Paul Bettany as Vision, who appear as a romantic couple throughout the Marvel films. Accordingly, the show has a romantic focus, set in the style of sitcoms throughout the twentieth century. The cinematography and its tribute to twentieth-century sitcoms in particular received praise by critical reviews, and was one of the aspects I enjoyed most. The direction of each episode was a callback to past television styles.

The first episode occurs with Maximoff and Vision as a newlywed couple, and reflects the 1950s with its costuming, characters and portrayal of societal standards. The two are trying to fit in with regular people, despite their paranormal superhero powers. As in the movie universe, Wanda has the ability to control magic, with powers of telekinetic nature, while Vision is the human form of artificial intelligence system J.A.R.V.I.S. Some third party is watching this all play out on a television, and it is revealed to just be a fictional sitcom within the show. The second episode occurs in a 1960s style, and is yet again not quite reality, but a satirical version of it. Similarly, the following episodes are set in various time periods all the way to the 2000s. The settings, editing styles and character tropes are all consistent with the standard sitcoms of each respective time period, making each episode stylistically unique and interesting to watch. I enjoyed this the most, and found the references to older styles intriguing to see and learn about.

The storyline of the series is also highly interesting and complex. The sitcom cliché storylines are a façade, fictional even within the world of the show. Instead, Wanda and Vision’s story contains a deeper underlying plot that connects back to the Marvel real world. Almost every episode includes a commercial, referencing the real world of the Marvel universe. As the series progresses, so does the sense of self-awareness—the fact that Wanda and Vision exist in a fictional world, even within the reality of the show. Rather than various independent tropes one after another, the entire series becomes a coherent timeline. While I had difficulty processing the recurring references towards a show within a show, I thought the use of the fourth wall and unique point of view were still very intriguing. The show plays with self-awareness and acknowledges the sitcoms as shows within the show; it introduces a dynamic between surface-level reality and true reality

The cast of characters isn’t just limited to Wanda and Vision, either. There are several characters who only exist as actors in their sitcom. It also includes a well-rounded cast of characters tying back into the Marvel Cinematic Universe, such as Captain Marvel, Ant-Man and Thor. Pietro Maximoff is also recast but reincluded in this show, adding to the sense of mystique. Overall, the actors do a really wonderful job of building up tension and suspense to the true story, and the dynamic between characters feels entirely genuine. While the interactions can be awkward, the discomfort is deliberate and directed purposefully.

One criticism I had of this show, however, was that the surface-level sitcom did not feel much like a comedy. The stylistic imitation of twentieth-century sitcoms was intended to be satirical and funny, yet fell somewhat short of the mark, as those types of humor have lost relevance in our modern world. However, this TV series compensates in direction, production, and the underlying storyline. Despite the inadequate surface-level action, the true depths of the story are well-written as any Marvel content.

While this TV series may not be the best one to start with out of the entire Marvel Cinematic Universe, it is especially unique. I loved the references and visual style of each episode, as well as the integration of archaic story tropes with the modern Marvel characters. Though the concept of breaking the fourth wall was initially difficult to comprehend, it was also thought-provoking and fun to discuss. It is a show I would definitely recommend watching; the characters, the story and the technical aspects were all complex and thought-out, and in the end, made the show a worthwhile experience.