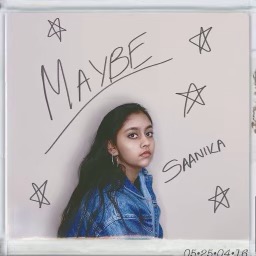 Richard Montgomery High School senior Saanika Mahashetty has always been a singer. “I remember growing up music was always playing in the house,” she said. “I was encouraged to start singing at the age of two.” In September of 2019, she released her first single, “Toy.” It currently has over 150,000 streams on Spotify. Recently, she released her second single, “Maybe,” to help eliminate the feelings of loneliness that have come with social isolation during the pandemic.

“Maybe” is a song about quarantine and the feelings, both positive and negative, that come with it. Many people are isolated from those they love, resulting in loneliness. “Each person feels alone right now, but if you think about it from an overall perspective, everyone feels alone, so in reality, we aren’t the only ones going through this,” she said.

Mahashetty’s goal with this song is to remind us that we aren’t as alone as we think. “You don’t need someone’s presence to realize they’re with you,” she said. “I want people to feel rejuvenated and energized when they hear the song.” Unlike her other song, “Toy,” which has a subdued tone, her rich voice mixes nicely with a variety of instruments and chords to create an upbeat and hopeful tone in “Maybe.”

When creating music, Mahashetty draws inspiration from three different artists: BTS, Ariana Grande and Taylor Swift. “I’ve listened to BTS since I was twelve years old, and it’s been quite a while,” she said. Like BTS, her songs aren’t necessarily confined to one category. As for Ariana Grande, “she’s unsurpassable, but I hope to sound almost as good as her,” Mahashetty gushed. “[And Taylor Swift] is the best songwriter of the generation.”

After “Toy” was released in 2019, Mahashetty was messing around with the melody when it hit her—‘maybe I just don’t want to be alone.’ “I know that now, it has a different meaning altogether, but even at that time, it was just sort of that feeling of being isolated without wanting to be isolated,” she said. After adding some chords and instruments, Mahashetty put the song on pause, due to an overload of schoolwork.

“And then COVID-19 hit,” she said. “I was like ‘Now I have time to really work on my music.” First, she created the melodies and wrote the chorus. Next, she added bits and pieces of other instruments, such as the drums, to create the effect she was looking for. Then, she added the rest of the lyrics. “I managed to write the lyrics in 24 minutes, which I’m actually very proud of,” Mahashetty said. Finally, she recorded herself singing the song and pieced it all together.

Mahashetty’s process of turning some music and words into a song consist of many tasks, including recording, singing and producing, which are usually split up between several people. In her case, however, everything was done by her. “I am literally a one woman show,” she said. “It’s very overwhelming.”

Another hardship Mahashetty faced was lack of self-confidence. “There were a lot of times where I would go into a slump and say ‘Oh, I’m not good enough to write this song. No one’s going to like it,’” she said. “I would always sit down to record but I never stuck with the things I recorded because I was like ‘This doesn’t sound good enough.’”

Her hard work paid off, and “Maybe” was released on Friday, March 19. As for her upcoming music, Mahashetty is currently working on two R&B or soul songs. In the future, one of her goals is to become a better songwriter. “A song is a story…  and I hope to convey that story through my music,” she said. “I have a long way to go… my music journey has only just begun.”

You can listen to “Maybe” here.