How the streaming era has kept entertainment alive 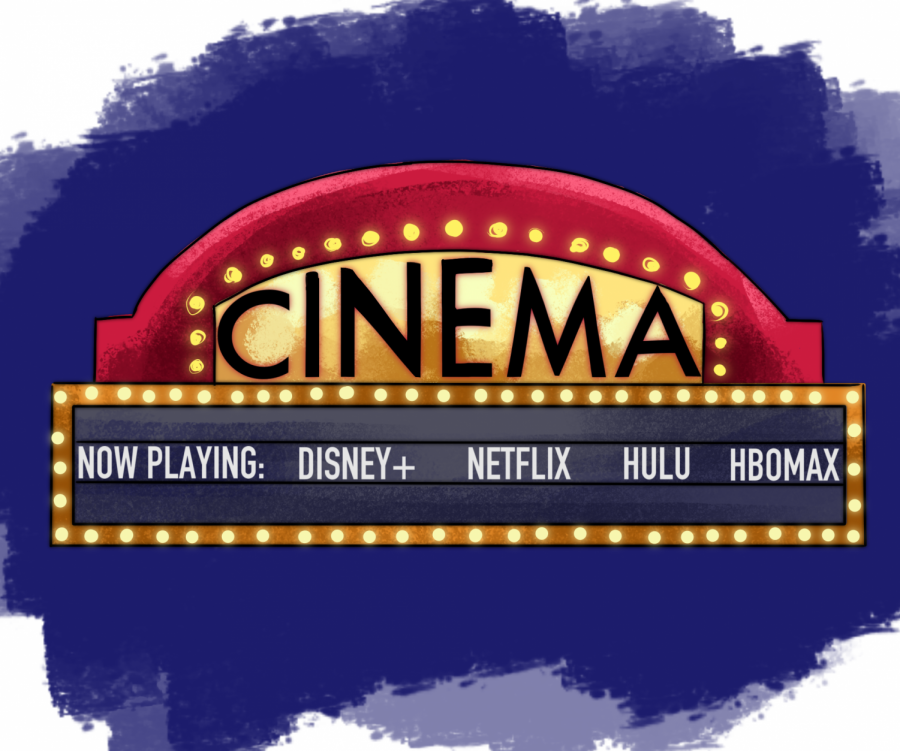 As one year has passed since the COVID-19 pandemic shut down movie theaters, streaming services have rapidly grown.

Back in 2019, streaming services were on the rise and movie theaters were steadily and strongly moving forward, with big releases like Avengers: Endgame and The Rise of Skywalker. Since then, many movie theaters have been forced to shut down due to the spread of the coronavirus. Highly anticipated movies such as Mulan and Black Widow were put on hold as the world watched the COVID-19 rates skyrocket. Meanwhile, more and more people subscribed to streaming services like Netflix and Disney+ while they quarantined themselves in their houses.

With the spread of the coronavirus, the future of movie theaters is up in the air. As of 2020, the total box office gross has seen around an 83 percent decrease. Many movie theaters have been closed since March, and the ones that haven’ simply aren’t getting the customers they need to financially survive. Furthermore, media companies are continuously delaying their movies or moving them to debut on streaming services, so theaters aren’t able to show movies that will bring out the large audiences they are used to having. But while movie theaters are suffering from the effects of the coronavirus, streaming services are thriving.

The newest live action Disney film, Mulan, was set out to debut in March 2020. Due to the pandemic, the movie was delayed and delayed, until Disney announced the movie would be released on Disney+ for $30. Warner Bros., who planned on releasing Wonder Woman 1984 this year, decided they would follow Disney’s lead and partnered up with HBO Max, where subscribers to the streaming service can view the action-packed film starring Gal Gadot. Netflix, America’s favorite streaming service, has seen around 4.7 million new subscribers in 2020 in the United States alone and is expected to gain another 8.5 thousand by the next report. Discovery Channel recently entered the streaming services game with a service called “discovery+,” which began streaming on January 4, 2021.

With all of these available services, why go to the theater when the theater comes to you? It’s much more convenient to watch new releases on your couch while eating your own snacks instead of driving to a theater and buying overpriced popcorn. Many people go to theaters because they simply cannot wait another second to see the movie they’d been anticipating. But now, HBO Max is releasing Wonder Woman 1984 at the same time as the theaters are, so what’s the point of going to the theater and risking exposure? If big media companies see that they are gathering more viewers of their movies through streaming services rather than movie theaters, they may prioritize the streaming services when deciding where they want their movies to be available.

Although movies are being released left and right these days, what will happen in the next few years if they can’t be filmed due to the pandemic? Some movies have found ways to safely film amidst the pandemic. For example, Thor: Love and Thunder, which is set out to be released in 2022, is shooting in Australia, where the cases are significantly lower than those in the US. Jurassic World: Dominion, which is also supposed to be released in 2022, is spending lots of money trying to film while staying COVID-safe. According to an article on shooting during the pandemic published by Variety, extra payments include swab test, hand sanitizer stations, sinks and even iPads so that each crew and cast member can safely look at takes, without packing around a monitor like they normally would. Not all companies can afford to do this, so theaters will not have as many movies to show as they normally would.

Of course, new vaccines could significantly affect the future of movie theaters. Depending on how these factors play out, we could be enjoying buttery popcorn in front of the big screen by spring or watching the latest releases at home. But with everything up in the air these days, it’s impossible to say for sure.