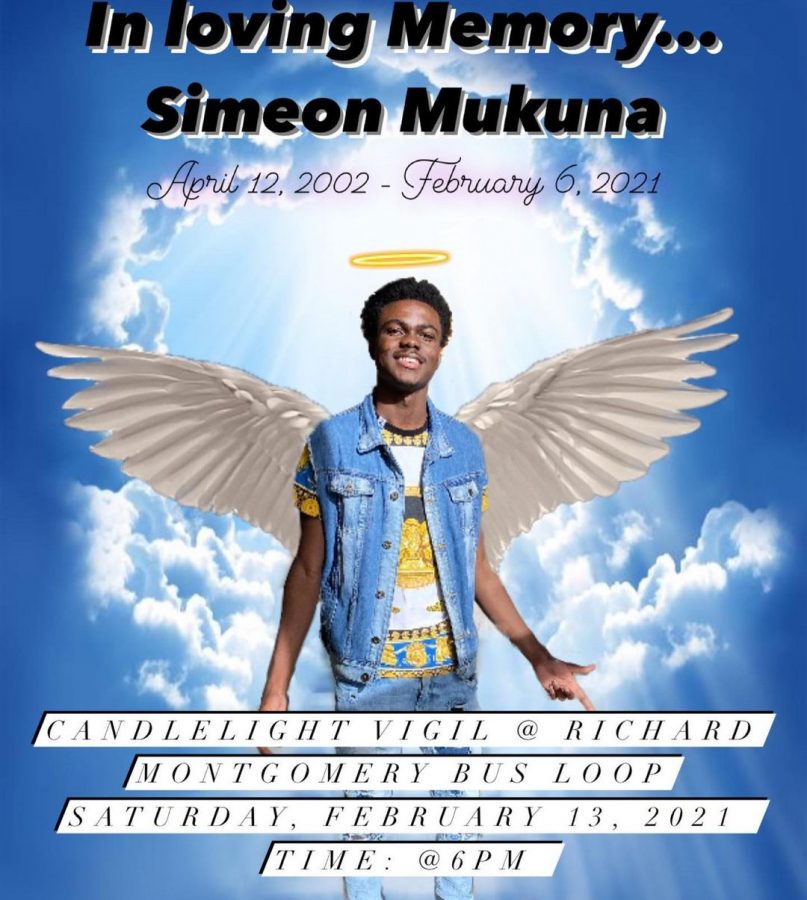 Graphic courtesy of Can Turan

Simeon’s closet friends and family hosted a vigil a week after his passing in order to celebrate his life.

Simeon Mukuna was a son, brother, student, comedian, dreamer, soccer player and amazing friend. His life was tragically taken on Saturday, Feb. 6, but not before he could make bonds with his friends and family that will last forever.

Mukuna’s friends remember him as someone who they could always count on, no matter the situation. He acted as a rock and was someone his friends always knew they could turn to when they needed advice, support, or simply just a good laugh.

“He had something funny to say every day. Like, he always had someone in the class laughing or someone smiling,” senior Levonte Ledgister said. “Every time I’d ask him to, he’d drive me to Chipotle or something. He always ordered just a tortilla. And then he’d be like, yo, give me some of your food, and he’d make a burrito with all our food,” Ledgister said. Ledgister and two other close friends of Mukuna laughed as they recounted this memory, noting that it was a “classic Simeon move” and how things like this made Mukuna who he was.

Mukuna moved to the RM area in eighth grade from France, and he was instantly able to make friendships due to his sense of humor and kindness. Upon meeting Ledgister, Mukuna shared some words with him that transformed them into the best of friends. “You know, we [are] both black so we gotta stick together,” Ledgister recalled Mukuna telling him. “Ever since then, me and him just became good friends.”

Mukuna’s athletic talent allowed him to play for RM’s football team in his freshman year, which he eventually dropped in order to pursue his passions in soccer and finance. “He went professional with it [soccer],” senior Can Turan said. “He went to play out of state and all that.”

After high school, Mukuna intended to start his own financing business. His driven personality led him to take online business classes on top of his schoolwork, and he had even obtained his business license. “He had dreams and all that … he did everything he could to make that goal happen,” Turan said.

In addition to his soccer and business-related goals, one of Mukuna’s biggest passions in life was working on his car. With his friends, he could often be found talking about different car parts or how he was planning on fixing up his Chevy. However, Mukuna always took the chance to extend his passion to his friends. Turan recounted how Mukuna once made a surprise visit to his house and invited him to help spray paint his car, where they created their own red and black designs on the Chevy. “After that day, he pulled up like five days straight. We just did everything we could to that car to [make it] look so good,” Turan said.

Despite holding down two jobs during the school year, Mukuna never missed the opportunity to help out his friends. To senior Jawed Babazadeh, Mukuna was like a “helpful older brother” who gave him advice about what to look for when buying a car and steered him toward academic goals in the classes they shared with each other. “He was one of the smartest people I knew,” Babazadeh said.

Mukuna was collectively described by his friends as loving, generous, jovial, and outgoing. “He was always the first to make new friends, and he would probably always talk to everybody in the class,” Babazadeh said. Mukuna was friendly and warm towards everyone, and he was also very family-oriented. Babazadeh noted that “the thing Simeon cared most about was definitely his family,” going on to say how Mukuna acted as a role model for his two younger siblings. Mukuna had four siblings in total.

In the days following Mukuna’s passing, virtual support sessions with MCPS crisis counselors were offered during school hours. A candlelight vigil was held at Richard Montgomery in his memory one week after his death, where students and staff came together to celebrate his life and honor him in death. Mukuna will remain in the hearts of his friends and family, and his legacy of humor, selflessness, and overall positive energy will live on forever.