The NCAA Tournament – Madness behind March 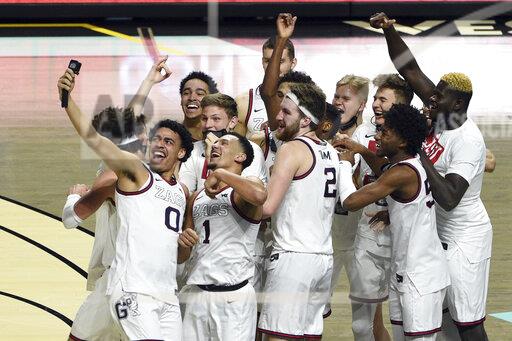 The unbeaten Gonzaga Bulldogs (26-0) will enter the tournament as the top-ranked team, with the hopes of becoming the first undefeated National Champion since the 1976 Indiana Hoosiers.

Every March, for as long as I can remember, I sit in front of a computer and cautiously click teams through a giant bracket encompassing college basketball teams across the country. When I was younger, many of the teams I chose were based on things a seven year old may care about. (Example: Wofford was a big one because it sounded like “waffles.”)

As I grew older, I began to put more research into my brackets and examined the brackets of expert analyzers. Each evening, I would check my bracket and feel the excitement when I saw my picks on the next round and the disappointment when I saw a red strikethrough indicating my picks lost. Throughout the nation, Americans of all ages, genders, races and ethnicities were following the same, tumultuous pattern.

If you’ve been living under a rock and you don’t know what March Madness is, here’s a basic rundown: sixty eight college basketball teams are chosen to compete in a nation wide tournament. The top four teams will each be given a first seed, the next four will be given a second seed, all the way down to the worst four teams, each of which will be given a sixteenth seed. The sixty eight teams will then be divided into four groups.

Each group will have a team from each of the sixteen seeds. The first-seeded team will play the sixteenth-seeded team in their group, the second-seed will play the fifteenth-seed and so on. Eventually, there will be a winner from each group, and these lucky four teams are called the “Final Four.” Two teams will face off against another two teams and the winner from each game will play in the championship. Becoming the NCAA Tournament Champion is probably the best thing that could happen to a college basketball team.

It all started in 1939 when the top eight college basketball teams in the country were invited to the most elite college basketball tournament yet. Oregon ended up defeating Ohio State to be the nation’s first NCAA Division I Champion. Over time, the number of teams expanded for eight to sixty eight. In 1982, the first NCAA Women’s Division I tournament was held and has been going strong ever since.

According to the NCAA, the term “March Madness” was coined by Henry V. Porter, an Illinois high school official in 1939. However, it didn’t become popularized until Brent Musburger, a CBS sports broadcaster, used it during the 1982 tournament. Since Musburger’s coverage of the event, “March Madness” has become a household term, synonymous with the most popular tournament in the United States.

But why are average citizens, even those who aren’t into basketball, so addicted to the tournament?

In the NBA playoffs, a team must win a best of seven games to advance to the next round. Therefore, the team predicted to win is likely to win, as it’s difficult for an underdog team to beat a higher-ranked team four times. In March Madness, though, only one game is played per round. The winner-takes-all format each game leaves room for potential upsets and for unexpected teams to shine.

While picking the higher seeded team may seem like a safe option, this strategy can backfire. Most notably, in the 2018 tournament, the country witnessed, indisputably, the biggest upset in college basketball history. Sixteenth-seeded UMBC defeated top-ranked Virginia in the first round of the tournament, further proving once and for all that there are no free victories in March.

The tournament came to a screeching halt in 2020, when the COVID-19 pandemic shut down a majority of sports across the world. March Madness was one of the first major sporting events cancelled, breaking the hearts of fans nationwide. A year later, however, the NCAA has found ways to protect players and staff while still moving forward with the tournament.

Most years, March Madness will take place in several cities, depending on the round of the tournament and which quadrant each team is assigned to. This year, Indianapolis is the only city the men’s games will take place, to limit the amount of traveling players have to do. The women’s tournament, meanwhile, will be playing in San Antonio. Like the Super Bowl, the NCAA plans on allowing a limited number of fans in the stadiums, with regular testing for coronavirus and mandatory mask mandates.