‘Promising Young Woman’ will make you uncomfortable—and it should 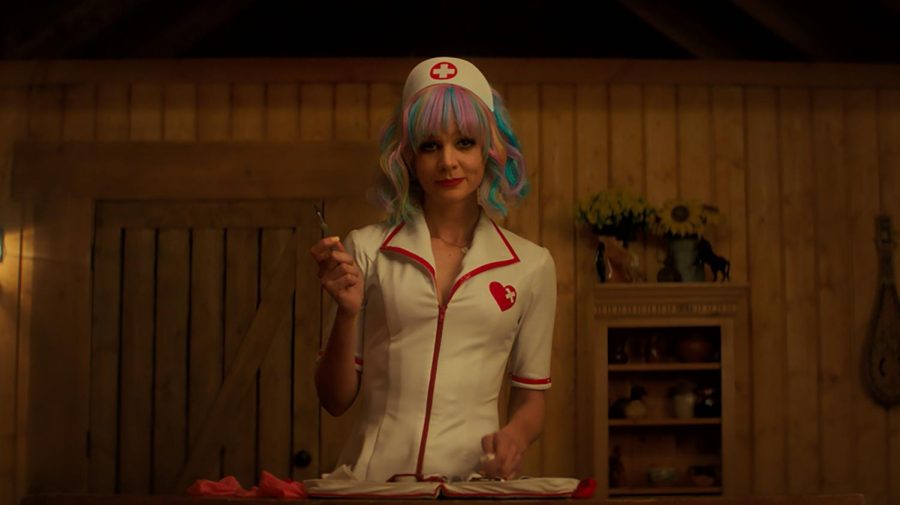 “Promising Young Woman,” directed by Emerald Fennell and released in theatres last Christmas, is not a feel-good movie. Not in the slightest. Despite its candy-colored set design and witty dialogue, the film is relentlessly confrontational—its message is nearly as much of a slap in the face as Jordan Peele’s 2017 masterpiece “Get Out.” However, rather than tackle the sinister inner workings of modern racism, Fennel explores the equally multifaceted topic of sexual assault, and by extension, rape culture. For a movie whose very core seems antithetical to the concepts of humor and entertainment, “Promising Young Woman” somehow manages to be both wildly enjoyable and deeply relevant.

The film follows Cassie Thomas (Carey Mulligan), a 30 year-old woman living with her parents and working at a coffee shop. Several years ago, she was a high-achieving student at medical school, but following an incident in which her best friend, Nina, was raped by a classmate, the two drop out. It is implied that Nina commits suicide after this event. Now in the present, Cassie spends her weekends going to various bars and pretending to be drunk. Each time, a man notices and brings her back to his home under the guise of taking care of her. Once the man begins to take advantage of Cassie, she abruptly reveals her sobriety.

In a year that was inevitably disappointing for film lovers (especially considering the magnificence of 2019’s inventory), Fennel delivers a sharp, black comedy thriller driven by incredible performances and a suspenseful score—Anthony Willis’ violin rendition of Britney Spears’ “Toxic” is inspired. The cinematography, while hyper-stylized, matches the tone of the film in an unexpectedly surreal way. Fennell uses color theory as a tool for visual storytelling. Her shots are saturated with pink and blue, and for a film focused on gender dynamics, the evolving ebb and flow of the two colors creates a parallel arc on its own.

This film has been heralded by many audience members and media outlets as a “feminist anthem,” but this label is, at best, an oversimplification, and at worst, a glaring disservice. Perhaps the phrase “feminist anthem” once held a more resounding significance, but in its current state, it acts only as a gimmicky sticker, shiny and one-dimensional. “Promising Young Women” rejects this palatable superficiality entirely; Fennell is piercing and urgent in her execution of the film’s feminist themes and character study.

Cassie is not placed on a pedestal as some invincible icon—in fact, she’s hardly a moral character. Sure, the audience is rooting for her because she’s the protagonist, but she certainly isn’t a role model. And this is where the film excels. Hollywood’s ever-increasing collection of “women empowerment” movies—while well-intentioned—is not much more than a corporate formula for being politically correct, not unlike a Buzzfeed thread of #girlboss Tweets. This trend is ironically counterintuitive in its attempt to empower little girls by showing an unachievably perfect female hero. Cassie is just a person—a grieving and vulnerable person trying to work against a system that invalidated and ultimately killed her friend.

Fennell doesn’t let anybody off the hook. She refuses to villainize or idolize any character, and as a result, she is able to tackle rape culture through the dimensional lens that it deserves. Every single person that Cassie interacts with—whether it be an old friend, a guy at a bar, a university dean, or an innocent boyfriend—serves to add one more perspective to the topic.

While this film was generally well-received, one of the recurring criticisms was targeted at its perceived statement about men. Many male viewers felt irked by the fact that Cassie’s boyfriend (played expertly by Bo Burnham) ended up being guilty as a bystander to Nina’s rape, as he was the only “good” male character left in the film. I disagree with this critique. The message of this movie is not, by any means, that all men are evil. This is made obvious by the multitude of female characters that Cassie also deems as guilty for playing a role in Nina’s death. Nobody comes out of this film looking like a good person. “Promising Young Woman” is not a condemnation of men, but a condemnation of an overarching culture—one that continually prioritizes the reputations of men over the safety of women, and one that allows for tragedies like Nina’s assault to keep happening.

The story ends on a painfully bittersweet note. The ambiguity leaves an uncomfortable door open for us as the end credits begin to roll. Whether you choose to cross that door through conversation or introspection, one thing is made plainly clear: none of us are exempt. Fennell holds a sobering mirror to audience members and critics alike, forcing us to reexamine where our sympathies lie and the consequences of those implicit decisions.